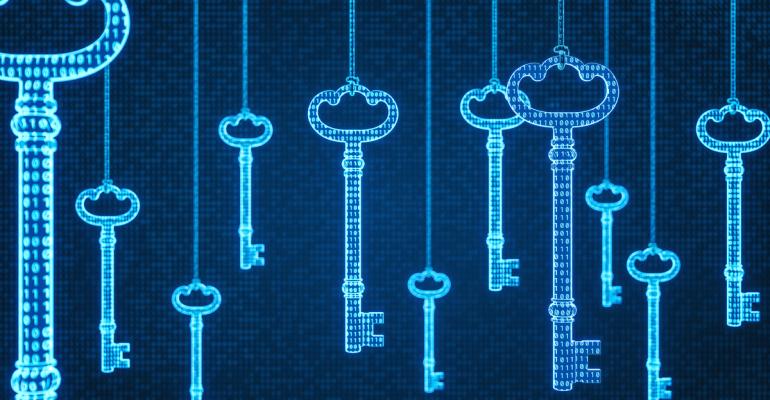 Researchers at Black Hat USA explain issues around defending "Golden Secrets" and present an approach to solving the problem.

BLACK HAT USA 2021 – Advanced persistent threat (APT) groups have long sought credentials to access, move laterally throughout, and persist in target networks. Defenders have attempted to mitigate the risk with multifactor authentication (MFA), which, while effective in most cases, can fall short of protecting the most lucrative data.

This was the crux of Black Hat USA briefing "MFA-ing the Un-MFA-ble: Protecting Auth Systems' Core Secrets," presented today by ZenGo CEO Tal Be'ery and cryptography researcher Matan Hamilis, who demonstrated a new approach to protecting the "golden secrets" at the core of most modern authentication systems.

These secrets, such as KRBTGT for Kerberos or a private key for Security Assertion Markup Language (SAML), are used to cryptographically secure the provision of access tokens and protect their integrity. This makes them a hot target for attackers: When one of these secrets is captured, it allows the holder to issue more golden access tokens offline to take over a system.

But what is SAML? Each modern corporate environment contains many different Web services served by many different vendors, explained Be'ery. Each service has its own form of authentication, which causes problems for defenders: There is no single sign-on, several passwords that employees may forget or reuse, and different forms of MFA for each tool.

With SAML, user management is shifted from the service provider (SP) to an identity provider (IdP), and authentication and directory are decoupled from the service. Instead of worrying about dozens of different apps and their authentication measures, admins configure the IdP to verify all employees' identities. The SP and IdP only communicate with each other with a key pair: The IdP signs with the private key, and the SP verifies with the public key.

A Golden SAML attack occurs when the attackers steal a private key from the identity provider and become a "rogue IdP," Be'ery said. This allows them to generate arbitrary access SAML tokens offline, within the attackers' environment. Doing this would let attackers access a system as any user, in any role, while bypassing security policies and MFA. They could also slip past access monitoring, if access is only monitored by the identity provider, Be'ery said.

The security community saw this technique in the SolarWinds attack, which also marked the first publicly known use of Golden SAML in the wild, he noted. "It seems like every year has its flagship breach; security incident, and this was Sunburst," said Be'ery.

SAML is a persistence technique, and ZenGo's team aimed to solve the problem of Golden SAML and the offline use of the IdP private key. Attackers have a time-limited access to IdP but get a long-term "offline" access to the target's assets.

As a solution reference, Be'ery pointed to MFA, which has largely solved the use of passwords as a persistence mechanism. He used four principles to outline why MFA is a good solution: The password is no longer a single point of failure, the extra factors are different (i.e., "not two passwords"), more factors can be added if needed, and the added factor continues to rotate.

There are issues that prevent defenders from using MFA to protect golden secrets, said Be'ery, such as backward compatibility and lack of orthogonal additional factors. Attackers using Golden SAML can forge an identity with a stolen certificate, so they don't need to know someone's password or other authentication factors.

Could hardware security modules (HSMs) be used to address Golden SAML? In theory, HSMs can sign and prevent direct access to a private key; however, Be'ery then used the same standards he used to evaluate MFA. With HSMs, the private key is still a single point of failure, HSM systems must be continuously updated, and it doesn't scale. "We had gone from software to hardware, but what's next … harder-ware?" Be'ery quipped. Further, he added, HSMs are not short-lived.

Be'ery proposed a solution to solving the problem: "What if we can have multiple signers?" he said. In this solution, each token must be signed by multiple parties that are orthogonal; for example, a customer network and another third party. However, it requires changing the signers, which requires changing the standard and getting service providers on board, he noted.

Because the private key is distributed, it's no longer a single point of failure. With distributed protocols, back-and-forth messages are exchanged between parties. In key generation, each party creates a "Share" or their own secret, and using these Shares, parties sign together. The signature looks the same, and it's harder for attackers to steal because they would have to compromise both parties to do so.

"We're not creating the key in one single place and then splitting it and sending it to multiple parties. … This wouldn't help," Be'ery said.

Be'ery applied the same standards he used for MFA to the TSS approach: The private key is decentralized, each share resides in a different environment, and the number of parties is scalable. If two isn't enough, three can be used — or dozens more. Shares can also be rotated without changing the main secret.