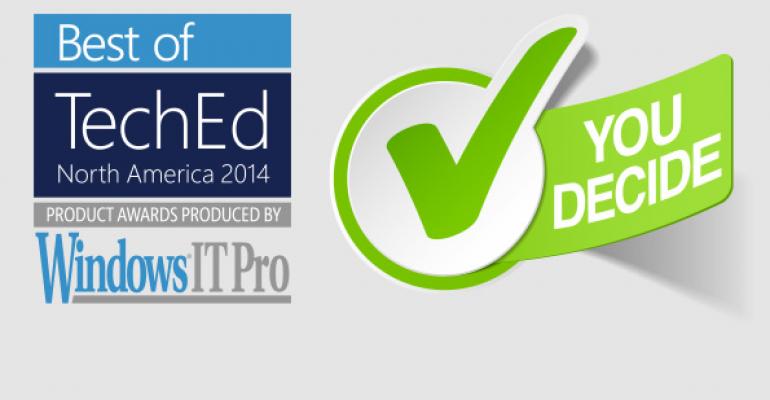 Announcing Our Best of TechEd 2014 Winners!

At Microsoft TechEd 2014 in Houston, today we're honoring this year's Best of TechEd Award winners. In this highly-competitive awards program, we recognize spectacular products from leaders in the industry, as well as new, compelling innovations that push the boundaries of technology. As always, our criteria for selecting the winners are based on the products' strategic importance to the market, competitive advantage, and value to the customer.

We'd also like to thank Microsoft and its partners who have been able to make this decade-old program possible. As a result, we've been very honored to have the privilege to recognize amazing products in the industry year after year.

Without further ado, here's our 2014 Best of TechEd winners! Congratulations!

The InMage 4000 is an appliance that provides real-time backup, sync, and restore and works with Windows Server, Linux, UNIX, as well as, VMware, Microsoft Hyper-V, XenServer, and KVM. InMage 4000 works with the a wide variety of platforms and incorporates a full disaster recovery solution that can utilize both on-premise and cloud-based storage while minimizing network impact.

IronKey Workspace W700 is a USB 3.0 superspeed flash key that enables a full, bootable installation of a highly secure Windows To Go desktop on a stick. IronKey's abilities are extremely timely as companies are looking for a better BYOD solution, along with the ability to migrate from Windows XP without the cost of replacing hardware.

Binary Tree E2E Complete is a turnkey solution for the harried Exchange administrator that needs to get mailbox migrations done without weeks and weeks of planning. Its predictive modeling takes the guesswork out of when mailboxes will migrate and handles every aspect of communication for the project so admins don't have to worry about it. Their licensing model also allows mailboxes, once licensed, to use the product again and again for future migrations.

Proofpoint Predictive Defense 7.5 is an extraordinarily sophisticated system for protecting users from phishing emails. It uses a combination of aggregated malware data from its customers and other sources, and its own cloud-based machine intelligence to achieve an extremely high success rate. Protection against email-based APT attacks is critical for all business today, and Proofpoint knows how to succeed in this area.

Optimal IdM Virtual Identity Server for SharePoint brings a new level of management and delegated administration to SharePoint, allowing both large and small installations to drive user and distribution list management and access rights down to the lowest admin levels where they need to be. Virtual Identity Server for SharePoint also allows users from multiple, disconnected identity sources to access common SharePoint sites whether they're inside or outside the company.

The A10 Thunder Series Threat Protection System (TPS) is a hardware appliance specifically designed to mitigate distributed denial of service attacks. It uses innovative chipset designs so that some common DDOS attacks can be stopped with zero CPU usage on the appliance. The Thunder Series TPS is insurance for enterprises that cannot afford web service downtime.

See You Next Year!

And that wraps it up! Stay tuned for more updates for TechEd 2014, exclusively from Windows IT Pro.