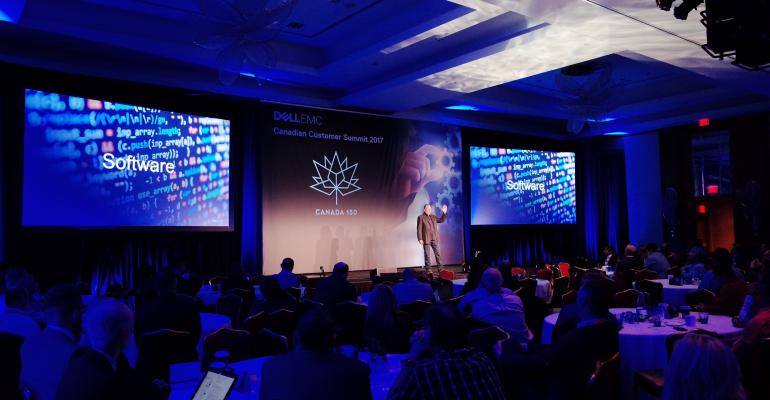 5 Takeaways for IT Pros from Dell EMC Canadian Customer Summit

Dell execs weigh in on digital transformation, the security landscape, and why the PC is not dead.

Dell EMC held its Canadian Customer Summit on Tuesday in Toronto, bringing together senior leadership across security, product innovation, and sales and marketing, to discuss digital transformation and how Dell EMC sees its own products and partners helping customers through the journey.

In addition to catching many of the sessions, IT Pro had the chance to sit down with Dell VP of product strategy and innovation, Dell Client Solutions Neil Hand, and CISO, Dell EMC Global Security Alan Daines. Based on our conversations and observations from the day, here are the top 5 takeaways for IT pros from the Dell EMC Canadian Customer Summit.

Thinking about the future is Neil Hand’s full-time job at Dell. In his role he is tasked with predicting what the workers of tomorrow will be using to get their jobs done – no simple feat when we don’t even know what many of those jobs will look like. He said that no matter what devices emerge, the PC is here to stay – it just may look different.

Dell Canvas is at least the start of this vision. First announced in January at CES 2017, Dell Canvas is a 27” QHD touch screen that sits horizontally on a desk surface, and can be paired with any Windows laptop, desktop or all-in-one.

According to Hand, Dell Canvas is the “beginning of a long-term play” for the company, who envisions the device as bringing together the work and home work surfaces through one interface. The idea is you could seamlessly go from doing your expenses, swipe your hand over your work surface, and then be in your personal workspace.

Also, be sure to watch the PCaaS space which is heating up with not just an offering from Dell, but also one from Lenovo that launched earlier this month.

2. Figure Out the Problem You’re Trying to Solve First

As technologists it can be easy to look at all of the innovations coming out and then decide how they apply to your specific business. But several experts who spoke at the event on Tuesday said this approach is backwards.

At VMware, this means “having clarity around what problems we’re solving before we define how,” Sean Forkan, Vice President and Country Manager, VMware Canada said.

Chad Sakac, president, Dell EMC, Converged Platform and Solutions Division said this approach is also supporting a trend towards consuming IT rather than building IT. “The areas that are growing are where customers are saying, ‘I just don’t want to deal with this anymore,’” he said, pointing to solutions like Azure Stack and VXRail.

As an IT professional, you may hear the term digital transformation and think its primary use is in marketing, similar to the way cloud was stuck it in front of just about anything years ago, regardless of whether it was in fact cloud. But technology professionals are thinking about digital transformation, not just from a technical standpoint, but also from a cultural standpoint.

“Digital transformation was not in our vernacular five years ago,” Phil Vokins, Acting Country Manager, Intel Canada said in a panel discussion. Now, he said, every organization must have some kind of digital transformation initiative, which, in its simplest form means the use of technology to rapidly improve performance.

John Kennedy, VP, OEM Division, Microsoft Canada, said on the cultural side of digital transformation, its employees have had to adopt a growth mindset.

“To go through with a digital transformation, that’s a real change. Culture eats that strategy for breakfast. Our purview has been to lead with cultural change,” he said. “It’s not skill and ability in role that predict success in any endeavor, it is grit. Grit is something that is about perseverance and pursuit of a long-term goal.”

4. Hiring the Next Generation Needs to Happen Now

There are countless pieces of research that point to a woefully inadequate number of security professionals, a gap that continues to grow year after year.

Alan Daines, CISO at Dell EMC Global Security, said that he tries to attract talent in a number of ways, but the culture of Dell has makes it relatively easy, pointing to its ranking on sites like Glassdoor, the mindset of Michael Dell to constantly stay relevant, and the fact that his security team sits next to its product team and has a real impact on its business.

Hand added that millennials and post-millennials are looking for an employer who uses relevant technology and will invest in their development, including providing ongoing training.

5. Security (Still) Needs to Start with the Basics

Over his career, Daines has watched the threat landscape transition from script kiddies to organized crime to nation state. Part of this change has required a new approach: becoming more proactive in spotting security threats, including understanding where high value assets are and ensuring his team is focusing on the right areas. The bottom line is, any organization will never be 100 percent secure, and his job is to balance security risk posture of Dell Enterprise to ensure it is still able to innovate, he said.

While the threats are becoming more sophisticated, security does still need to start with the basics, which can mean doing simple tasks like applying a security patch, using Wannacry as an example.

“If we can’t deal with something that’s been out for months with a publicly available patch, if we can’t do the basics, how are we going to protect about sophisticated attacks?” he said.

“[Wannacry] hit like a massive slap in the head a month ago, and everybody panicked. The companies that had patched against it weren’t worried. Almost the next day the researcher identified the command and control point. It almost killed it almost overnight. Because they stopped worrying they never got to do the security basics,” he said. In other words, they did a good effort, but didn’t patch across the whole organization, likely vowing to do so the next Patch Tuesday. Then Petya hit on Tuesday.

While Daines acknowledges that humans are the biggest threat to keeping an organization secure, if you take out the human element, there is no single technology that secures things properly.

“To make something completely and utterly secure is impossible. I think we’re going to continue to play cat and mouse battle in security industry. I have not seen anything that is truly game-changing,” he said.