Western Digital Corp. says it has built the world’s first 14TB hard drive, but the product is targeted at a specific audience: operators of hyper-scale clouds, hosted in some of the world’s largest data centers: the likes of Facebook, Amazon, Microsoft, Alphabet’s Google, Tencent, and Alibaba.

The highest-capacity hard drive announced to date, HGST-branded Ultrastar Hs14, unveiled last week, is more than twice as fast and stores 40 percent more data than its predecessor, the company said.

The Hs14 is built using Western Digital’s fourth-generation HelioSeal technology, which fills and seals the drive with helium rather than air. The technology is quieter, more reliable and eliminates turbulence, allowing for higher storage capacity. It also allows disks to spin more easily, which reduces power consumption, according to the company.

SMR drives store data by overlapping the tracks, much like a roofer installing shingles on a roof; doing so increases storage capacity in hard drives, Lenny Sharp, Western Digital’s senior director of enterprise HDD marketing, said in an interview with Data Center Knowledge.

“It’s exclusively a cloud storage solution today. Some customers have multiple workloads and are looking to SMR drives for a percentage of their use, and it’s oriented toward backup and archiving,” he said. “We have some other customers whose entire software architecture is based on sequential writes, and those customers are using SMR drives across the board.”

Western Digital’s SMR drives can make up 30 percent of total storage capacity for customers who use them strictly for backup and archiving, Sharp added.

John Rydning, IDC’s research VP whose focus is on hard disk drives and semiconductors, said the product is attractive to hyper-scale cloud operators and cloud providers because they are adding storage capacity at a fast pace, and the more capacity each hard drive has, the more they can store within a single data center’s footprint.

“It saves them floor space, and if you are using containers for your data center, you can get more capacity in the container,” he said. “It helps with power consumption, both in terms of not having to deploy as many racks and getting more capacity per rack. So your cost to power and cool your data center on a per-terabyte basis continues to go down.” 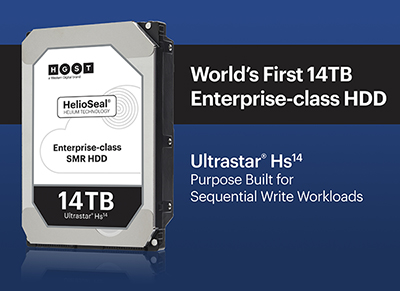 Western Digital competes with Seagate Technology LLC and Toshiba Corp. in the market for high-capacity hard disk drives aimed at hyper-scale companies and cloud service providers, Rydning said. While Western Digital is the first storage vendor to offer 14TB drives, the competition is not far behind, he added.

“For the past few years, Western Digital has been a time-to-market leader at each of these higher-capacity points, so the company has just been a step or two ahead of the competition in terms of introducing these very high-capacity drives,” he said.

No release date for the new Ultrastar Hs14 hard drive has been announced, but large customers are currently sampling the product in low volumes, a Western Digital spokeswoman said.

Sponsor Content
What Are Five Challenges You'll Face When Modernizing Your Infrastructure?
Apr 13, 2020