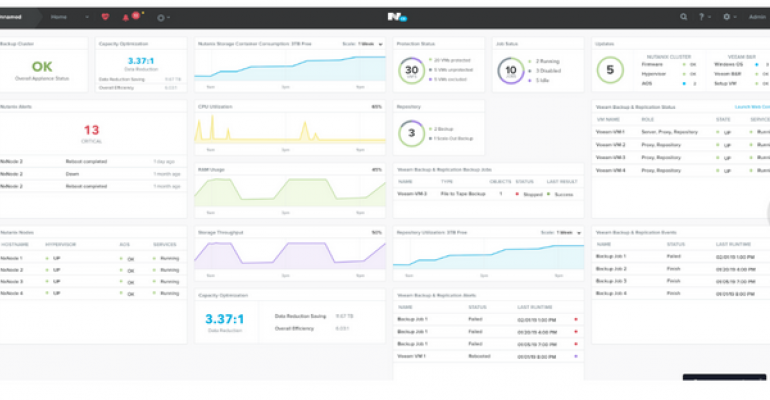 Nutanix is finally getting into the secondary storage market, a move that analysts say is a good one if the company wants to compete on a level playing field.

The company, known for its hyperconverged infrastructure and software-defined storage, this week announced Nutanix Mine, a secondary storage appliance designed to work with an organization’s existing backup software. If a company prefers to buy a system that integrates backup and secondary storage, Nutanix has made it easier. It is already integrated with Veeam and HYCU backup software; other integrations, including Commvault, Veritas and Unitrends, are on the way.

Nutanix Mine also integrates with the vendor’s hyperconverged infrastructure (HCI) data fabric and Prism management console. Users manage all storage, backup and data protection requirements from the Prism console. According to the company, this tight integration will simplify data backup operations, including initial sizing and procurement, installation and provisioning.

The appliance uses a scale-out architecture, an approach to growth that handles larger workloads via distributed systems. Others choose a scale-up approach, where more resources are added to an existing system. The scale-out approach will allow both primary and secondary storage to scale on demand.

The solution offers IT professionals the ability to implement a Nutanix solution in their environment without disrupting their existing  infrastructure. “They can use any existing backup software they have in place or get it integrated with one of the backup vendors Nutanix works with,” said IDC research director Phil Goodwin.

In addition to using Nutanix Mine to consolidate backup solutions, IT professionals can use it to retain data onsite using the Mine appliance, while sending other data to the cloud through Nutanix’ cloud tiering capability.

For Nutanix, the move toward secondary storage makes good business sense, Goodwin said. According to IDC, 60% to 70% of an organization’s data is considered “secondary data,” also called cold data. Nutanix’ competitors,  including Dell, HP and IBM, already can provide primary storage, secondary storage and data protection to their customers.

Infinidat Lays Out Its Storage Vision
May 08, 2019