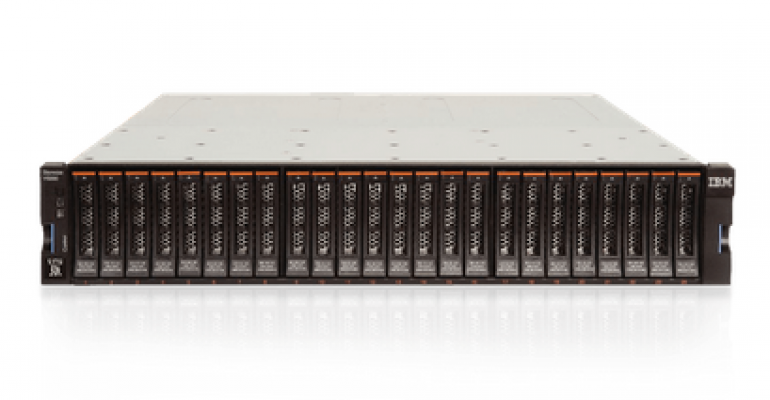 Continuing the overhaul of its Storwize line of all-flash and hybrid flash arrays, IBM this week announced four new midrange storage models. All four include Spectrum Virtualize and Storage Insight software, which previously were extra-cost add-ons.

The first pair of new products, the V5010E and V5030E, are lower-cost offerings suitable for edge storage, virtual and containerized environments. Both use the SAS interface to connect to storage media. The V5010E scales to 12PB of flash in a single system with new high-density 30TB flash drives, while the V5030 scales up to 23PB. According to IBM vice president Eric Herzog, the street price of both products has been reduced by 30 percent.

The most important feature of the new models is their support of NVMe, an increasingly important storage protocol standard specifically designed for solid state storage. NVMe  typically provides much greater performance and lower latency than SCSI. NVMe already is available on higher-end IBM systems, as well as systems from competing vendors, but the new models make NVMe functionality more affordable to more organizations.

“NVMe provides more performance than SCSI-based systems can deliver, especially for workloads like artificial intelligence, machine and deep learning, and big data analytics that need this kind of performance,” said Eric Burgener, a research vice president at IDC. “Because NVMe is much denser in terms of performance than SCSI, you might be able, for example, to replace a SCSI-based array that takes up 30U of rack space with an NVMe-based array that takes up only 12U of rack space.”

All four models now include both Spectrum Virtualize and Storage Insight.

Spectrum Virtualize, which up until now required a separate purchase, is a mature operating system that helps with in-line compression and deduplication, thin provisioning, quality of service, data migration, tiering of data from one array to another, snapshots, replication, data at rest encryption, and data reduction. It supports more than 400 different types of storage from a large array of vendors.

Storage Insight is IBM’s AI-based software that allows organizations to run predictive analytics on capacity and performance, as well as analysis of the array itself. Storage Insight also automates the tech support process.

In addition to improving data portability and disaster recovery, Herzog said, IBM Spectrum Virtualize for Public Cloud can help improve cyber-resiliency through "air gapping.” This process essentially separates snapshots from the source system so malware on the source system can’t corrupt it. With this method, it’s easier to recover from the snapshot to restore a system to the state it was in before the malware hit.

The Search for Comprehensive Search
Mar 19, 2019