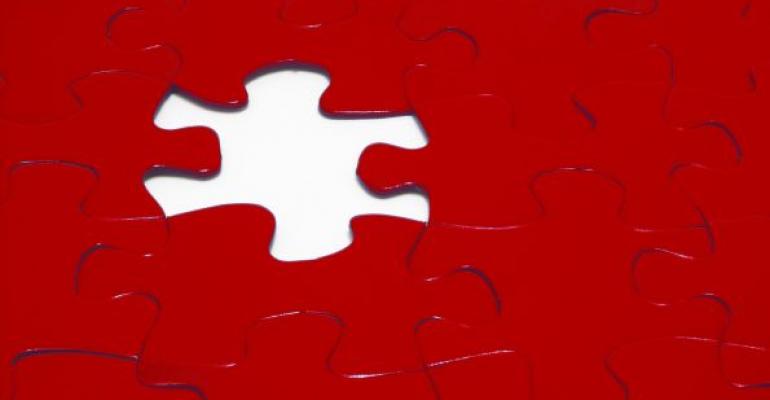 Some time ago, I taught a T-SQL class in the UK. At the end of the class, a student named Paul Shipley presented me with a puzzle and asked whether I could find a T-SQL solution for it. I found the puzzle to be interesting and thought others would enjoy working on it as well. In this article, I'll present the puzzle and offer a possible solution in T-SQL. As always, I recommend that before you look at my solution you first try to come up with your own solution; otherwise, you won't enjoy the puzzle as much.

In our version of the Blockbusters game show, two players take part. We'll call the players the vertical player and the horizontal player. The game involves a board of a certain dimension (e.g., 5 × 5); the tiles are square. (In the original game show, the board is 5 × 4 and the tiles are shaped as hexagons.) The tiles are marked with letters. To determine which player starts, a tile is chosen at random and a toss-up question related to the chosen letter is presented to the players. The player who buzzes first and answers the question correctly gets control over the board.

Our challenge is to write a T-SQL solution that checks whether a player completed an unbroken path. For sample data, use the code in Listing 1.

This code creates a table called Blockbusters and populates it with data for tiles that already belong to the two players. Each row in the table holds the tile's row, col, and player (V for horizontal and H for vertical). You can use the following query to present the current state of the game pivoted:

This query generates the output in Figure 2.

Your task is to write a user-defined function called IsCompleted that accepts two inputs: @player (V or H) and @size (how many rows in the board for a vertical player, or columns for a horizontal player). The function should return the bit 1 if the player in question completed an unbroken path and 0 otherwise.

You can find my complete solution with the definition of the IsCompleted function in Listing 2.

The @grp variable is used to keep track of the current group number. It's initialized with 0 and incremented whenever the code starts processing a new group. The code uses the following query to find the first tile in the first group:

Then it loops as long as a first tile of a new group is found (WHILE @currow IS NOT NULL). After the body of the loop is done handling the current group, the code uses the following query to get the first tile of the next group:

The loop's body is responsible for finding all related tiles of the current group. It starts by incrementing the variables @grp and @iteration. Remember that @grp holds the current group number. Each group is handled by a number of iterations; each iteration deals with the neighbors of the tiles in the previous iteration that weren't already handled. The variable @iteration is used to associate tiles with the iteration in which they were handled.

The code continues by inserting into the table variable @T the information about the first tile in the current group:

The inner loop's body increments the @iteration variable by 1. It then uses the following code to insert into the table variable @T direct neighbors of the tiles handled in the previous iteration that weren't handled before:

Finally, after all tiles are assigned with group numbers, the code uses a CASE expression that checks whether the input player completed an unbroken path or not. It does so by grouping the tiles by the group number and computing the minimum and maximum column numbers for a horizontal player and the minimum and maximum row numbers for a vertical player. If the minimum is equal to 1 and the maximum is equal to @size, the player completed an unbroken path. In such a case, the CASE expression returns a 1; otherwise it returns a 0.

Use the following code to test the function for both players:

The code generates the output in Figure 4, correctly indicating that the horizontal player completed an unbroken path and the vertical player didn't.

Solving puzzles with T-SQL is fun and allows you to sharpen your T-SQL skills. I'd like to thank Paul for sharing this puzzle with me. I hope you had fun trying to solve it. If you're looking for another challenging puzzle, try to solve the following: Write a function that checks whether the state of the game is such that a player cannot complete an unbroken path.