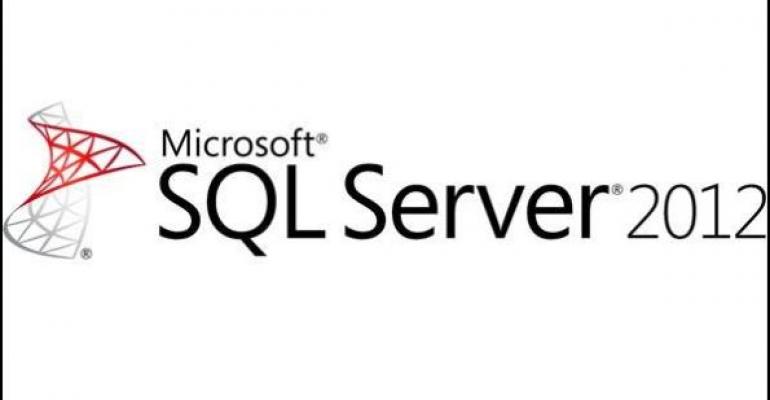 For the purposes of this article, I use bank account transactions as sample data. To create the sample data, you need a helper table called GetNums that accepts two integers as inputs and returns a sequence of integers in the requested range. Run the code in Listing 1 to create the GetNums function in the tempdb database (for test purposes).

Run the code in Listing 2 to create the Accounts and Transactions tables and fill them with sample data (100 accounts x 20,000 transactions in each account).

To compute the enhanced aggregate window functions, the optimizer needs the rows sorted first by the window partitioning elements, then by the window ordering elements. Also, the index needs to include in its leaf level all the rest of the columns in the query for coverage purposes. If the rows are ordered as needed and covered by an index, the optimizer can scan the index in order, use a Segment operator to handle one partition at a time, a Window Spool operator to expand the applicable frame rows per source row, and a Stream Aggregate operator to perform the actual aggregate calculations.

A simple way to remember what kind of index you need to create is to use the acronym POC for Partitioning, Ordering, and Coverage. The P and O columns need to be defined as the index key elements. The C columns need to be included in the index leaf, using an INCLUDE clause in a nonclustered index. (If the index is clustered, everything is implicitly covered.) In the absence of a POC index, the optimizer must sort the rows based on the P and O elements -- and sorting a large set can be expensive.

As an example, supposed that you need to compute bank account balances at each transaction point. This task can be achieved with a running sum of the transaction values, partitioned by the account ID and ordered by the transaction ID. A POC index already exists; that's the clustered index defined by the primary key constraint PK_Transactions in Listing 2 as part of the definition of the Transactions table.

Figure 1 shows the plan for this query. Observe in the plan that the clustered index PK_Transactions is scanned in an ordered fashion, and therefore no sorting is required.

To contrast, the following query computes a window function that doesn't have a POC index to support it:

Figure 2 shows the plan for this query. Observe that in this plan the optimizer added a Sort operator that sorts the data by the P (actid) and O (val) elements.

Conceptually, for each row in the underlying query, a window function defines a frame of rows within the current window partition and applies the calculation against this frame to produce a scalar outcome. For example, consider a frame such as ROWS BETWEEN 11 PRECEDING AND CURRENT ROW. For each row, the window frame will have up to 12 applicable rows. SQL Server 2012 introduces a Window Spool operator that's responsible for expanding for each row the applicable frame of rows; then, a Stream Aggregate operator aggregates those rows to produce the scalar result. In the worst-case scenario, the Window Spool operator expands all frame rows. I discuss such cases later in the article. However, the optimizer can identify special cases and avoid such complete expansion.

The best-case scenario is what I refer to as the fast-track case. This case is applicable when the top (i.e., first) delimiter of the frame is UNBOUNDED PRECEDING. With such a top delimiter, conceptually, the number of rows per frame should keep increasing by one for each underlying row; so the total number of rows in all frames in the partition increases in a quadratic manner with respect to the number of underlying rows. But that's only conceptually. In practice, the optimizer keeps just two rows in each frame -- one with the aggregated values so far (apply the calculation between the previously aggregated values and the current value) and the current row (needed to return the detail elements). That's a huge savings!

Here's an example of a query that falls under the fast-track category because it uses UNBOUNDED PRECEDING as the top delimiter of the frame:

This query ran for 7 seconds on my system. Figure 3 shows the execution plan for the query.

Observe in the query plan that the number of input rows to the Window Spool operator is 2,000,000 (the number of rows in the table), and the number of output rows is 4,000,000 (one row with aggregates, and current row for detail per each underlying row). Then the Stream Aggregate operator returns 2,000,000 rows that combine the detail and the aggregates.

When using a delimiter other than UNBOUNDED PRECEDING, it doesn't necessarily mean that the optimizer has to expand all applicable frame rows for each underlying row. Some cases can be handled with a calculation of two cumulative values -- one for the bottom (i.e., last) row in the frame and one for the top (i.e., first) row, and then the result can be computed by subtracting the top aggregate from the bottom one. To qualify for this type of optimization, the function must be cumulative (e.g., SUM, COUNT, AVG), and the frame size needs to be greater than four rows. If the function isn't cumulative (e.g., MIN, MAX), the result can't be derived from the results of the aggregates for the points used as delimiters. If the frame has four rows or fewer, it isn't worthwhile to the optimizer to use this optimization.

The following query qualifies for this special optimization because it uses a cumulative aggregate (AVG) and a frame greater than four rows (25 rows in this case):

This query ran for 16 seconds on my system. Figure 4 shows its plan.

The plan starts by scanning the clustered index in order. It then segments the data by actid and computes row numbers to tell which rows are applicable to each frame. It then segments the data again by actid and uses the Window Spool and Stream Aggregate operators to compute the top aggregate. The plan then uses the next series of operators to compute the bottom aggregate and then finally computes the final result by subtracting the top aggregate from the bottom one.

When the frame has four rows or fewer or the function isn't cumulative (e.g., MIN, MAX), the Window Spool operator will expand all applicable frame rows for each underlying row.

Here's an example with four rows in the frame:

As an example for noncumulative function, the following query computes a MAX window aggregate, so even though it has 25 rows in each frame, the Window Spool operator has no choice but to expand them all:

Because of the large expanded frames, this query ran for 25 seconds on my system. Figure 6 shows the plan for the query. Observe in the plan that 2,000,000 rows are provided as input to the Window Spool operator, and more than 50,000,000 rows are produced as its output.

Understanding the last optimization aspect of window functions is crucial if you care about performance. The Window Spool operator typically tries to use an optimized in-memory spool. However, in certain circumstances it must use an on-disk spool that incurs the usual overhead of on-disk work tables (e.g., latches, IO).

The on-disk spool is used when the number of rows in the frame is greater than an internal threshold number (currently 10,000, but it could change in the future) or when using the RANGE window frame unit, as opposed to ROWS. Regarding the threshold number, what matters more precisely is the extreme delta between the row numbers of the current, top, and bottom rows in the frame.

You can use one of two options to determine whether you're getting the costly on-disk spool. One option is a new extended event that you can define and start by running the code in Listing 3. You can then find the information in the file xe_xe_window_spool.xel (Extended Events Log).

The other option is to simply enable STATISTICS IO in the session:

This query uses the ROWS window frame unit. The extreme delta between the row numbers of the current, top, and bottom rows is 10,000 (10,000 - 1 + 1 is the total number of rows). So this case qualifies for the in-memory spool. This query ran for 9 seconds on my system. You won't find an extended event reported for this query. Figure 7 shows the output of STATISTICS IO.

This time, the on-disk spool was used. The query ran for 56 seconds on my system. You'll find an extended event reported for this query in the file, and STATISTICS IO will show a number of reads greater than zero, as Figure 8 shows.

This query ran for 66 seconds on my system. An extended event is reported in the file. Figure 9 shows the output of STATISTICS IO.

If you just use ROWS UNBOUNDED PRECEDING instead, the query runs for only 7 seconds because it uses an in-memory spool. So, be careful with the RANGE option. When you're done, run the following code to drop the event session:

Increasing Use of Window Functions

In time, people will realize how profound these functions are and will use them much more often in code. Eventually, window functions will appear in most queries. For this reason, I hope that Microsoft will continue to invest in this area and will gradually implement additional functionality from standard SQL into future SQL Server versions, as well as in SQL Azure.