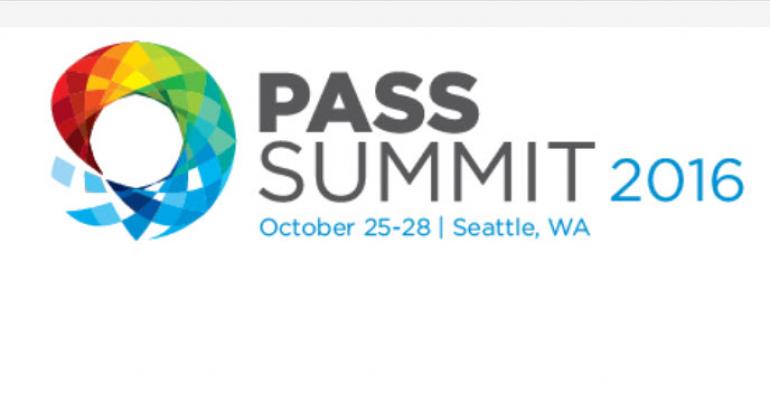 The SQL PASS 2016 conference is right around the corner. This year’s SQL PASS 2016 Summit will once again be held at the Seattle Convention Center on October 25-28. As you probably know the SQL PASS Summit is the world’s biggest gathering of SQL Server professionals. The PASS Summit boast 200+ sessions as well as 4000+ attendees. This year’s event will be packed with some great SQL Server information.

At this year’s PASS conference Joseph Sirosh Corporate Vice President of the Data Group at Microsoft will kick off the day one keynote with a talk on A.C.I.D. Intelligence. He will discuss how the cloud is becoming the “brain” for our connected planet. He says that the cloud isn’t just for running algorithms. Instead, he will talk about how you can create advanced intelligence with data from sensors from around the world, the cloud, IoT and Big Data all working together.

The always popular David DeWitt, Adjunct Professor, Massachusetts Institute of Technology (MIT), is scheduled for the day two keynote covering Data Warehousing in the Cloud. Dr. DeWitt is scheduled to talk about the enormous changes that have happened in data warehousing and parallel database systems. He will review the fundamental parallel database techniques that are used by the primary data warehousing SAAS services, including Microsoft’s SQL Data Warehouse, Amazon and others.

And of course you can expect first rate SQL Server content from both the pre-conference workshops and all of the conference sessions. Once again this year’s PASS Summit promises to be the SQL Server event of the year. If you can’t make the PASS conference in-person you might want to check out the live broadcast that starts at 8:10 am Wednesday October 26th at www.passsummit.com.