It's always a feel-good experience for me to return to SQL Saturday in Orlando, the place where SQL Saturdays  were started by Andy Warren (Twitter | Blog).  On this trip, I delivered a full-day, pre-conference seminar on Troubleshooting and Performance Tuning SQL Server.  I also delivered a session on SQL Server Internals and Architecture to a totally packed house. 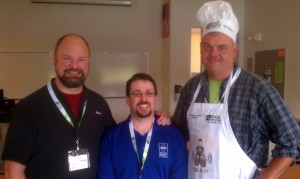 I got to attend the extended events session by Jack Corbett (Twitter | Blog), middle in the photo above.  Good stuff, Jack!  Jack led the Orlando PASS Chapter for a few years and, although he relocated back up to New England, he enjoys getting back to Orlando when the opportunity presents itself.

I also got a chance to do a podcast with Rodney Landrum (Twitter | Blog), in the SQL Saturday chef's outfit on the right.  Rodney, you should get your blog details up at the PASS SQL blogger page, btw.  Rodney is also known as "the guy with the Red-Gate tatoo".  Ask him why, when you meet him in person.  I'll post the direct link to our podcast when I get it from Rodney.  But in the meantime, be sure to check out his SQLBeat webcast.  There are lots of great speakers and respected authorities to hear on his podcast. 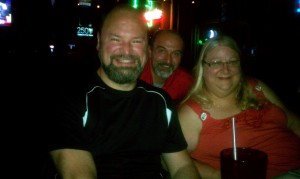 As I mellow with age, I've found that I most enjoy connecting with friends and building relationships.  The above picture shows me, Eddie Weurch (Twitter | Blog), and Pam Shaw (Twitter), head of the Tampa PASS Chapter.  Pam, Eddie, and I were swapping some hilarious stories about our early years in snowy climates.  Pam had the good fortune to be pulled, face first, through the snow by her mom during a trip to the school bus stop on the first big snow of the season.  Mom, it seems, wanted to make sure she got to the bus stop safely, but instead fell down two steps from the front door of their home, sliding all the way to the bus stop firmly clutching Pam's hand.  ROFL! 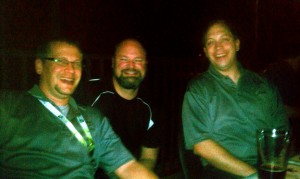 I got to spend some time with Ryan Adams (left) and Kendal Van Dyke (right), as well.  There may have been some liquor involved.  However, the highlight of my evening was definitely when Kendal yelled "FINALLY!" at the waitress bringing our plates out ten minutes  after  the appetizers were served.  Kendal was actually paying no attention to the waitress or the plates and was instead yelling at the TV where the Florida State vs South Florida football game was playing.  The waitress, on the other hand, was mortified.  Hilarity ensued as he tried to explain that he was not the least bit cross with her.  :^)

I hope you're planning to attend a SQL Saturday event soon.  And not just the event, but also the after-event gatherings as well.  You can almost always be sure that most of the speakers will be there.  It's a great way to enlarge your professional network as well as to make real  and lasting  friendships!