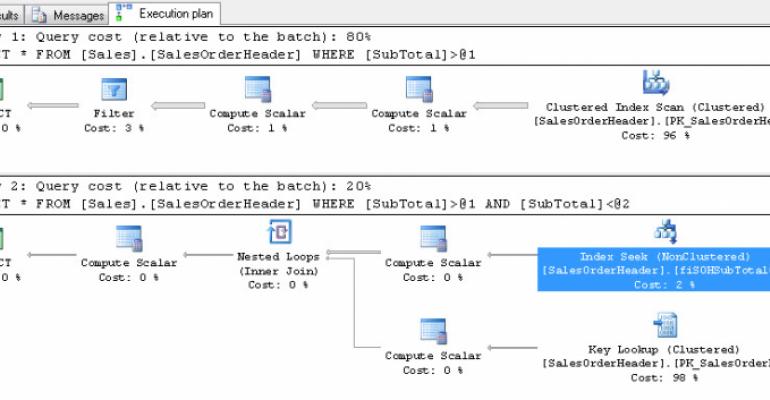 SQL Server 2008 introduced new features to help you work more efficiently with your data. In "Efficient Data Management in SQL Server 2008, Part 1," I explored the new sparse columns feature, which lets you save significant storage space when a column has a large proportion of null values. In this article, I'll look closer at column sets, which provide a way to easily work with all the sparse columns in a table. I'll also show you how you can use filtered indexes with both sparse and nonsparse columns to create small, efficient indexes on a subset of the rows in a table.

A column set can add functionality to a table with sparse columns. As explained in part 1, a column set is an untyped XML column that you can use to get and set all sparse column values as a set. Remember that you can't add a column set to an existing table that already has sparse columns. If you attempt to execute an ALTER TABLE statement on such a table, you'll get one of Microsoft's new, informative error messages explaining the problem. You have three options to solve this problem:

I'll use the third option and use the code that Listing 1 (below) shows to create a table called DogCS, which includes the Characteristics column set. The code also inserts data for several dogs.

Because it has a column set, DogCS will behave differently from the Dog table in part 1. When you execute the following SELECT statement, you get the results that Figure 1 shows:

Notice that none of the sparse columns are included in the result set. Instead, the contents of the column set are shown as a snippet of XML data. The results in the figure might be a little hard to read, so here's the complete value of the Characteristics column set field for Mardy, the first row of the results:

Adding a column set to a table schema could break any code that uses a SELECT * and expects to get back individual field data rather than a single XML column. But no one uses SELECT * in production code, do they?

You can retrieve the values of sparse columns individually by including the field name in the SELECT list. For example, the following statement produces the results that Figure 2 shows:

Similarly, you can explicitly retrieve the column set with the following statement:

You can also mix and match sparse columns and the column set in the same SELECT statement. Then you could access the data in different forms for use in client applications. The following statement retrieves the Handedness, BirthDate, and BirthYear sparse columns, as well as the column set, and produces the results that Figure 3 shows:

Column sets really become useful when you insert or update data. You can provide an XML snippet as the value of the column set, which populates the associated sparse columns. For example, the following code adds the information for Raja:

Instead of providing a value for each sparse column, the code provides a single value for the column set in order to populate the sparse columns, in this case Raja's birthdate and weight. The following SELECT statement produces the results that Figure 4 shows:

Notice that the BirthDate field has the data from the column set value, but because no value was set for Handedness, that field is null.

If you update the column set field and include empty tags in either an UPDATE or INSERT statement, you'll get the default values for each of those sparse columns' data types as the non-null value in each column. (You can mix and match empty tags and tags with values in the same UPDATE or INSERT statement; the fields with empty tags will get the default values, and the others will get the specified values.) For example, the code in Listing 2 (below) uses empty tags for several of the sparse columns in the table, then selects the data. As Figure 6 shows, string fields have an empty string, numeric fields have zero, and date fields have the date 1/1/1900. None of the fields have null values.

Column set security can be a bit confusing. But after you play around with it, the choices Microsoft has made will make sense.

The WHERE clause in a filtered index definition can use only simple comparisons. This means that it can't reference computed, user data type, spatial, or hierarchyid fields. You also can't use LIKE for pattern matches, although you can use IN, IS, and IS NOT. So there are some limitations on the WHERE clause.

This filtered index indexes only the rows where the dog's weight is greater than 40 pounds, which automatically excludes all the rows with a null value in that field. After you create the index, you can execute the following statement to attempt to use the index:

If you examine the estimated or actual execution plan for this SELECT statement—which Figure 7 shows—you'll find that SQL Server doesn't use the index. Instead, it uses a clustered index scan on the primary key to visit each row in the table. There are too few rows in the DogCS table to make the use of the index beneficial to the query.

To explore the benefits of using filtered indexes, let's look at an example using the AdventureWorks2008 Sales.SalesOrderHeader table. It has a CurrencyRateID field that has very few values. This field isn't defined as a sparse column, but might be a good candidate for making sparse.

The following code creates a filtered index on the CurrencyRateID field in the table, including all rows with a non-null value in the field:

Next, we run the following SELECT statement:

Figure 8 shows the estimated execution plan. You can see that the query is able to benefit from the filtered index on the data.

You're not limited to using filtered indexes with just the non-null data in a field. You can also create an index on ranges of values. For example, the following statement creates an index on just the rows in the table where the SubTotal field is greater than $20,000:

Here are a couple of queries that filter the data based on the SubTotal field:

Figure 9 shows the estimated execution plans for these two SELECT statements. Notice that the first statement doesn't use the index, but the second one does. The first query probably returns too many rows (1,364) to make the use of the index worthwhile. But the second query returns a much smaller set of rows (44), so the query is apparently more efficient when using the index.

You probably won't want to use filtered indexes all the time, but if you have one of the scenarios that fit, they can make a big difference in performance. As with all indexes, you'll need to take a careful look at the nature of your data and the patterns of usage in your applications. Yet again, SQL Server mirrors life: it's full of tradeoffs.

Sparse columns, column sets, and filtered indexes are useful tools that can make more efficient use of storage space on the server and improve the performance of your databases and applications. But you'll need to understand how they work and test carefully to make sure they work for your data and with how your applications make use of the data.

Listing 2: Inserting Data with Empty Tags and Selecting the Data