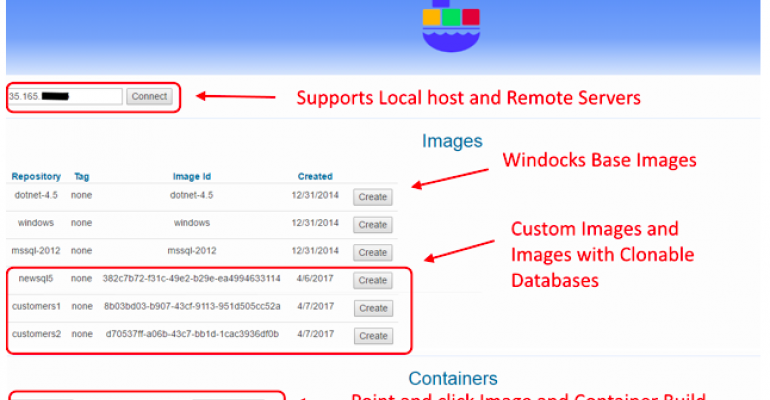 The trend toward virtualized computing resources shows no signs of abating.  Compute, memory, storage, and operating systems are commonly available on-demand.     Code is accessed via Git or other repositories, and can be deployed to automated build and test environments in seconds.    Developers are free to work without worrying about infrastructure, except when it comes to working with databases.

Deliver Production Databases for Dev and Test with Database Clones

Database cloning is a best practice, and arguably the only practical method, for delivery of large data environments for development and test.  With cloning a production terabyte class environment can be delivered to each developer or tester, and environments can be refreshed daily.

Both Red Gate and Windocks clones are based on Windows virtual disks.   Cloning begins with a backup or snapshot that is restored to a Virtual Hard Disk (VHD), creating a full byte copy of the database environment.  This “parent image” becomes a read-only source that is “cloned” by creation of differencing disks.   Differencing disks include pointers to the parent image for read access to the source data, but also store any changes made.     Importantly, clones are created in seconds, and require a small increment in storage.    Once a Terabyte class environment is available in a parent image, clones can be created and delivered to SQL Server instances in seconds, with each using only 40 MB of storage!

Image by Red Gate.
Windocks 2.0
Windocks is a port of Docker’s open source to Windows, supporting all editions of Windows 8 and 10, Windows Server 2012 and Windows Server 2016, and all editions of SQL Server 2008 onward.
Containers are named SQL Server instances that are created in seconds, with integrated support for database cloning.  Teams work on isolated containers on a shared server, and typically reduce the number of VMs used by up to 10:1.     Containers support multi-tier environments, and are used to delivery of SQL Server environments or environments that include .NET + SQL Server.    DBAs and developers can choose between using standard Docker client software or a web interface to create the parent image and associated containers.   A single click on SQL image delivers a running SQL Server container with the cloned database in seconds.

Red Gate’s SQL Clone is a good solution for anyone that needs support for large SQL Server databases.   SQL Clone supports Windows Server 2008r2, Server 2012, and Server 2016, and delivers clones to both containers and VM based SQL instances.  SQL Clone is available for 5 named users starting at $6,995.

Windocks cloning is included in a free Community Edition that is available for download here.