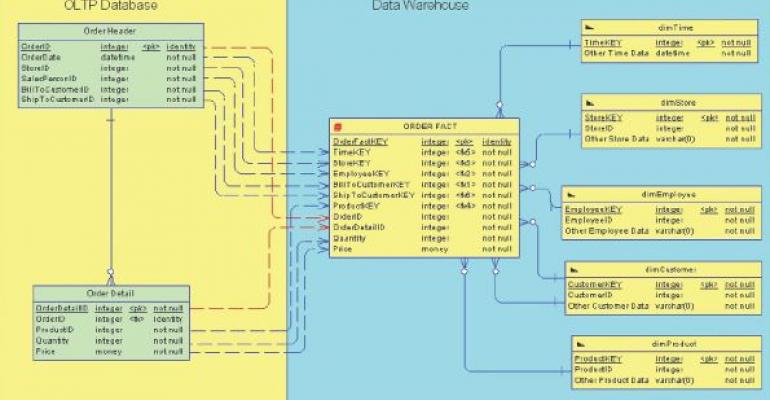 How to Map Control Numbers to the Fact Table

Control numbers originate in the OLTP database. For instance, in an ordering system, the order data is stored in two OLTP tables, the Order Header table and the Order Detail table. These two tables have a one-to-many (1:M), parent-to-child relationship, as shown on the left side of Figure 1. For a detailed explanation of this two-level structure, see “Metamodel for Retail Sales,” May 2001. The Order Header (parent) table contains data such as the date and time of the order, who took the order, who placed the order, where the order was placed, and the control number. The Order Detail (child) table contains the line items, such as what was ordered, the number of each item ordered, and the associated costs. When you transfer these tables from the OLTP database to a data warehouse, these two tables become a single fact table that’s populated with keys and measures (i.e., attributes that you can add up), such as the number of items ordered and the associated costs (e.g., the cost of the items ordered, discounts, various taxes, shipping and handling by item), as shown on the right side of Figure 1.

The granularity of the fact table should typically be at the line-item level; every record in the fact table will be a line item from the actual order, which is represented by a record in the OLTP Order Detail table. This level of granularity enables you to query the data warehouse in multiple ways. For example, you can query which product sold best on a Monday morning between the hours of 9 a.m. and 10 a.m. But do you really need control numbers, such as the OrderID or the OrderDetailID, to respond to such queries?

The short answer is “no,” but you do need these control numbers in the data warehouse. Without these control numbers, you wouldn’t be able to reassemble the order as it was originally placed, track the history of the order (e.g., when it was picked, packed, shipped, delivered, returned, refunded), or even do something as simple as calculate the average number of items per order. The control numbers are valuable, so you can’t throw them away.

So how do you handle these control numbers in the data warehouse? As Figure 1 shows, strip the identifiers from the Order Header table and include them as keys in the Order fact table. These identifiers are OrderDate, which maps to TimeKEY in the fact table; StoreID, which maps to StoreKEY; and SalesPersonID, which maps to Employee-KEY. The customer identifiers, BillToCustomerID and ShipToCustomerID, both map to fact table keys (i.e., BillToCustomer-KEY and ShipTo-CustomerKEY) that are associated with the Customer dimension. Each of these keys is joined to an associated Customer dimension, which is shown in abbreviated form in Figure 1.

Next, you'll want to follow the same procedure for the Order Detail table. Then map ProductID to ProductKEY in the fact table, Quantity to Quantity, and Price to Price. What’s left over from the OLTP tables are the control numbers, OrderID and OrderDetailID.

If, by chance, there are other attributes in the OLTP Order tables that don’t break down logically into dimensions in the data warehouse, and these attributes are associated with a specific order or the details of an order, then create a real dimension that contains the order number, the order detail number, these attributes, and a surrogate dimension key. In that case, the dimension is no longer degenerate; it's just another set of foreign keys in the fact table.