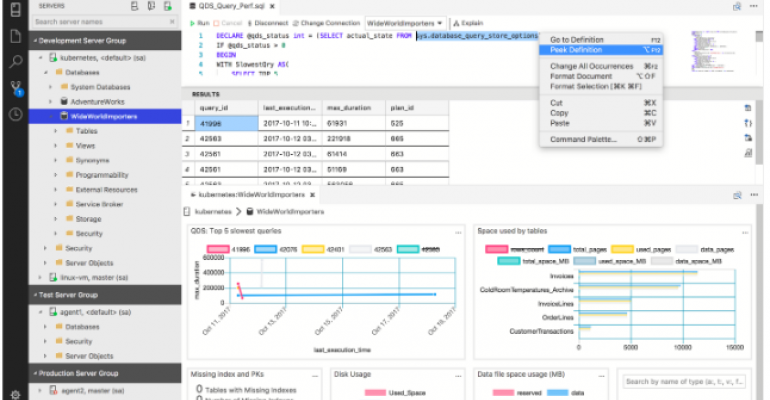 Microsoft seems to be closing the gap between Azure Data Studio and SQL Server Management Studio, making the former a viable alternative for developers and DBAs alike.

I first introduced you to Azure Data Studio when the public preview for it was announced in December 2017. At the time, the name of the product was SQL Operations Studio, and its feature set was small and aimed squarely at the developer persona. It hadn't been long since the release of Microsoft SQL Server 2017, which ushered in an entire new audience and market for SQL Server due to the scale-out of availability to Linux after nearly 25 years of exclusivity to the Windows ecosystem. The push to Linux was ambitious, and it was critical for Microsoft to provide a gateway for the audience that didn’t frequently interact with Microsoft products--particularly Windows. SQL Operations Studio developed from that need.

Azure Data Studio continues to be a cross-platform solution that comes in three flavors: Windows, Linux and Mac OS. The platform's features have evolved rapidly, and the plan is for it to be eventually on par with the established-yet-aging SQL Server Management Studio.

Based on this combination of features, one can draw the conclusion that Microsoft is now shifting toward closing the gap between Azure Data Studio and SQL Server Management Studio, making it a viable alternative for developers and DBAs alike. But the company has a long road in front of it. Currently, backup and restore functionality exists in Azure Data Studio as one of the sole DBA-focused features, which means SQL Server Management Studio (SSMS) is by far still the de-facto tool for SQL Server database administration (along with the Azure data portal for all Azure-based SQL experience administration). That does not mean that DBAs will not find interesting uses for Azure Data Studio, but for now the environment is ripe for use by those developing solutions for the Microsoft Data Platform, versus those administering instances of SQL Server on premises or administering one of the many Microsoft Azure offerings.

Getting Started with Azure Data Studio

Azure Data Studio has a very low learning curve. Here's what you need to know to get started.

1. Download and install the tool for the environment that suits your needs. (Windows, MacOS and Linux downloads are all facilitated from the same link, provided here.)

2. Connect to the instance of your choice. The process is quite similar for either Azure or on-prem environment connectivity, but there are some differences to note that may lead to frustration in connecting to Azure implementations:

For either cloud or “earthed” installs, enter the appropriate values for the following fields:

In the case of an Azure connection, you’ll need to supply the server name in a fully-qualified format: <server_name>.database.windows.net. If this is the first time you’ve established a connection to the Azure instance, you’ll also need to configure firewall rules that will allow you access or you’ll need to work with an authorized individual in your organization who can configure the firewall settings appropriately for your situation. Azure Data Studio will provide you with the recommended IP address or address range to aid in the creation of the firewall rule. Firewall settings are accessed from the Azure Portal, not from within Azure Data Studio.

At this point, you’re connected. Based on your permissions, you can create, configure and develop solutions using SQL Server on premises or on one of the many Azure-based offerings: Azure SQL Database, Azure IAAS, Azure SQL Managed Instance, Azure SQL Data Warehouse, and SQL Server 2019 Big Data Clusters and Azure Data Studio Notebooks.

Stay engaged with IT Pro Today as we offer new, tips, tricks and training around Azure Data Studio and all the new offerings coming from Microsoft as it continues to evolve and scale its SQL and Azure offerings.

Why the Windows Subsystem for Linux Matters to You – Even if You Don’t Use it
Sep 21, 2017