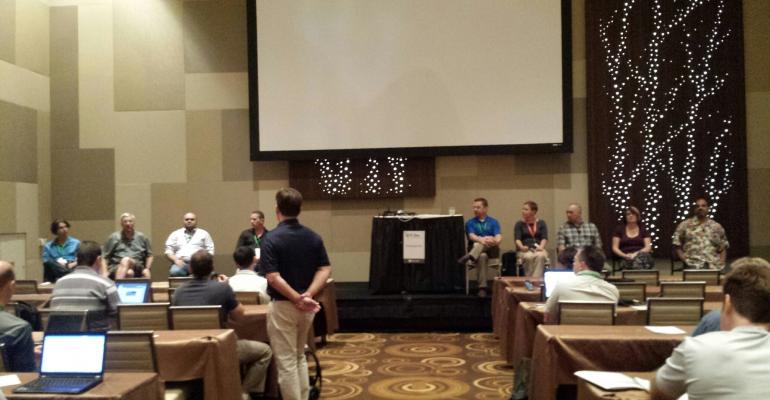 2014 IT/Dev Connections: The Week in Review

This year’s IT/Dev Connections was a different sort of event for me. First, it was held at the Aria Resort which was an entirely better experience then past venues. Notably the WiFi worked pretty darn good—perhaps not perfectly, but way better than the hotels we’ve used in the past.  Plus, the hotel was new and everything worked and was nice—a good change from older hotels like the MGM or Mandalay Bay. Those were big changes, but an even bigger change was that instead of presenting a bunch of technical sessions, I spent the majority of my time talking with the attendees. I came away with a lot of interesting information that I thought I might be interesting to you.

Related: 10 Things I Learned at a Tech Conference in Las Vegas

First and foremost, everyone I talked to was very happy with this conference. A standout may be the number of what I’ll call MMS refugees that came to the event. Many of the attendees came for the System Center coverage that was so notably absent from this past year’s TechEd and the former Microsoft Management Summit (MMS) conference. IT/Dev Connections is now the premier event for technical hands-on System Center information.

Azure and the Cloud

Azure and the cloud were another interesting point. Everyone pretty much was aware that the cloud is growing and while some are using it, others said they never will. Interestingly, and perhaps understandably, the attendees were very focused on Azure and not at all on what other cloud providers might offer. I think this was primarily due to the fact that most IT/Dev Connections attendees are strong users of the Microsoft stack. Amazon had almost no traction for the vast majority of people I talked to. Even so, Azure wasn’t what you would call a shoe-in.

There were two main areas where people were using Azure—and no it wasn’t for the IaaS functions or the hybrid disaster recovery (DR) capabilities like you might think. Instead, they were using Azure first for hosting external websites and for SharePoint. Generally speaking, SMBs are more accepting of Azure and the cloud than enterprise are. Although attendees from Enterprise level organizations had better knowledge of Azure capabilities, they were less inclined to use Azure. For them cost, security, latency, and compliance were huge concerns. Maybe two out of every 10 people were using Office 365.

As a wrap up to the event, Sean Deuby, Amy Eisenberg, Jayleen Heft, and I joined Alan Sugano on a tour his private cloud data center facility in the Super Nap location in Las Vegas. These data center facilities far exceed any private center that I have ever visited. Physical security was amply evident in the armed guards and row of assault rifles in the reception center.

Inside the facility resembled the insides of something from Star Wars. There were multiple massive facilities all full of every type of computing equipment imaginable. The site with filled with blue lights, highly secure mantraps separated each facilities, and an advanced cooling system separated the hot and cool air. Alan speculated that if this site went out, an eighth of the Internet worldwide would go down—it’s that big.

Ability to Crossover Between Technical Tracks

One of the big bonuses that the attendees really like in the the IT/Dev Connections conference was the ability to freely crossover between tracks and learn about all of the topics that interested them. It was great meeting all the people there, and hopefully, we’ll get a chance to meet you at next year’s conference.

SQL Server Sessions at IT/Dev Connections: Meet and Learn From the Experts
Aug 04, 2014