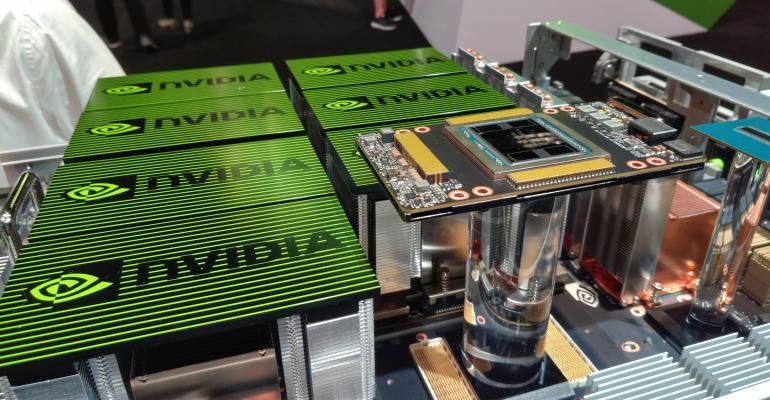 There hasn’t been a standard way to virtualize accelerators, but there soon will be.

After revolutionizing the data center industry with server virtualization and later doing the same with storage and the network, VMware is now tackling hardware accelerators, a category of data center hardware that’s been seeing a lot of market growth, driven by the rise of data analytics and Artificial Intelligence.

Last week the company announced plans to acquire Bitfusion, a startup that makes virtualization software for accelerated computing. It’s an architecture that speeds up performance by offloading processing to accelerator chips, such as GPUs, FPGAs, or custom co-processors, such as Google’s TPU ASICs.

With the acquisition, VMware isn’t simply expanding the list of crucial pieces of data center infrastructure it can virtualize – although it is doing that, and the deal looks like a natural strategic fit – it’s using its virtualization market dominance to take the first step in what may be a major transformation in the way companies use hardware accelerators in their data centers.

“This reminds me of what VMware did with VSAN and NSX,” IDC analyst Ashish Nadkarni said in reference to VMware’s storage virtualization and software-defined networking technologies. “Slowly, they are building capabilities that make vSphere just indispensable in the data center.”

Businesses are increasingly relying on accelerated computing, but there hasn’t been a standard way for VMware’s customers to virtualize that piece of the hardware stack. The Bitfusion deal paves the way for VMware to give them that standardization, both on-premises and in the cloud, according to analysts.

“It’s a great strategy for VMware,” Nadkarni, group VP for infrastructure systems, platforms, and technologies at IDC, told us. “If you look at accelerated computing and virtualization, the overlap between them has been very limited, because there was no standard way to do it. VMware has market dominance, so it was only a matter of time that the company would make a move into this space. This will completely change the game for virtualized accelerated computing.”

Today, enterprises typically use accelerators in bare-metal environments, which has resulted in poor utilization and inefficient use of the processors, Krish Prasad, senior VP and general manager of VMware’s cloud platform business unit, wrote in a blog post.

Bitfusion’s GPU-focused technology will enable customers to virtualize their GPUs and share their processing power across multiple virtual servers, which according to him will result in cost savings.

“The platform can share GPUs in a virtualized infrastructure as a pool of network-accessible resources rather than isolated resources per server,” Prasad wrote.

When the acquisition closes, VMware will integrate Bitfusion technology into vSphere, its flagship data center virtualization platform. The platform can be extended to support other accelerator chips, such as FGPAs and ASICs, the post said.

In a non-virtualized GPU situation, a single developer can keep all GPU resources occupied, while not using their whole power all the time, unnecessarily starving her colleagues of resources, Patrick Moorhead, president and principal analyst at Moor Insights & Strategy, explained.

“Bitfusion enables the virtualization and management of those GPUs for a more managed approach versus a free for all,” he said.