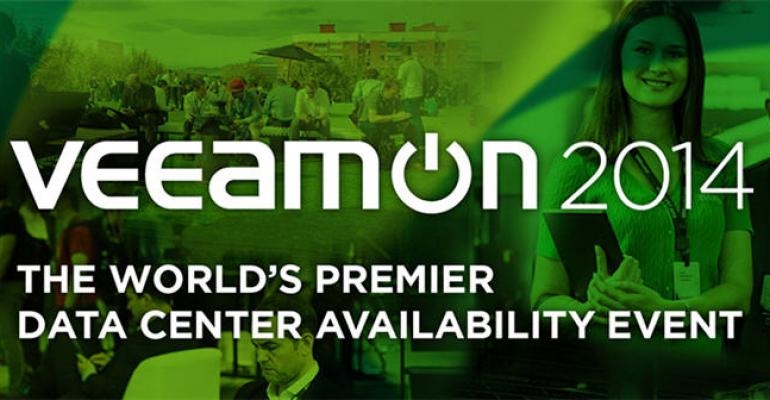 Veeam On 2014: The Enterprise Availability Conference

With almost a thousand attendees, the first ever VeeamOn 2014 conference kicked off in the Cosmopolitan Hotel in Las Vegas. Best known for the Veeam Backup and Replication product, Veeam is preparing to launch their Veeam Availability Suite v8. Today’s keynote began with Veeam’s CEO Ratmir Timashev talking about Veeam’s history and how Veeam grew out of a small office to where they now have 1,500 employees, offices in 50 countries and over 120,000 customers. Veeam’s customer base is growing at the rate of about 4,000 new customers a month. Ratmir talked about IT's dramatic changes over the past few years. Now IT has become strategic because businesses need 24x7 availability. It’s up to IT to deliver that availability using virtualization, the cloud, and storage.

Ratmir said that Veeam’s success came by following three rules: Be at the right place, at the right time, with the right product that solves a customer’s problem. Ratmir shared that his success was guided by the advice his parents gave him: “The sky's the limit. Don’t be afraid." He also shared that one of the people he admires the most was Steve Jobs, who taught us to break the limits in your heads and to think differently.

Doug Hazelman, Veeam’s Vice President of Product Strategy, then came on to show how Veeam’s new Availability Suite addresses the availability and business continuity needs of businesses today. IT needs to provision services and devices faster, they need to strengthen security and control, as well as lower operational costs. Doug pointed out that data is growing at unprecedented rates and, while businesses have updated their production technologies, data protection often lags behind. During his speech, Doug said that it’s common to see backup failure rates of up to 60 percent, and most organizations can’t even test their backup because it’s too difficult and takes too long. Doug and Jason Buffington from Enterprise Strategy Group shared some research, showing how Veeam’s customers meet their recovery time and point objectives (RTPO) 96 percent of the time with RTPOs of less than 15 minutes and that 83 percent of Veeam customers were more confident of their backups. Finally, Doug brought on a number of speakers, ranging from customers to partner companies, that were using Veeam to meet their availability needs. Some of the notable customer companies included Norwegian Cruise Lines, Fortescue Metals Group, Lafayette 148, and Trend Micro. Partners included were VMware, Microsoft, HP, and Cisco.