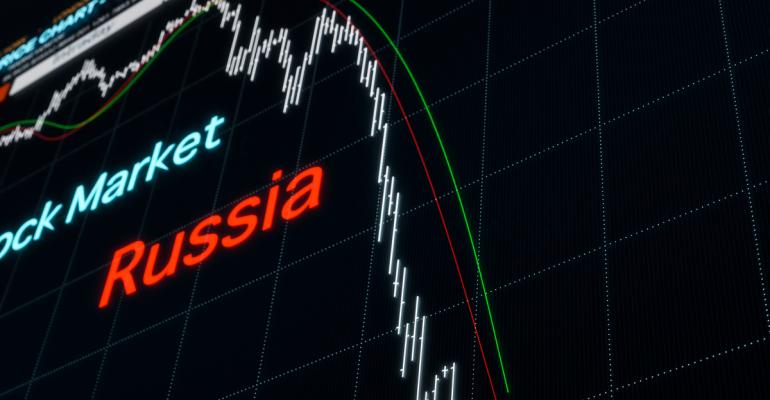 Tech Walls Off Russia Like Never Before, Posing New Risks for U.S.

Many of the biggest U.S. companies have effectively established a tech boycott of the nation. The idea is that depriving Russians of access to tech and digital platforms will spur popular protest and undermine Putin’s military campaign.

(Bloomberg) — The campaign to starve Russia of technology — stripping the nation of everything from iPhones and Airbnb listings to defense electronics — is an unprecedented experiment that risks pushing Vladimir Putin further into China’s orbit.

Using export controls as a tool, the U.S. is leading an effort to deprive Russia of components it needs for high-end industry and advanced weapons, with the hopes of ensuring that President Putin feels the pain of his decision to invade Ukraine. That has forced makers of computers, chips and sensors to halt shipments to Russia.

Related: Cyberattacks in Ukraine Soon Could Spill Over to Other Countries

At the same time, many of the biggest U.S. companies have gone further, effectively establishing a tech boycott of the nation. The idea, encouraged by Ukrainian leaders, is that depriving Russians of access to tech and digital platforms will spur popular protest and undermine Putin’s military campaign.

But no one has attempted modern technological isolation on this scale before, and it’s hard to say how Russia’s 145 million people will ultimately respond. Cutting Russians adrift from online services may undermine pro-democracy activists seeking to organize antiwar protests. And, perhaps most crucially, it threatens to drive Russia closer to America’s rivals, most notably China.

“It’s hard to think of a historic parallel,” said Peter Singer, a U.S. military strategist and author whose technothrillers have depicted combat in the absence of communication and the weaponization of social media.

Singer notes that the U.S. has always attempted to control an enemy’s supply chain. That includes Washington’s efforts to cut off Japanese access to raw resources such as oil, rubber and tin following that country’s 1937 invasion of China.

“What’s different today in the digital era is you’re reaching into the components — the chips and other pieces of it,” he said.

Restricting online services brings a dilemma. It further carves up the internet and threatens to make censorship and disinformation worse.

A senior Biden administration official acknowledged the experimental nature of the tech broadside. No one knows how the export-control move will “play out in terms of the details,” the official told Bloomberg News. But the economic separation espoused by both the U.S. government and tech companies feels like “exactly what is needed,” the official said.

The administration has said that its ban — together with efforts by allies — will cut off more than half of Russia’s high-tech imports. And the move will keep $50 billion worth of U.S. items out of the country over three years.

The policy bears similarities to the U.S. effort to punish Chinese telecom giant Huawei Technologies Co. In 2020, as trade tensions with China flared, the Trump administration cut off Huawei’s access to critical chips the company needed for smartphone and 5G operations.

“You’re taking the Huawei rule and applying that to an entire country, an entire economy,” said Martijn Rasser, a former senior CIA officer who studies technology and national security.

The move to cut off Russia was conceived as part of a deterrent package months before the country invaded Ukraine. Don Graves, deputy U.S. commerce secretary, said export controls aren’t expected to have an immediate impact. But in the coming weeks or months, the defense, aerospace and maritime sectors “will begin to feel real pain” as Russia’s stockpile of chips and other electronics dwindle, he said in an interview.

When you cut out the chip ecosystem, Putin loses his advanced military capabilities, Graves said. Russian consumers will feel the impact too, he added, citing difficulty getting computers and spare parts.

It’s ultimately Putin’s choice “if there is some type of long-term technology impact to the Russian economy and the Russian people,” Graves said. “It’s his choice to stop the war — withdraw his troops.”

Taiwan Semiconductor Manufacturing Co., a top maker of advanced chips, has already agreed not to supply Russia with semiconductors, although China may offer other options. China is Russia’s biggest supplier of electronics, accounting for a third of its semiconductor imports and more than half of its computers and smartphones.

The Shanghai-based Semiconductor Manufacturing International Corp., or SMIC, is a key source of chips, but Washington will lean on that company to cut off supply as well.

In any case, China’s chip industry is smaller and less sophisticated than that of the U.S. or other countries like South Korea.

“China alone can’t supply Russia with all of its critical needs,” Graves said. But the U.S. “will follow back up with our enforcement teams” to encourage China to adopt export controls.

While the moves could ultimately set Russian tech back by decades, the country is still expected to fare better than North Korea, which is more isolated but has nevertheless set about building hypersonic missiles under extreme sanctions.

“Companies are being very careful — they don’t want to be the poster child for having done something wrong,” said F. Amanda DeBusk, a trade lawyer who formerly ran export enforcement at the U.S. Commerce Department.

Cook had initially responded to Russia’s invasion by tweeting that he was “deeply concerned with the situation in Ukraine.” He didn’t mention Russia by name, drawing criticism that he wasn’t responding forcefully enough.

Days later, Apple halted all product sales in Russia — despite exemptions available for U.S. phones — and pledged support for humanitarian efforts. But the company stopped short of closing its App Store in the country, drawing another rebuke from Fedorov. In a memo to staff, Cook said the company was still evaluating the situation and that it was “united in our commitment to each other, to our users, and to being a force for good in the world.”

Fedorov’s campaign of social media “callouts” has targeted several other tech titans, including Amazon.com Inc., Hitachi Ltd., Intel Corp. and Microsoft Corp., demanding an end to all product support in Russia. “People’s lives depend on your choice,” he wrote to Hitachi.

For those who believe in the messianic power of technology to fix the future, the public pressure has come as a test. Tech companies’ instinct is to keep information flowing and services operating, even during a crisis. The experience of Apple serves as an example of the perils of its response to — and role in — the war.

It’s also not much of a courageous choice to pull out of Russia now because it’s become a very difficult place to operate. Between the financial sanctions, currency fluctuations and general turmoil, it’s hard for businesses to get paid for products and services anyway.

And Russia is a much smaller market than, say, China. If the entire U.S. tech industry were to pull the plug on Russia, the move would have only a revenue impact of 1% to 2% “in a worst-case scenario,” according to Wedbush Securities.

But even if the financial stakes are low, companies still have to struggle with the effect of isolating the Russian people. Cutting off social media and other online services could create a digital fortress around Russia, helping fulfill a goal of Putin’s government.

“For years, the Kremlin has sought to erect its own digital borders over the internet,” said Allie Funk at Freedom House, which advocates for an open internet.

But service providers have already begun to reduce internet and wide-area network traffic into Russia, potentially cutting off employees from information and additional aid, according to Krebs Stamos Group, a U.S. cybersecurity company.

“People should think hard about unintended consequences,” McSherry said. Closing down credit card and other payment processing services — as Visa Inc., Mastercard Inc., American Express Co. and PayPal Holdings Inc. have done — also risks depriving Russians of access to virtual private networks and other encryption services that are critical for their safety, she said.

Ukraine has called for Russia to be cut off from the internet altogether. ICANN, a Californian nonprofit that supports internet infrastructure, refused Kyiv’s request this month to shut down Russian domain names and effectively bring the Russian internet to a halt. The group cited both the technical impossibility of doing so and the global importance of unimpeded internet access.

Dmitri Alperovitch, a cybersecurity expert, said the software boycott may have a limited effect since Russia can find ways to pirate key programs.

As for hardware, Russia will likely continue turning inward there too. Just as the Soviet Union made everything from cassette players to space rockets, the country will have to rebuild its domestic production — speeding up a process Russia started after the U.S. and EU imposed sanctions in 2014 following its annexation of Crimea.

Russia does have some manufacturing capacity to replace imported chips, said Samuel Bendett, a researcher at the U.S. security think tank CNA. “It’s just not going to be quite as good qualitywise.”

China also may be wary about filling Russia’s needs for another reason. If Beijing sells chips to Moscow for use in weaponry such as fighter jets, they might feasibly be passed on to India, China’s competitor, said James Lewis, technology strategist at the Center for Strategic & International Studies.

Ultimately, though, China may be the biggest hurdle to cutting Russia out of the world’s tech economy, said Singer, the military strategist.

“We’re not going to see a complete tech isolation of Russia,” Singer said. “They have this massive strategic partner that’s sitting on the sideline waiting to make all these gains.”