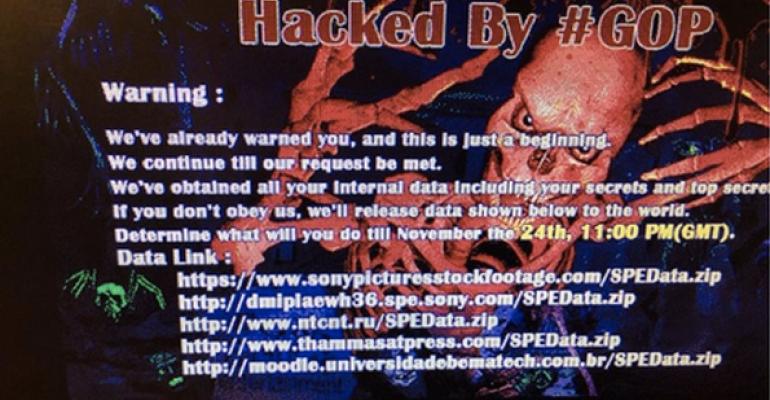 North Korea May Have Hacked Sony

A new low, and not just for James Franco

Already reeling from a major hack that saw its web site defaced and its internal networks breached, Sony received some more bad news: The source of the attack may have been the government of North Korea, which is incensed about a coming Sony movie that parodies its leader, Kim Jong Un.

"The FBI is working with our interagency partners to investigate the recently reported cyber intrusion at Sony Pictures Entertainment," an agency statement explains. "The targeting of public and private sector computer networks remains a significant threat, and the FBI will continue to identify, pursue, and defeat individuals and groups who pose a threat in cyberspace."

Investigators from the Federal Bureau of Investigations, the Department of Homeland Security, Sony, and security firm FireEye have determined that the Sony hack closely resembles the methods used in North Korea cyber-attacks on South Korean television stations and ATMs last year. And they've discovered that the attackers left a malware payload that could spread beyond Sony's PCs, rendering the hard drives of infected PCs virtually unrecoverable.

Not surprisingly, this is all James Franco's fault. The actor stars in a comedy film called "The Interview" which parodies Kim Jong Un and involves a plot to assassinate the North Korean leader. When news of the film was first broadcast earlier this year, North Korea publicly described it as "the most undisguised terrorism and a war action," and threatened a "strong and merciless countermeasure" if the US government "patronized the film."

It's not clear that the US government ever "patronized" the film, but "The Interview" is opening up nationwide on Christmas Day. It's rated R for "pervasive language, crude and sexual humor, nudity, some drug use and bloody violence."

The Sony attacks started Monday, forcing Sony to take its systems offline for days as PCs around the company displayed an ominous "hacked by #GOP"—where GOP stands for "Guardians of Peace"—message and threatened to reveal Sony's "internal data" and "secrets" unless some unclear request be fulfilled.

Whatever the hackers wanted, it didn't happen, and internal Sony data—including senior executive salaries and several full-length Sony movies, including some that have not yet been released—was subsequently leaked to the web. 17 of those executives make over $1 million per year before bonuses, the documents reveal.

Meanwhile, the FBI has sent a five-page "flash" warning to the security departments at large US-based businesses detailing the malware that was unleashed on Sony and providing advice on how to respond. (The memo doesn't specifically identify Sony, but it's very clear that's the company in question.) "The overwriting of the data files will make it extremely difficult and costly, if not impossible, to recover the data using standard forensic methods," the report notes.

And while Sony isn't exactly back to business as usual, the entertainment firm says that it has restored "a number of important services" and is "working closely with law enforcement officials to investigate the matter."