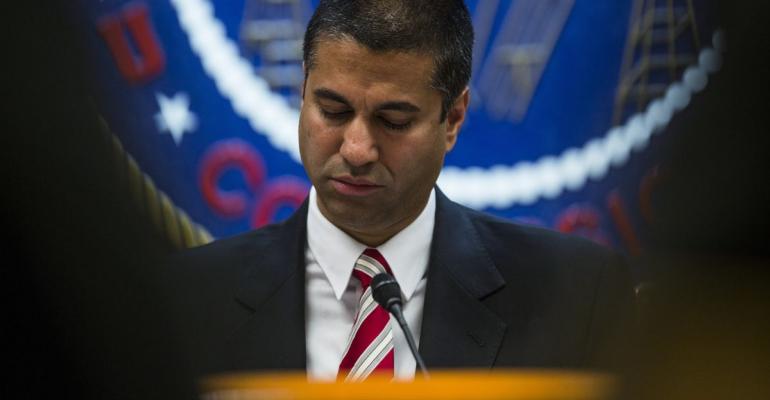 (Bloomberg) --The U.S. Federal Communications Commission swept aside rules barring broadband providers from favoring the internet traffic of websites willing to pay for speedier service, sending the future of net neutrality on to a likely court challenge.

The Republican-led commission voted 3-to-2 on Thursday to remove Obama-era prohibitions on blocking web traffic, slowing it or demanding payment for faster passage via their networks. Over objections from its Democrats, the FCC gave up most authority over broadband providers such as AT&T Inc. and Comcast Corp. and handed enforcement to other agencies. The changes won’t take place for at least two months.

“It is time for us to restore internet freedom,” said FCC Chairman Ajit Pai, who was chosen by President Donald Trump to lead the agency, and who dissented when the FCC adopted the rules under Democratic leadership in 2015. “We are restoring the light-touch framework that has governed the internet for most of its existence.”

The change frees broadband providers to begin charging websites for smooth passage over their networks. Critics said that threatens to pose barriers for smaller companies and startups, which can’t afford fees that established web companies may pay to broadband providers, or won’t have the heft to brush aside demands for payment. Broadband providers said they have no plans for anti-competitive “fast lanes,” since consumers demand unfettered web access.

The FCC’s vote concludes a tumultuous eight-month passage since Pai, proposed gutting the earlier rules. The agency took in nearly 24 million comments, but many of those appeared to be of dubious origin including almost half a million routed through Russia. Dozens of Democratic lawmakers expressed opposition, while Republicans lauded Pai’s plan.

The FCC’s action will “return the internet to a consumer-driven marketplace free of innovation-stifling regulations,” Senate Majority Leader Mitch McConnell, a Kentucky Republican, said in remarks prepared before the agency’s vote.

Democratic Senator Amy Klobuchar, of Minnesota, said the FCC with its vote “will put internet service providers, not consumers, in charge of determining the future of the internet.”

Pai argued that the Obama-era rules brought needless government intrusion to a thriving sector, and discouraged investment in broadband. Supporters said investment has flowed unhindered, and that rules are needed to keep internet service providers from unfairly exploiting their position as gateways to homes and businesses.

The FCC with its 2015 rules claimed powers that could include regulating rates charged by internet service providers. The agency said it wouldn’t immediately do so, but the prospect helped propel broadband providers’ opposition.

Web companies such as Alphabet Inc.’s Google, Facebook Inc. and Amazon.com Inc. wanted to keep the previous regulations. “Having clear, legally sustainable rules in place finally established rules of the road and provided legal certainty,” the Internet Association, a trade group for web companies, said in comments to the FCC. “The commission should maintain its existing net neutrality rules and must not weaken their firm legal basis.”

With its vote the FCC rescinded its 2015 decision to treat internet service providers using a portion of the laws designed to regulate utilities. Much of the debate over net neutrality has revolved around this question of classification: whether Washington regulators can wield the kind of intrusive rulemaking that’s also used, for instance, to tell telephone providers when and where they can stop offering service.

The FCC also abandoned the bulk of its oversight role, saying antitrust authorities and the Federal Trade Commission can monitor for anti-competitive practices. Critics say those agencies don’t have expertise and act only after abuses occur, rather than setting rules that guide behavior.

In addition, the authority of the FTC is under question in a case before federal judges in California, where AT&T is contesting a sanction from the FTC for deceiving smartphone consumers who paid for unlimited data only to have their download speeds cut.

Opponents of Pai’s rules are expected to ask U.S. judges to overturn the ruling and restore the old rules. Issues before the judges will include whether the FCC has adequate grounds to reverse a decision taken less than three years earlier. Judges last year upheld the previous rules.

Congress could write a law to overrule the FCC’s action, but it hasn’t acted as Democrats dismiss Republican invitations to legislate to a permanently weaken the 2015 rules. The Democrats’ “wall of resistance” may weaken in the new year after partisan fervor heightened by Thursday’s vote has a chance to abate, Cowen & Co. analyst Paul Gallant said in a Nov. 21 note. A bill might restore some basic net neutrality protections and also bar the FCC from regulating rates, Gallant said.

The new rules are to take effect 60 days after being published in the Federal Register that chronicles regulatory activity, the FCC said in its draft order for Thursday’s vote.