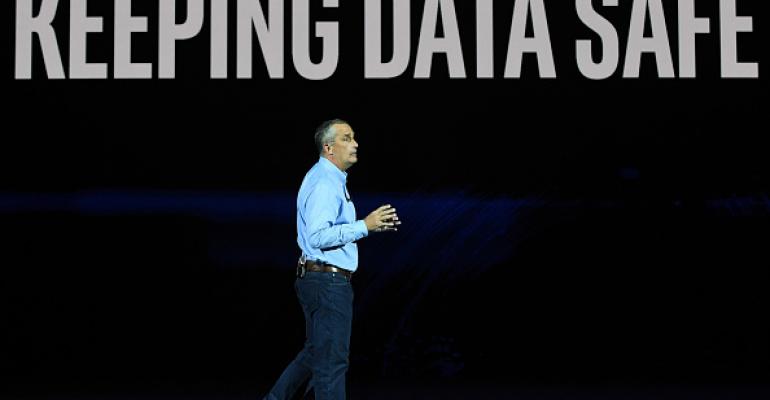 Ian King (Bloomberg) -- Intel Corp., whose microprocessors dominate the personal-computer market, gave an upbeat quarterly and annual sales forecast, signaling optimism that demand will persist even as the industry scrambles to fix a vulnerability in its PC and server chips.

Sales in the current period will be about $15 billion, plus or minus $500 million, and annual revenue will rise to a record $65 billion, the company said in a statement late Thursday. That compares with average quarterly estimates for revenue of $15 billion and 2018 projections for sales of $63.9 billion.

Chief Executive Officer Brian Krzanich is grappling with the fallout from the disclosure early this month of a security flaw that could let hackers use processors to illicitly access sensitive information on servers and PCs. That’s raised new questions about how reliant computer makers are on Intel’s products, which account for more than 90 percent of the microprocessor market, and has given new urgency to Krzanich’s push to ease Intel’s dependence on the PC market for its own growth. For now, the vulnerability may be helping Intel as computer owners retire older systems and upgrade to secure their systems.

“PCs have held up quite well in the fourth quarter and the first quarter is going to be OK,” said Ruben Roy, an analyst at MKM Partners. “The data-center business is going to re-accelerate in 2018 and that’s been a focus for investors."

Intel shares gained 4.5 percent in extended trading following the announcement, after closing the day in New York at $45.30. The stock gained 27 percent in 2017, lagging behind the 38 percent advance in the Philadelphia Stock Exchange Semiconductor Index.

In the fourth quarter, sales climbed 4.3 percent to $17.1 billion, Intel said. The company posted a net loss of 15 cents a share because of an income tax expense of $5.4 billion, a result of the new U.S. tax law passed last month. Excluding certain items, profit was $1.08 a share. On that basis, analysts had projected 87 cents in profit, on revenue of $16.4 billion.

Intel Chief Financial Officer Bob Swan said the boost in Intel’s sales and profit in the recent quarter came from a return to spending by corporations on their internal networks. That trend may not continue, he said. Sales to cloud-service providers -- companies such as Alphabet Inc.’s Google and Facebook Inc. -- rose 35 percent in the fourth quarter.

“We see good demand trends” in the first quarter, Swan said in an interview. “The biggest pleasant surprise was enterprise.”

After it announced the chip vulnerability Jan. 3, Intel told investors there would be no material impact on earnings. The company initially said it wasn’t liable because the chips were not faulty -- they work as promised -- noting that the potential exploit affects all modern processors, not just Intel products. The company has since then accepted more responsibility. Intel apologized and has submitted regular updates on the efforts to roll out software patches that close off the hole hackers might have used. While there have been no reports of data being stolen via this method, some of the patches have caused computers to repeatedly reboot or slow down, particularly older machines.

The disclosure of the issue, which Intel had known about since summer, has also raised questions about Krzanich’s fourth-quarter sale of a chunk of company stock. Intel says the sales were part of a pre-arranged plan with an automated schedule, but some securities lawyers say the larger-than-usual transaction will probably be examined by the U.S. Securities and Exchange Commission. Lawmakers have also called for an investigation.

Intel’s PC chip unit had fourth-quarter sales of $9 billion, down 2 percent from a year earlier. In PCs, Santa Clara, California-based Intel is facing a revived challenge from longtime rival Advanced Micro Devices Inc. The data-center unit, which sells powerful, expensive chips for machines that run the internet and corporate networks, had revenue of $5.6 billion, a jump of 20 percent. Intel’s CEO has promised growth in that unit of more than 10 percent long term, though gains in recent quarters had fallen short of that target. In the third quarter, data-center division sales rose just 7 percent.

Sales of memory chips rose 9 percent, while revenue from chips for a new range of devices that are gaining the ability to compute and connect, known as the internet of things, climbed 21 percent.

Intel’s renewed commitment to memory chips takes it into direct competition with Samsung Electronics Co., the only company in the industry with comparable sales and resources.

The memory market, which Intel invented when the company was founded in the late 1960s, then exited in the early 1990s when competition from Asian companies became too great, is typically the most volatile part of the industry. In some years, producers lose money when supply gluts cause prices to drop.

Intel’s latest venture into the market has struggled to turn a profit. It’s also possibly not pulled in enough sales to prevent Samsung from breaking its more than 25-year run as the largest overall chipmaker.

Shipments of personal computers totaled 259.5 million units in 2017, according to researcher IDC. That represented a drop of 0.2 percent, the smallest retreat since the market began to shrink in 2011. The market was "steadying, albeit still weak” in the fourth quarter, gaining less than 1 percent from a year earlier, IDC said earlier this month.