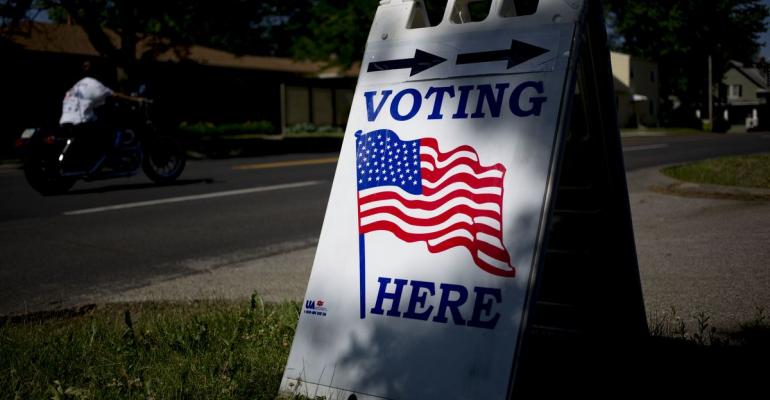 A "Voting Here" sign is displayed outside at a polling location in Davenport, Iowa, U.S., on Tuesday, June 5, 2018. Photographer: Daniel Acker/Bloomberg
Security

DNC Backtracks on Cyber-Attack Claim, Says It Was Only a `Test'

The Democratic National Committee now believes its database of voters was the target of a third-party test of its cybersecurity and not a cyber-attack, according to party officials.

(Bloomberg) --The Democratic National Committee now believes its database of voters was the target of a third-party test of its cybersecurity and not a cyber-attack, according to party officials.

Security firm LookOut Inc. notified the DNC on Tuesday that it had found a fake login page for VoteBuilder, which is used by national and state Democratic groups as well as the party’s candidates. A party official initially said the site had been created in a phishing attack aimed at collecting usernames and passwords to the Democrats’ massive cache of voter information.

“We, along with the partners who reported the site, now believe it was built by a third party as part of a simulated phishing test on VoteBuilder,” Bob Lord, the chief security officer who was previously Yahoo’s chief information security officer, said in a statement late Wednesday.

Lord didn’t identify the third party but said that the test mimicked several attributes of actual attacks and was not authorized by the DNC, VoteBuilder nor any of their vendors.

“The party took the necessary precautions to ensure that sensitive data critical to candidates and state parties across the country was not compromised,” Lord said in the statement. “There are constant attempts to hack the DNC and our Democratic infrastructure, and while we are extremely relieved that this wasn’t an attempted intrusion by a foreign adversary, this incident is further proof that we need to continue to be vigilant in light of potential attacks.”

The incident comes as the DNC is working to strengthen its cyber defenses after being the target of hacks during the last presidential campaign. Breaches of the DNC’s network in 2015 and 2016 led to the release of embarrassing emails about the party’s primary process. Chairwoman Debbie Wasserman Schultz was forced to resign on the eve of the party’s convention. In July of this year, Special Counsel Robert Mueller charged 12 members of Russia’s military intelligence agency with the attack.

President Donald Trump has dismissed as a “witch hunt” Mueller’s continuing investigation into Russian interference and whether anyone close to Trump colluded in it. At times, he has blamed the Democrats for having weak defenses against cyber-attacks compared to the Republicans.

Security measures that could have mitigated the DNC hack
Feb 13, 2017