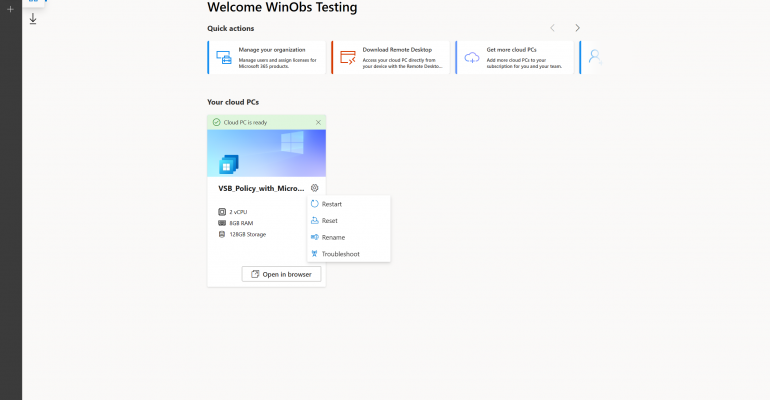 Hands On With Windows 365 Cloud PC

The launch of Microsoft’s Windows 365 Cloud PC service enables organizations of any size to provide their remote workers with secure access to work-related apps and data on nearly any device through a modern web browser or a remote desktop app.

Earlier this month, Microsoft made their cloud PC service, Windows 365, available to customers. The service provides a fully secured, managed, and configured desktop for any employee as an alternative to physical hardware that must be shipped to the user.

Utilizing any modern browser or remote desktop app, users gain access to a fully functional installation of Windows 10 Enterprise that is secured with their company credentials. All apps and data are hosted on the remote desktop, which keeps that data in company storage for proper access controls, data loss prevention, and security. The subscriptions for Windows 365 Cloud PC are stand alone and separate from Microsoft 365 subscriptions.

Enthusiasm has been high for the service since its debut on August 2nd – so high, in fact, that all of the capacity that had been earmarked for Windows 365 trials was exceeded within just a couple of days. The option is still available to directly subscribe to the service and start paying to use Windows 365 desktops immediately. If the preference is to wait for a trial to check things out, there is an option to sign up for a notification once trial access resumes.

Before diving into the Windows 365 Cloud PC hands on, let’s talk about pricing, which was not available when the service was announced in July.

There are two subscription tiers, Business and Enterprise, but the pricing is the same for each and the Windows 365 Cloud PC configurations offered are the same in each tier. The key differences are user limits, endpoint management options, and licensing options.

A Windows Hybrid benefit, a $4 discount per month/per device, applies if Windows 365 is being accessed on a device that is already licensed for Windows 10 Pro. Organizations deploying Windows 365 to their users on Windows 10 Enterprise devices automatically get the discounted subscription rate for using those devices for the service.

Windows 365 for Business can be purchased directly from Microsoft at the Windows 365 web portal and all devices are managed via the Windows 365 admin portal. No additional licenses are required to begin using the service.

Windows 365 for Enterprise devices can also be purchased from the Windows 365 web portal or directly from the tenant’s account representative at Microsoft. These devices can be provisioned and managed from Microsoft Endpoint Manager. They utilize existing Microsoft licenses for Windows 10 Enterprise, Microsoft Endpoint Manager, and Azure Active Directory (P1). These licenses can be obtained independently but are also available in other Microsoft 365 subscription options such as Microsoft 365 F3, E3, E5, A3, A5, Business Premium, and Microsoft 365 Education Student Use Benefits.

Windows 365 for Business is limited to 300 users or fewer for any organization while Windows 365 for Enterprise supports an unlimited number of users.

Note: According to Microsoft, outbound data includes saving files from a Cloud PC to an external location and data transfers outside of Microsoft cloud services. Exceeding these limits could result in Microsoft restricting bandwidth and outbound data volume on a case-by-case basis to ensure quality of service for all users.

Setting Up and Using Windows 365 for Business

This hands on is focused on Windows 365 for Business and utilizes the mid-range device configuration that is labelled Standard by Microsoft. This configuration consists of 2 vCPU’s, 8 GB of RAM and 128 GB of storage and costs $45 per month/per user without the Windows Hybrid licensing benefit. 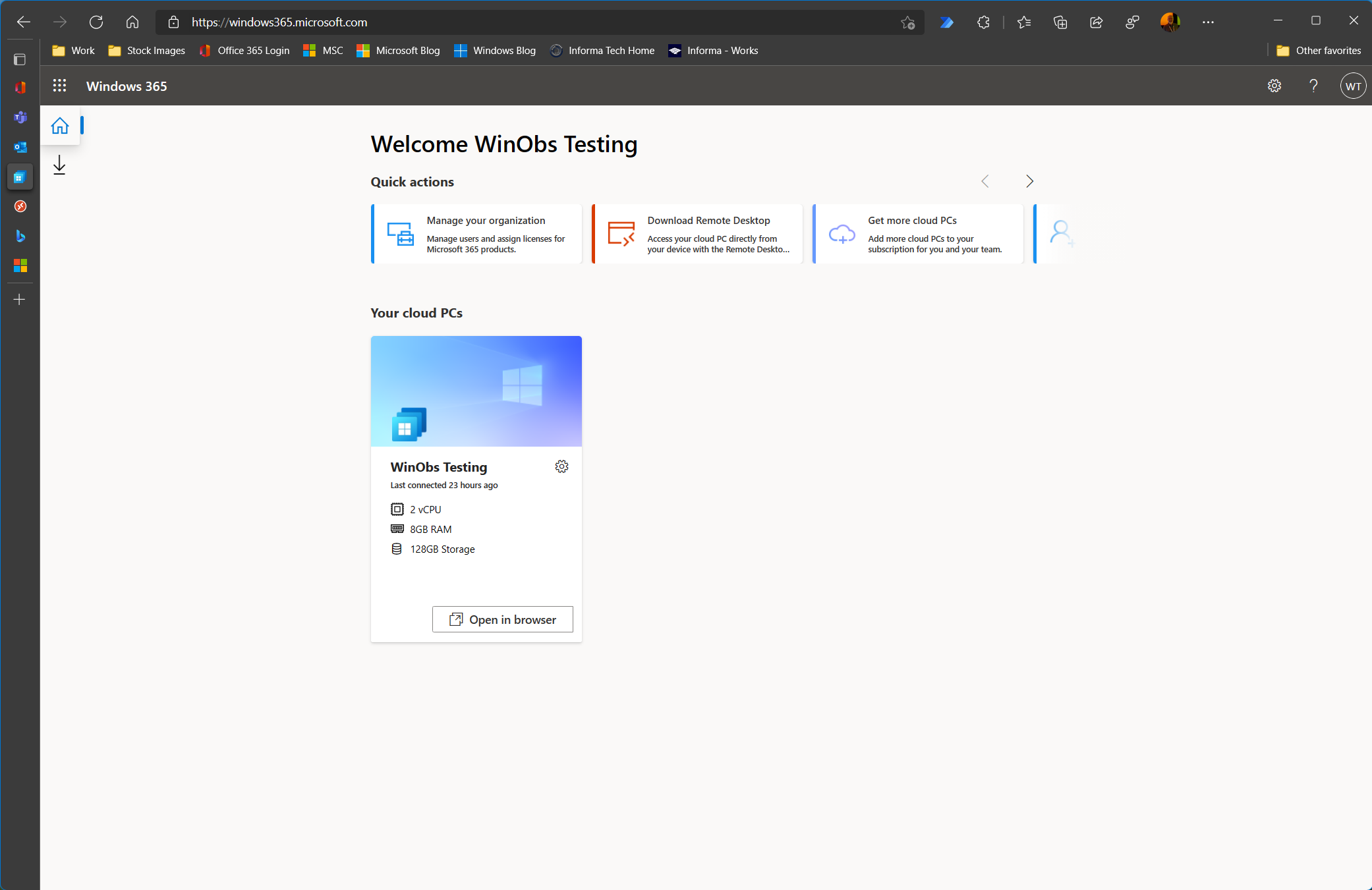 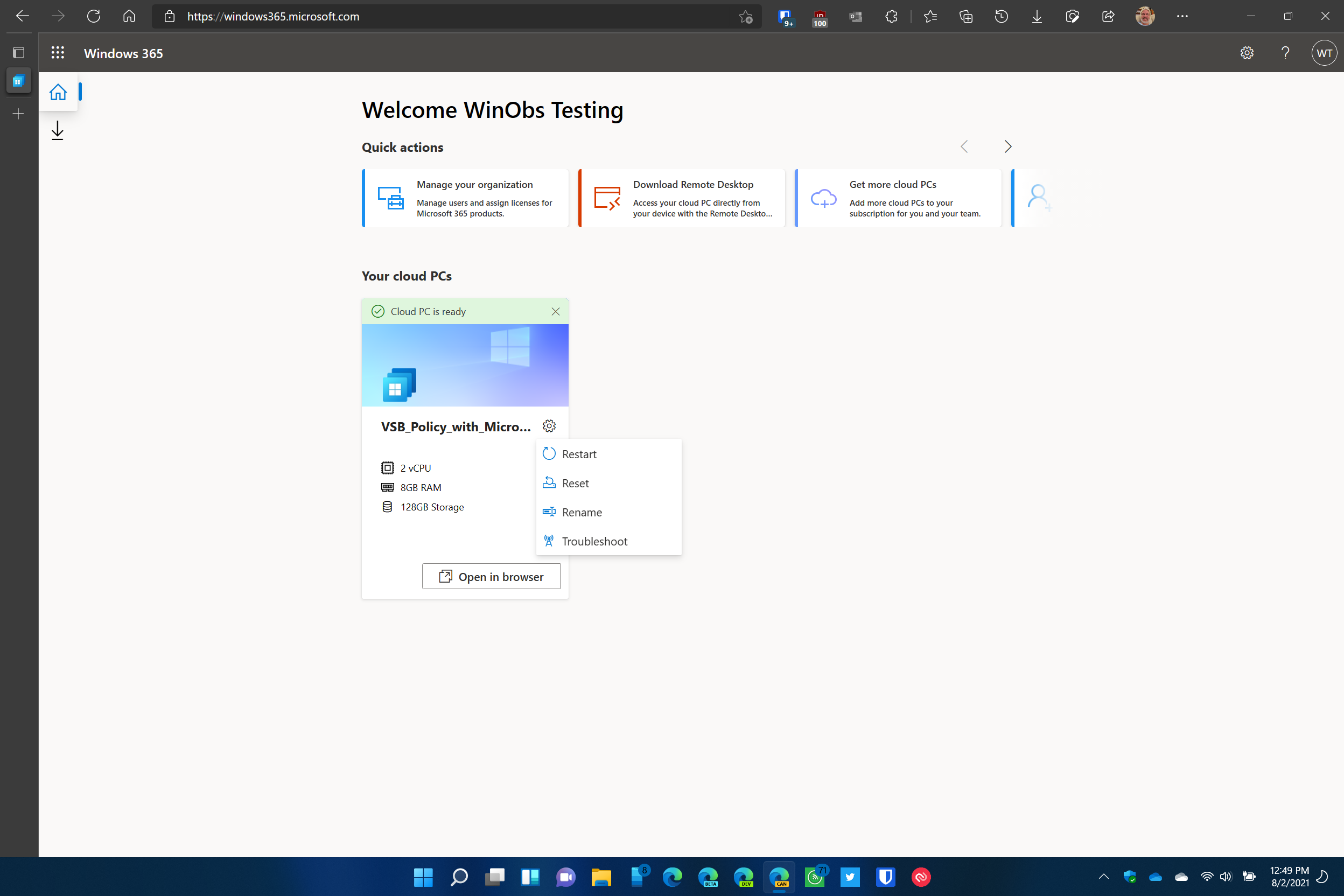 Windows 365 for Business users have access to settings in the portal that allow them to restart, reset, rename, or troubleshoot their Cloud PC.

Once the user is ready to access the Cloud PC, they just need to click on the Open in browser button to get started.

They will be prompted for the same credentials used to access the Windows 365 for Business web portal and will then be logged into the Cloud PC.

Note: If the user wants to enable access to some local hardware and network resources, they must make those selections on the following dialog: 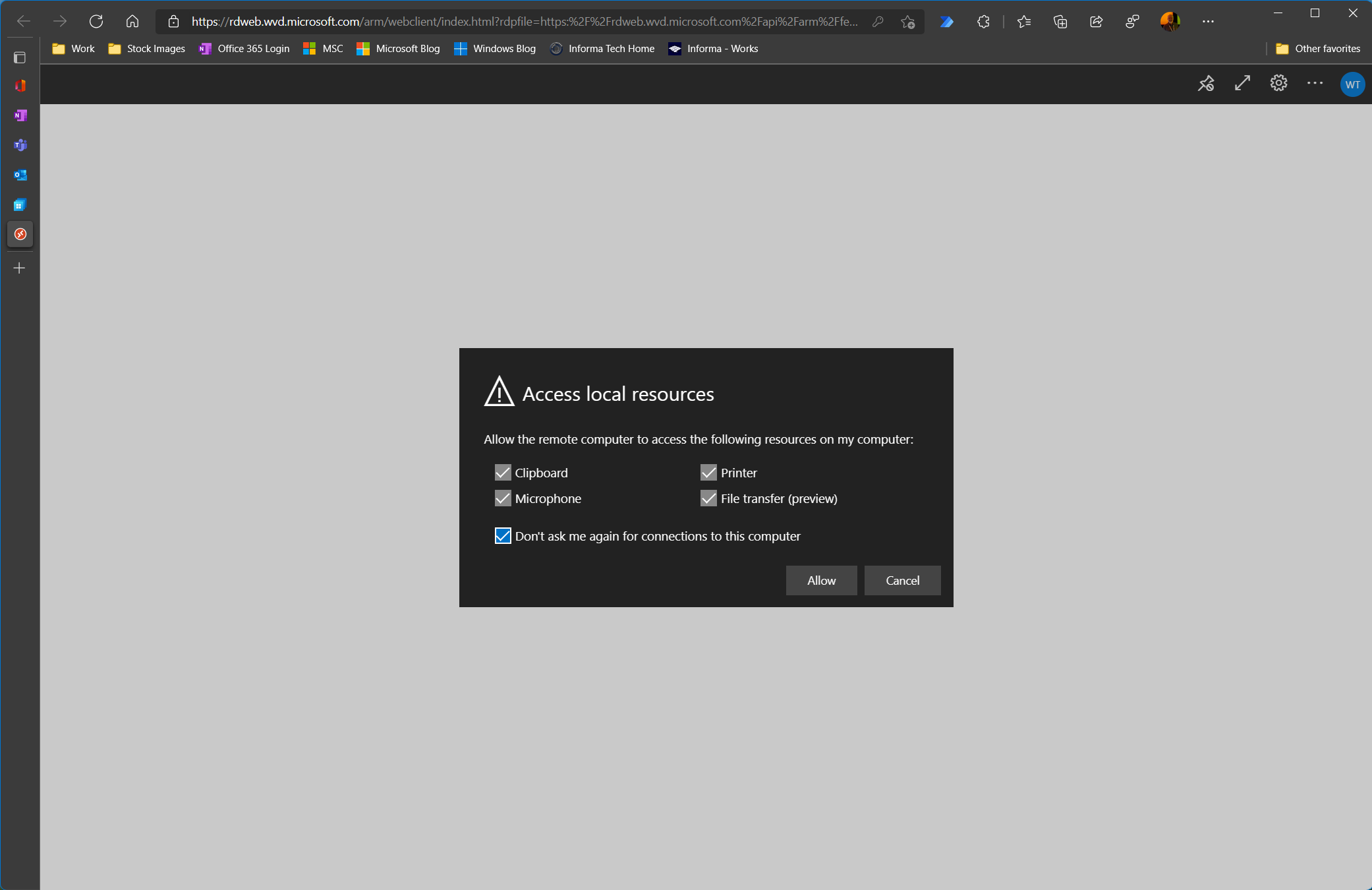 These are all handy options for utilizing the Cloud PC on a personal device. The File transfer (preview) option is not selected by default but is recommended if files may need to be moved back and forth between the local system and the Windows 365 Cloud PC. 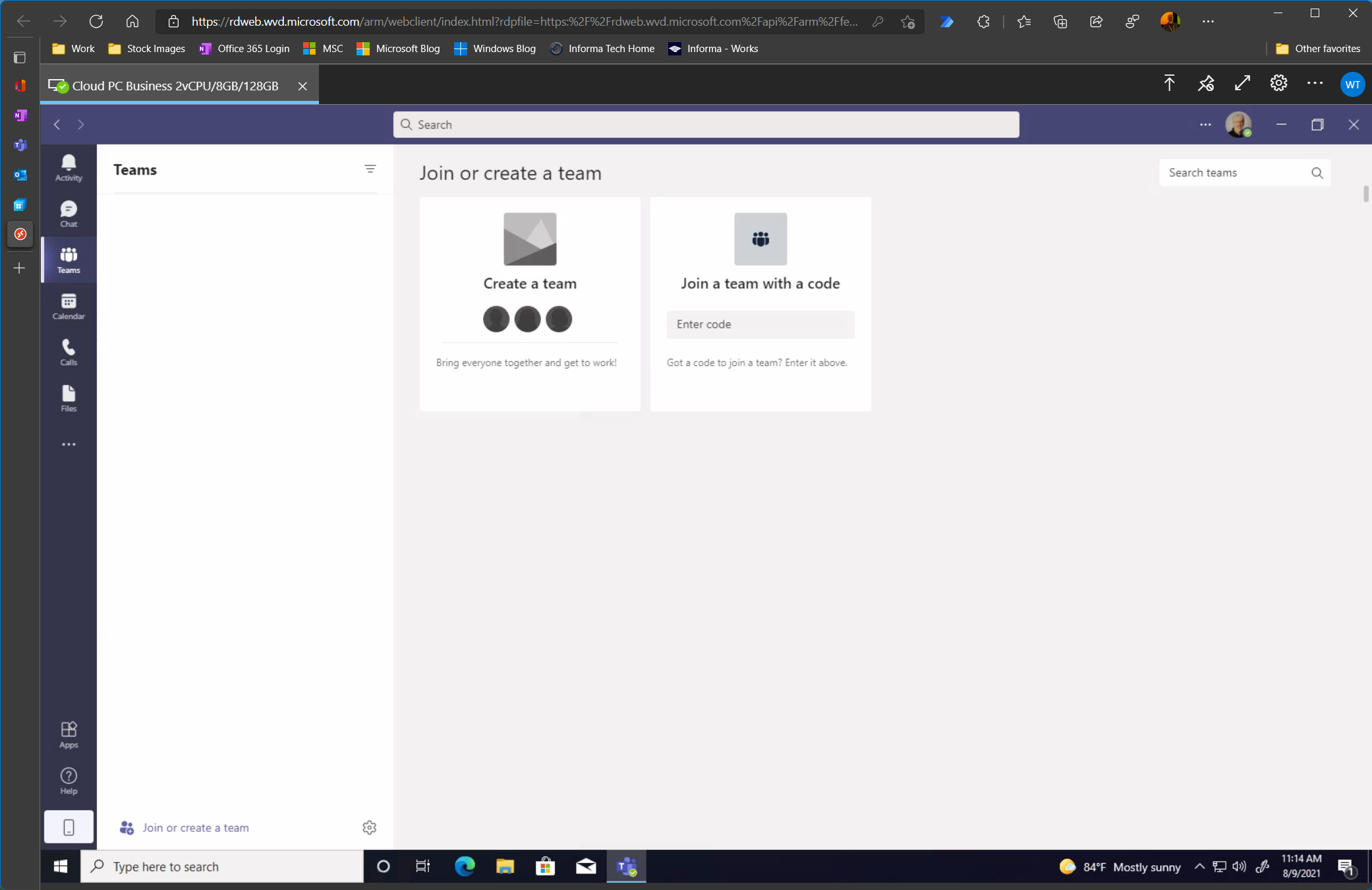 Microsoft Teams in a Windows 365 for Business Cloud PC

Microsoft Teams is automatically installed the first time the Cloud PC is accessed. The users who are assigned Teams will show up in the app and local audio and video hardware can be used to participate in Teams calls.

Microsoft OneDrive for Business will also be automatically provisioned on the Cloud PC, providing access immediate access to the user’s files stored in the cloud.

If the user is also licensed to use Office 365 apps such as Outlook, Word, Excel, and PowerPoint, they will also be able to use those apps under their user credentials. The full desktop versions are already installed on the Cloud PC. 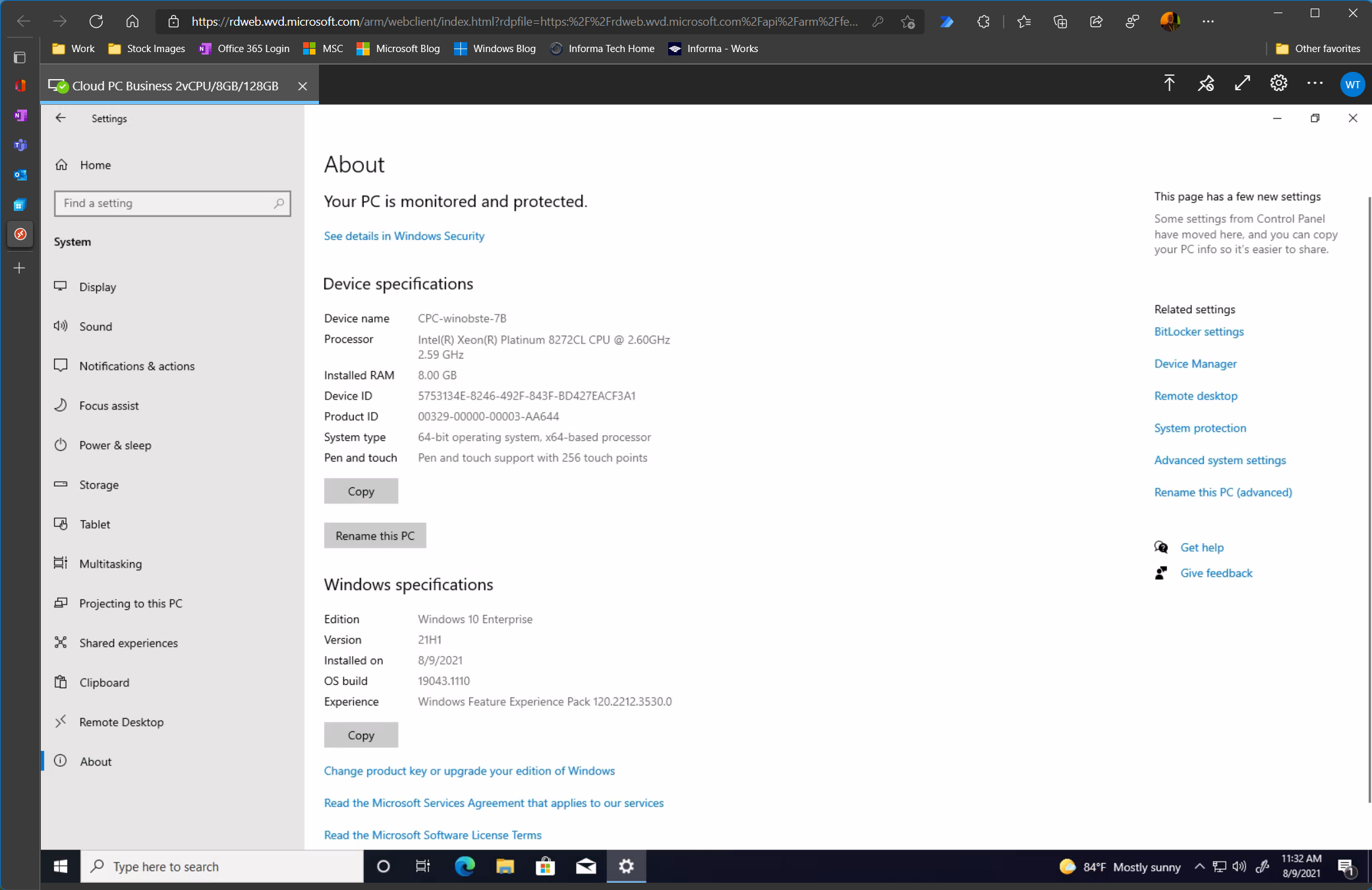 At this point the Windows 365 for Business Cloud PC is like any other desktop device running Windows 10, with the exception that access is happening through the web browser. Users will find a configurable Start Menu, the Microsoft Edge web browser, and the familiar desktop. 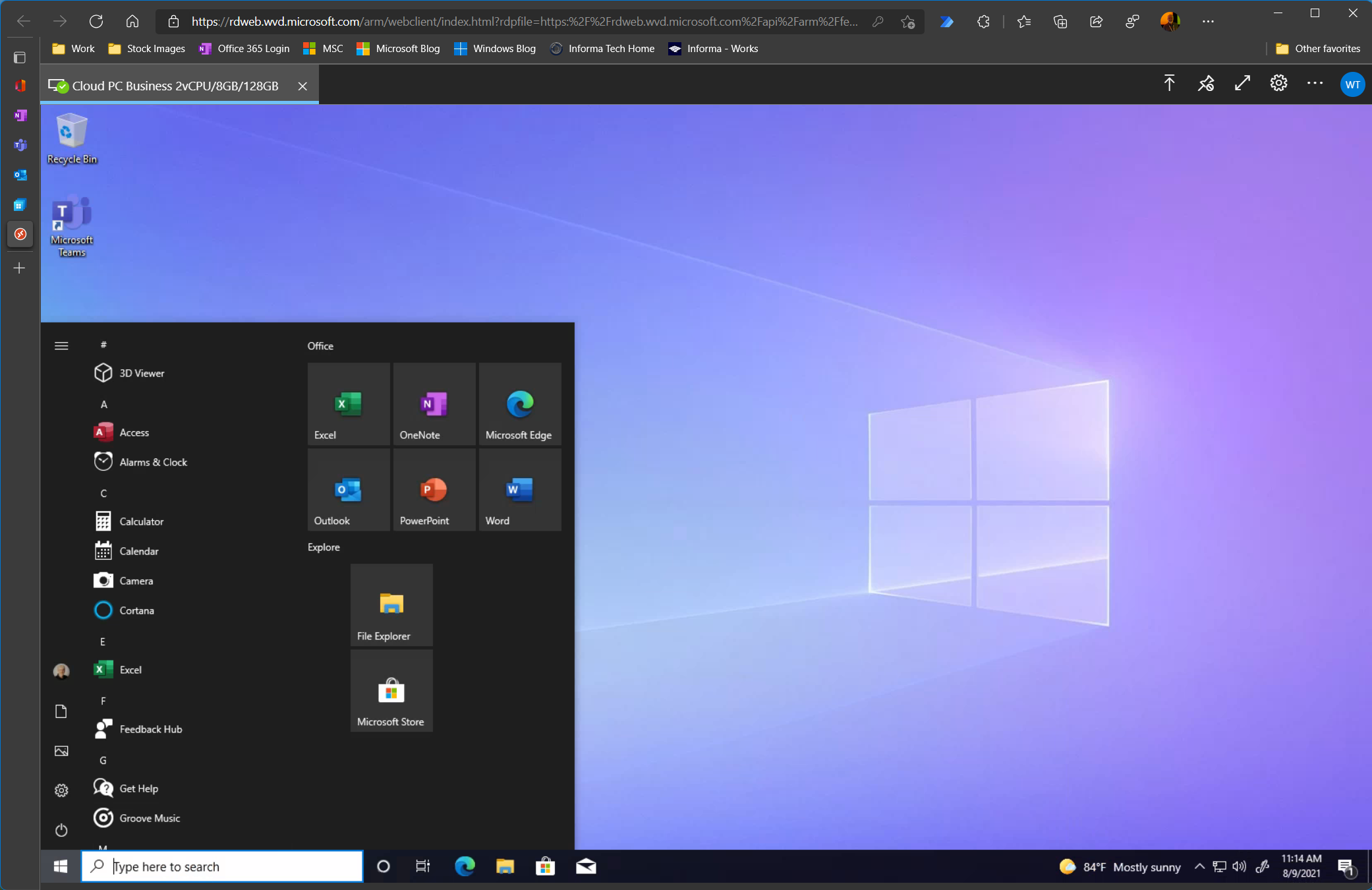 Since the device is always on in the cloud, if a user is disconnected during a session or accidentally closes their browser window, the state of the Windows 365 Cloud PC will be exactly where it was at that time when it is next accessed. This means no inadvertent loss of any work in progress, no matter the circumstance.

Maintenance and update of the device will be handled automatically without any user intervention necessary.

Accessing and using a Windows 365 Cloud PC is no different than browsing to a website and then finding a familiar Windows 10 interface ready for use on a physical device. This mid-range standard configuration has run very well in the cloud and allows efficient use of the various Microsoft Office apps. However, anecdotal data from readers on social media indicate that devices with 2 vCPU’s and 4 GB of RAM and lower, including the device with 1 vCPU with 2 GB of RAM, may be a little more sluggish.

The other aspect of this service that could be an issue is the cost associated with each device. The configuration I tested, considered mid-range and labelled as standard by Microsoft, costs $45 per month. That extrapolates out to a yearly cost of $540 for that single device. As the configurations get bumped up, that cost increases quickly.

When it comes to cost, organizations and businesses will have to do detailed cost analysis to identify the value Windows 365 Cloud PC can provide. There are a lot of benefits to this setup because a small IT staff does not have to worry about maintaining updates on these devices since that is all handled by Microsoft on the backend. Provisioning is quick on a per user basis and setup is streamlined as the user logs into the device for the first time – all of their resources such as cloud file storage, email, productivity and collaboration apps, and secure desktop access are ready and waiting when they log in.

In addition, the Windows 365 Cloud PC can be accessed from any modern browser that utilizes the HTML 5 web standards.

As I worked with Windows 365 Cloud PC through this hands-on process, I got a sense that the real value in this service will be those short-term access requirements for contractors or temporary employees. Rather than provisioning and providing/shipping out a physical hardware device, a Windows 365 Cloud PC can be quickly configured providing those users immediate access on a temporary basis with full security, data control, and company access through their own device.

This is even more useful because Windows 365 Cloud PC subscriptions are monthly and can be cancelled at any time. This works perfectly for when a temporary employee or contractors work is done, and the Cloud PC is no longer needed. Quick to get started and quick to turn off.