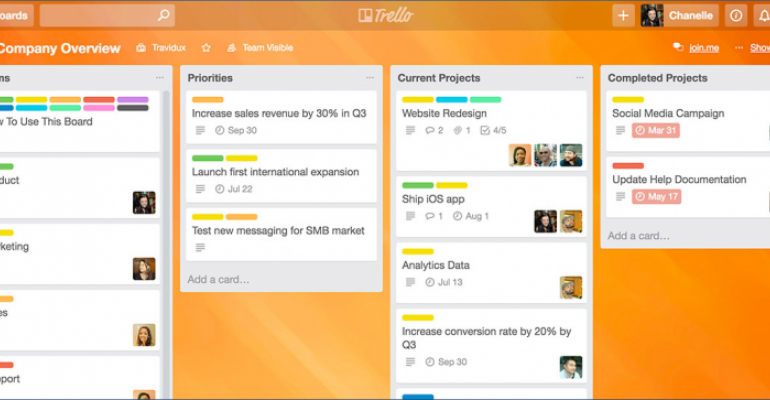 The purchase price consists of $360 million in cash and the rest in restricted stock and options, said Atlassian President Jay Simons in an interview. The deal may increase earnings, excluding some costs, in Atlassian's fiscal 2018 year. It's expected to close this quarter, subject to regulatory approval and certain closing conditions, Atlassian said.

Trello's app offers digital post-it notes and whiteboards to organize tasks and priorities. It has 19 million users, a number that almost doubled in the past year. The startup sells free and paid versions and the products will remain standalone offerings after the deal.

Atlassian, founded in 2002 in Sydney, began as a maker of programs that help engineers and technical workers collaborate and track projects. The company, forecast by analysts to top $600 million in sales this fiscal year, went public in 2015 and is trying to broaden its appeal to more types of workers to grow sales and fend off competition. In 2012, Atlassian purchased HipChat, a corporate messaging program that competes with Slack. Atlassian shares are up 18 percent from its $21 IPO price.

New York-based Trello was spun out of Fog Creek Software in 2014 and has about 100 employees. It's raised $10 million from backers including venture capital firms Index Ventures and Spark Capital. Chief Executive Officer Michael Pryor will join Atlassian and report to its co-CEO Mike Cannon-Brookes.

Trello's software is more structured and formal than Atlassian's Confluence product, but less so than Jira. That makes it a good addition to fill out the product lineup, Simons said, noting that some customers use all three for different things. For example, he said a marketing team would use Trello to brainstorm priorities for a campaign, Confluence to create and revise a specific piece of marketing content and Jira to manage a really specific plan for the campaign's web development.

How to Get the Most out of Basecamp Templates to Speed Project Startup
Oct 29, 2019