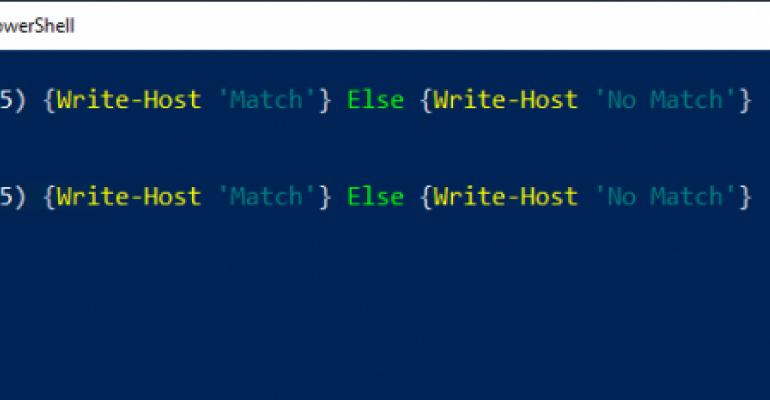 Create If Else Statements in PowerShell

Here's how to use If Else statements in PowerShell. Read on for instructions and examples.

If Statements in PowerShell

For the sake of demonstration, here is an example of an If statement. I am going to create a variable called $A and set its value to 5. I will then create an If statement that checks to see if $A is equal to 5. If $A is indeed equal to 5, I will have PowerShell display the words “it’s a match.” Here is the code:

The first line of code creates a variable called $A and sets its value to 5. The second line of code is the If statement. It starts with the word “if,” followed by a condition in parenthesis. In this case, the code is checking to see if the variable is equal to 5 ($A -eq 5). Assuming $A is equal to 5, which it should be, PowerShell performs the specified action and displays text saying, “its a match.” You can see what this looks like in Figure 1. (Note: The apostrophe in “it’s a match” is omitted because it would break the script.)

Related: How To Use a For Each Loop in PowerShell

Figure 1. This is what an If statement looks like in PowerShell.

So, what would happen if the $A variable were set to something other than 5? In Figure 2, you can see that I set $A equal to 6 and then performed the same If statement as before. This time nothing happens because the condition ($A -eq 5) is not being satisfied, which means that the action (displaying “its a match”) is never performed.

If Else in PowerShell

The first half of an If Else statement is identical to what was already demonstrated. It starts with the word “if” and is followed by a condition that appears inside parenthesis and an action that appears between brackets. The Else portion of the command is appended to the If command, just after the action. The Else portion of the command does not need a condition (because a condition is already being evaluated by the If statement), but it does need an action. As with the If statement, the action is enclosed in brackets.

See how this code works in Figure 3.

Figure 3. This is how an If Else statement works in PowerShell.

Although I have kept things simple, note that real-world use cases of If Else statements in PowerShell can be more complex. An If statement, for example, might include multiple conditions, such as the following:

In this case, I am checking the values of two variables. Because I used -And (as opposed to -Or), both conditions must be true for the action to be performed.