brought to you by
Data Center>Power and Cooling

Data centers can now earn the Energy Star label seen on TVs, refrigerators and computer monitors. The U.S. Environmental Protection Agency (EPA) has officially launched a program that allows data centers to receive an Energy Star rating based on a PUE score. 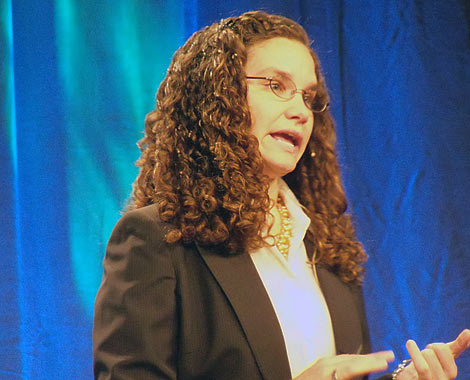 The new Energy Star for Data Centers rating is a customized version of the EPA' Energy Star for Buildings program, with some adaptations that recognize the unique power use of data centers. The EPA rating for buildings is usually based on "energy intensity" measured in watts per square foot of space, a measure in which data centers score off the scale compared to most commercial.

Based on PUE Metric
Energy Star for Data centers will instead be based on Power Usage Effectiveness (PUE), an energy efficiency metric developed for data centers by The Green Grid. After a study of data submitted by about 100 data center operators, the EPA adapted PUE ratings to the 100-point scale used in the buildings program.

"The main objective is to provide a simple, easily-communicated management tool," said Alexandra Sullivan, the Technical Development Manager of the Energy Star for Buildings program, who discussed the program Tuesday at the 7x24 Exchange spring conference in Boca Raton, Fla. "We're looking for something really simple that can provide motivation for energy savings in buildings."

Sullivan said the EPA metric would use "source energy" rather than site energy as its base measurement. For most data center operators, the two will be the same, Sullivan said. But source energy also includes non-electric energy sources, such as chilled water purchased from a local utility for cooling.  She also said that Energy Star would would work with PUE measurements taken at the output of the UPS.

Portfolio Manager is Gateway
Data centers seeking the Energy Star label must enter their facility data in the EPA's Portfolio Manager software, the backbone of the agency's Energy Star for Buildings program. Required data include gross square footage, IT energy and utility bills. Upon completion, the software will provide a rating, and submitters that score 75 out of 100 or better are then invited to apply for Energy Star status.

Before being awarded the Energy Star, a licensed professional must independently verify the energy performance of these buildings and sign and seal the application document that is sent to EPA for review and approval. EPA previously implemented the Energy Star for Enterprise Servers program.

The EPA estimated that improving the energy efficiency of America’s data centers by just 10 percent would save more than 6 billion kilowatt-hours each year, enough to power more than 350,000 homes and save more than $450 million annually.

In a question-and-answer session, attendees at the 7x24 conference identified several areas where aspects of the Energy Star for Data Centers implementation may raise challenges for companies wishing to participate. For example, there are no exceptions to the total energy for testing of generators or UPS, meaning that data center operators that frequently test that equipment may find it more difficult to gain Energy Star rating. The standard also doesn't offer any credit or carve-out for on-site renewable energy generation, which EPA says is a desirable goal but would be weighted equally with utility power.

The Dunk Tank Reconsidered: How OCP May Yet Immerse Your Servers
May 27, 2020

Sponsored Content
Digital Remote Monitoring and How it Changes Data Center Operations and Maintenance
May 01, 2020