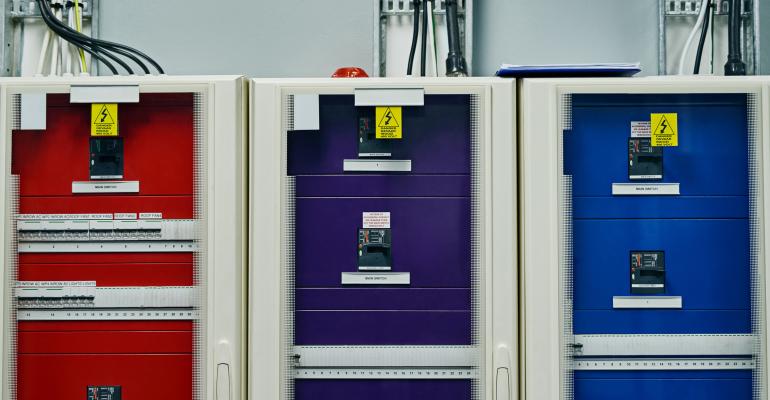 The company claims its technology is better and cheaper to own, and big customers are listening.

Nearly every month it seems, a news headline screams out about a new “breakthrough” battery technology, many of those inventions focused on electric cars. Natron Energy has an invention in the battery category, but unlike most others, the Silicon Valley startup is aiming at the data center UPS market. It’s already brought a product to market and started making inroads into major data center operators.

Based in Santa Clara, the eight-year-old company has developed sodium-ion batteries it says can discharge a lot of energy in a short period of time. Natron executives claim its batteries produce two to five times higher peak power than market-dominating lead-acid batteries and market-insurgent lithium-ion ones. Unlike the other two alternatives, they say, it doesn’t degrade, recharges quickly, and has a much longer lifespan.

“It’s a really powerful battery. The beauty is that it can discharge quickly and do a full recharge in eight minutes. In the data center world, that is unheard of,” Jack Pouchet, Natron’s VP of sales, told DCK. Until recently, Pouchet was a key business development executive at Vertiv, one of the world’s largest data center power and cooling infrastructure vendors.

Founded by a group of Stanford University scientists and engineers, Natron operated in stealth mode until launching a 1U-sized battery last year. Initially, it’s targeting two markets: data center UPS and power backup for carriers’ mobile switching offices. But it plans to enter other markets in the future.

Besides offering an alternative battery technology for tiding a data center over between the time it loses utility power and the time its backup generators launch, the startup is pitching its sodium-ion batteries for “peak shaving,” or switching to stored energy temporarily during periods of peak energy use on the utility grid. Another interesting use case is for a colocation provider to be able to give a customer more power than they typically use on a temporary basis. A retailer, for example, could require more power to process transactions or run analytics during the holiday shopping season.

Natron hopes to grab a share of the UPS battery market long dominated by lead acid batteries. Sodium-ion isn’t the only up-and-coming technology going after lead acid batteries’ market share. Another example is ZincFive’s nickel-zinc technology, as well as lithium-ion. The latter has had an early market lead, Lucas Beran, a principal analyst at Omdia, told us.

Lithium-ion UPS batteries are gaining traction in the data center market, particularly among hyperscalers and colocation providers, because they handle more charge-discharge cycles and last longer than lead acid batteries, lowering the total cost of ownership. They are also denser, taking up less data center space. Lithium-ion battery sales reached 5 to 10 percent of the roughly $2 billion to $2.5 billion three-phase UPS battery market in 2018 and 2019, Beran said.

Because of a few isolated incidents – exploding tablets, hoverboards, and what not – lithium-ion batteries have a reputation of being unsafe. But the lithium-ion chemistry used in UPS products today (lithium-ion phosphate) is stable and safe, Beran said.

“The data center market is conservative and has used lead acid for a long time, because everyone knows how it works,” Beran said. “But we are getting to the point where they want to turn their on-site energy footprint into a revenue-generating asset rather than an idle asset that sits there for emergency use cases.”

Rhonda Ascierto, VP of research at the Uptime Institute, said she had heard from several “very large” data center operators that they were interested in Natron. “They are looking at its technology very closely,” she said, “so there is an opportunity for Natron to make an impact and rival lithium-ion, but the company needs to prove itself.”

Natron executives plan to do just that and believe their technology can fully replace lead acid and lithium-ion batteries in data center UPS systems.

The startup’s CEO Colin Wessels co-founded it with two advisors as a spin-out from his Ph.D. thesis at Stanford. In eight years, the company has grown to more than 50 employees and has raised $38 million through three rounds of funding, including investment by Chevron Technology Ventures, Fluxus Ventures, and Prelude Ventures.

The company expects to close another round of venture capital funding in March, which will help ramp up production of its 1U battery and bring its next-generation battery to market this year, Pouchet told us.

Natron’s patented battery technology uses the Prussian Blue pigment to effectively store and release energy in the form of sodium ions. Both electrodes of its battery use the pigment, which is typically used for blueprints, in paint, and even in medicine, to remove certain radioactive materials.

Typically, a battery either has good power density or good energy density – not both. Lithium-ion batteries, for example, are energy dense, meaning they can hold a lot of energy. But they discharge energy slowly, which works well for smartphones and electric vehicles, Pouchet said.

Natron’s sodium-ion batteries are power dense, meaning they can deliver a lot of energy, quickly. While relatively short, the bursts of power they provide last long enough for a data center UPS setup to run the facility during a utility outage until its generators take over, according to Pouchet. The 1U battery, for example, can discharge 4kW over two minutes, he said. “It works well for one to three minutes and fine for 15 to 20 minutes.”

Prussian Blue’s unique structure and composition allows the battery to fully discharge and re-charge repeatedly without degradation, according to Natron. And unlike lithium-ion and lead acid batteries, its batteries don’t require a waiting period between charges for safety reasons, the company said.

Because the technology puts zero strain on the material, the battery last longer, enabling more than 50,000 discharge cycles, compared to less than 1,000 for lead acid, and 2,000 to 5,000 for lithium ion, he said.

By Natron’s own estimates, its technology requires 30 percent lower capital expenditure for data center UPS than lead acid and half lead acid’s total cost of ownership over five years.

While lithium-ion phosphate is safer than other lithium-ion chemistries, it requires a battery management system to make sure the batteries operate safely and don’t overheat. In contrast, Prussian Blue is non-flammable and doesn’t require such a complex management system, Pouchet said.

Finally, manufacturing lithium-ion batteries requires lithium and other rare earth metals, while Prussian Blue and other materials used in Natron’s batteries, such as sodium, magnesium, and aluminum, are abundant, he said. “We don’t use rare earth metals of any kind. It’s all commodity based. We can get materials anywhere.”

Like Natron, VPS is one of the rare startups tackling the slow-changing market for fundamental data center infrastructure technology. VPS’s novel energy-management technology has also drawn attention of some of the world’s largest data center operators. In February, VPS’s executive team got a major boost. Dean Nelson, who used to run data centers for eBay and then Uber, joined VPS as interim CEO. Peter Gross, who until late last year ran the data center business of Bloom Energy, the innovative but recently troubled fuel-cell startup, was named VPS’s chairman of the board.

“You have the ability to actively use batteries without affecting the ROI, and that is a game changer and the reason why we are engaged and excited about this product,” he said.

VPS, based in Milpitas, California, is battery-agnostic and says that different batteries are good for different use cases. For example, data centers can use lithium-ion for long outages and Natron’s sodium-ion batteries for peak shaving and optimization of power utilization, Jeria said.

About 80 percent of data center power failures last less than 10 minutes, Joel Davis, VPS’s senior VP of sales and marketing, told us. “Look at the new trends of data centers, and you see that Natron is providing a better way than the other candidates out there,” he said.

Natron currently has two customers – the unnamed colocation provider (the one shared with VPS) and a global telecommunications giant, whose name it also has not disclosed. The company currently builds all its batteries “by hand,” but it aims to increase sales and ramp up its manufacturing efforts this year. It plans to ship the 1U battery in low volumes in April and get to medium volume by the end of the year.

Once it increases production, Pouchet said, Natron’s prices will be competitive and match the prices of lead acid and lithium-ion offerings. “In the near future, we will be in cost parity,” he said.

Natron also hopes to ship its next-generation battery by year’s end: a 48U form factor that provides roughly 300kW of power in a standard IT cabinet, he said. That product will be aimed at the data center, telecommunications, and electric-vehicle fast-charging station markets with the higher-end battery.

“Our funding round in March will assist with capital equipment investment and supply chain and material investment, so we can go into full-scale production,” Pouchet said.

Ascierto, of Uptime, said that for a period of time she expects large operators to try multiple data center UPS battery technologies. It’s now up to Natron to get some good customer references and illustrate its advantages over a formidable alternative.

“Natron’s biggest challenge is to break through the lithium-ion noise, and they have to do it with actual installations and having customers who are willing to be references,” she said. “But Natron’s technology is something very large data center operators are absolutely interested in.”

Those “very large” customers are key. Natron doesn’t need 1,000 customers to succeed, VPS’s Davis said. It just needs about ten, but they must be the right ones. “They get the right ten, and they won’t be able to build enough product. Some of these big data center operators can easily consume all of what Natron makes for several … years.”