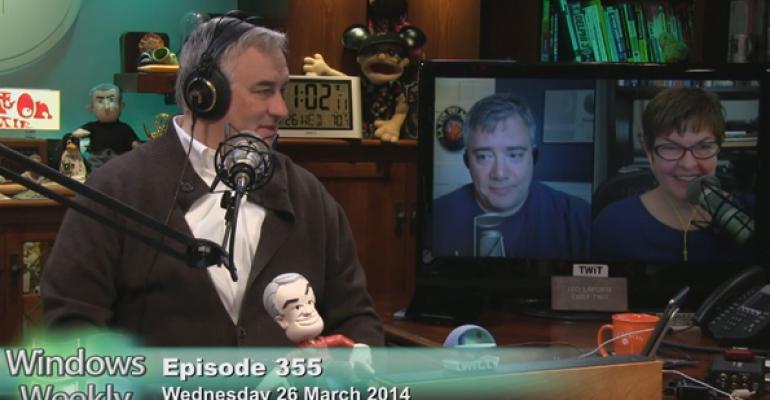 Windows Weekly 355: Take It and Run

The one where Paul's cat interjects again

In the latest episode of Windows Weekly, Leo Laporte, Mary Jo Foley and I discuss Build 2014 expectations, our live appearance next week in Petaluma, Microsoft's expected Office for iPad announcement, some Windows devices news, an Azure renaming, a Microsoft employee theft, and more.

Tip of the week: Buy my book you cheap bastards

Break out your time machine (and your dusty copy of MASM): Microsoft has released the source code for old versions of MS-DOS and Word for Windows.

A slightly more serious pick: Tweetium for Windows 8/RT - $2.99, but with MetroTwit gone it's time to start looking for something new

This is going to be a big part of tomorrow's Enterprise Mobility Suite announcement, sources say. http://msdn.microsoft.com/en-us/library/windowsazure/dn532272.aspx

Codename pick of the week: Monaco

A subset of Visual Studio that can work in any modern browser. Maybe it's moved past the preview stage and will be ready for a Build beta? http://www.zdnet.com/microsoft-debuts-its-cloud-based-complement-to-visual-studio-7000023125/

Meanwhile, how about some Klingon beer?