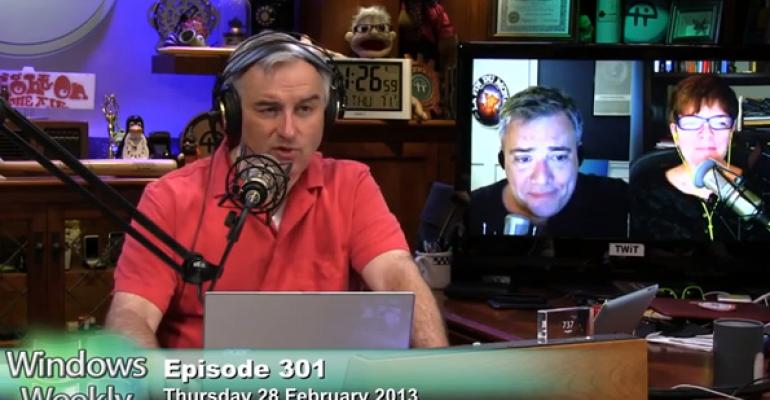 Windows Weekly 301: Designed in the Dark

The one where Mary Jo no longer looks pixelated

In the latest episode of the Windows Weekly podcast, Leo Laporte, Mary Jo Foley, and I discuss the Office 365 for businesses launch, Barnes & Noble's NOOKsplosion, Surface Pro preorders now shipping, an expansion of Surface RT and Surface Pro availability, Windows Phone news, and the availability of Internet Explorer 10 for Windows 7.

Tip of the week: Windows Phone 8 users should get the HERE apps

Microsoft's sync app for Windows Phone 8 improves with support for playlists, ringtones, video previews, and sharing with other Metro apps.

Software pick of the week: Twitter 2.0 for Windows Phone 8

A completely redesigned Twitter app gets it right on Windows Phone 8.

Enterprise pick of the week: Yammer

The enterprise social networking tech MS bought last year is starting to bubble up as an integrated part of SharePoint, Dynamics CRM and more

Codename pick of the week: Isotope

With Hortonworks announcing its own Hadoop distribution for Windows this week, what's going on with the MS/Hortonworks partnership around 'Isotope'?

(In honor of all the coffee convo we hear happens on MacBreak Weekly). One of Harpoon's 100 barrel series: http://www.harpoonbrewery.com/beer/443/100-Barrel-Series-44-El-Triunfo-Coffee-Porter

Audible pick of the week: Whitey: The Life of America's Most Notorious Mob Boss

Whitey: The Life of America's Most Notorious Mob Boss by Dick Lehr and Gerard O'Neill and narrated by John Rubinstein. The life of Boston's most famous mobster (and FBI informant) gets a detailed telling from a Boston Globe reporter and editor who covered his crimes in the 1970's and 1980's. This is big news in the Boston area now since he's in the news now leading up to his trial, and he's expected to provide a lot of info about corruption in the Boston and state police at the time.