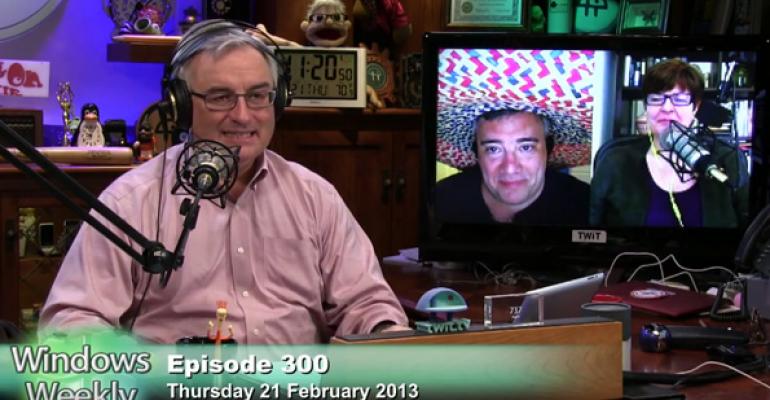 Windows Weekly 300: All Hat no Pixels

The one where Paul wears a funny hat

In the latest episode of the Windows Weekly podcast, Leo Laporte, Mary Jo Foley, and I discuss the release of Outlook.com, the latest on Windows "Blue," Surface Pro sales over the second weekend of availability, Microsoft's crazy plan to kill Messenger with Skype, a few Windows Phone quickies, and Sony's PlayStation 4 announcement.

Tip of the week: Learn how to manage and deploy Office 2013

Microsoft is starting an amazing video series called "Office Garage" that will run through at least June and provide IT pros with all the info they need to manage, deploy, and maintain Office 2013. I'll be participating in this series in a virtual roundtable in April, and what I've seen of it so far looks amazing.

Tip of the week #2: Make the switch to Outlook.com

Last summer, I wrote a series of articles helping Gmail and Hotmail users make the switch to Outlook.com. Now that the service is finally available in non-beta form, and Microsoft is moving Hotmail users to it, I've collected them in a single place, Outlook.com Tips.

Angry Birds Seasons finally arrives for Windows Phone 8! And it's only 99 cents.

Enterprise pick of the week: Lync 2013

Skype integration/federation is running later than expected for the latest version of Lync. Also: Reminder that O365 for business launch is Feb 27 and new bits and plans should be widely available starting that date

This is the codename for Xamarin 2.0, which launched this week. The "big splash" is that C# devs can now write mobile apps for iOS using Visual Studio thanks to a new plug-in.

In honor of episode 300 of Windows weekly, we all could use a little more cowbell!