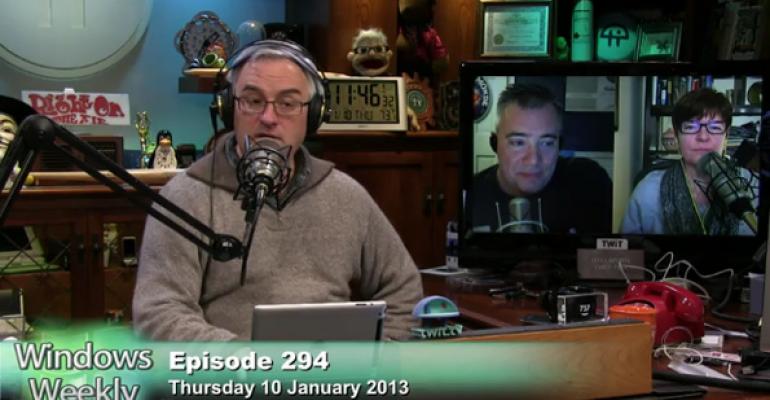 The one where Paul gets a haircut

Tip of the week: Get Zune Podcasts for Metro
Not sure why this isn't more widely communicated, but there is a mobile app for both Windows Phone and Windows 8/RT that uses the same exact back-end Zune Marketplace podcast catalog as does Zune PC software and Windows Phone 7.x. So anyone can access Microsoft's podcast library on any modern version of Windows.
PODCASTS! for Windows Phone - PODCASTS! for Windows 8/RT
Software pick of the week: MyFitnessPal for Windows Phone
My favorite calorie (food/exercise) tracker is now available for Windows Phone! MyFitnessPal works with all versions of Windows Phone, and is backed by a great online service that logs over 1.2 million foods. If you're trying to keep track of what you're eating and doing on the go, this is it. (Also available for iPhone and Android, and on the web.)
Enterprise pick of the week: Premier Field Engineering's blog and 'mix tape'
PFE has a lot of deep and good posts from which MS biz users might benefit. Their top 10 list for 2012.
Buzzword pick of the week:  Cloud OS
You're going to be hearing a lot more about MS' new favorite uber-term for WIndows Server, SQL Server and Windows Azure this year -- starting next week
Beer pick of the week: Davidson Brothers CRTL-ALT-DEL
The ultimate MS beergeek name? Perhaps!
Audible pick of the week: Iron Curtain: The Crushing of Eastern Europe, 1944-1956
UNABRIDGED by Anne Applebaum, narrated by Cassandra Campbell
In the long-awaited follow-up to her Pulitzer Prize-winning Gulag, acclaimed journalist Anne Applebaum delivers a groundbreaking history of how Communism took over Eastern Europe after World War II and transformed in frightening fashion the individuals who came under its sway.
0 comments
Hide comments
Recommended Reading