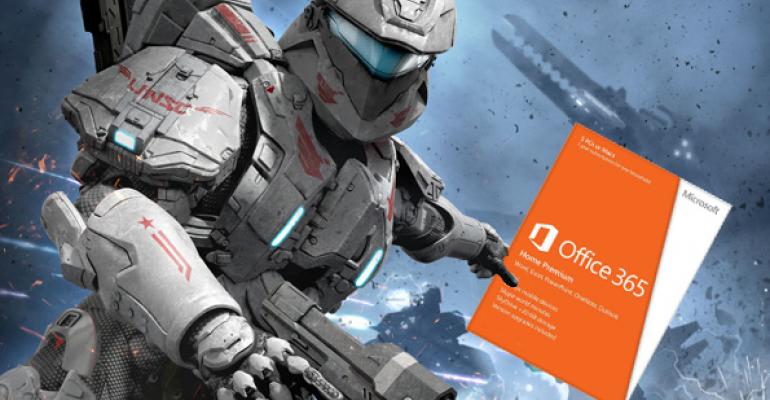 You Got Your Xbox LIVE in My Office 365!

In a bizarre new cross-promotion that combines two of Microsoft’s most popular online services, customers who sign up for Office 365 Home Premium through late September will get a free year of Xbox Live Gold as well, a $60 value. It appears that existing subscribers are out of luck, however.

According to the promotion page on the Office 365 web site, the offer applies on to those who have activated a new Office 365 Home Premium (or Office 365 University) subscription between today, July 18, 2013, and September 28, 2013.

There are three steps.

Get your Xbox code. Get your code by October 31, 2013 by signing in with the Microsoft account email and password you used to set up your Office 365 subscription.

Redeem your Xbox code. Redeem your code at Xbox.com or on your Xbox 360 console to begin your 12-month Xbox Live Gold membership.

This offer raises some interesting issues, I think.

On the one hand, we have a software giant that spent 15 years in antitrust hell on two continents for illegally bundling products. The argument here, of course, is that neither Office 365 nor Xbox LIVE is dominant, so no worries. Still, a bit strange.

On the other hand, as I noted previously in Amazon Spreads Its Ecosystem, that firm also has some unique advantages because of its product diversity, so why shouldn’t Microsoft exercise its own bundling muscles? For example, Amazon’s Prime shipping service and Amazon Video seem to have absolutely nothing in common—after all, Prime shipping is about physical products and Video is about electronically delivered TV show and movie content—and yet Amazon comingles them for its best customers. Why shouldn’t Microsoft do the same?