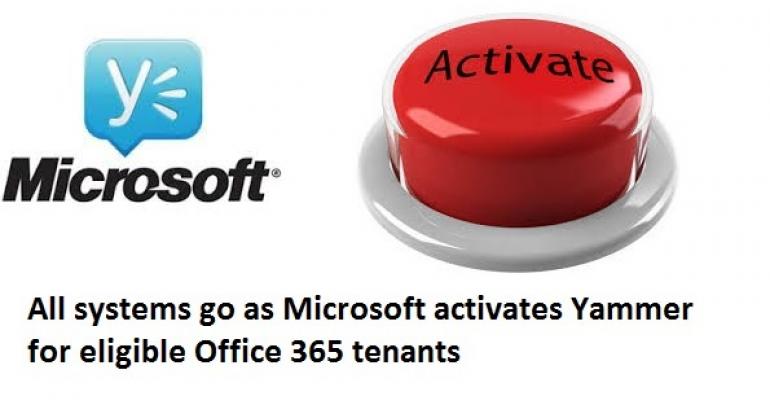 Yammer for all (whether you want it or not)

The news that Microsoft has decided to activate Yammer for “every eligible Office 365 tenant” warmed the very cockles of my heart, even if some doom-and-gloom was introduced by the notion that this might be a tactic to stop customers looking at Facebook at Work. I think not in this instance. There’s nothing happening with Facebook at Work that has caused me to revise the conclusion I reached last year.

Yammer has been available to Office 365 enterprise tenants for quite a while. The difference now is that Microsoft is activating the application to lay the groundwork for “a new set of high-value user and admin scenarios.” Some examples followed:

“Yammer will hook into the Office 365 Groups service in the first half of 2016 to deliver powerful cross-suite scenarios that let you escalate your Yammer conversation into a Skype call, schedule a meeting using Outlook calendar, access your files in OneDrive, create tasks in Planner and more, all from your Yammer group.”

Achieving effective collaboration within companies is important and enterprise collaboration technology aims to assist in that goal. It's an area of technology that receives a lot of press and fuss and bother from time to time, ever since Lotus Notes introduced the idea some decades ago. Microsoft paid $1.2 billion to buy Yammer in June 2012 to join the party. A bright new world of collaboration was promised and many zealots and evangelists leapt into the fray to convince companies that old-fashioned means of communications such as email were positively harmful to the mental health of employees, all of whom would be greatly relieved if they could only be exposed to the calming influence of Yammerdom, or whatever other Yam-prefixed noun of the day was used to exhibit the clear superiority of yammering.

Some still fight the good fight (in their eyes) and try to convince the world that Yammer should replace email. One recent example featured the use of Exchange transport rules to block messages sent between people in an organization, who receive a non-delivery notification advising that they should “try Yammer”. That’s quite an example of how to discourage collaboration.

It’s obvious that Yammer hasn’t quite turned out to be the commercial and market-leading success that Microsoft hoped. I think some good things flowed from the acquisition (which isn’t always the case). The Microsoft Graph is now a major part of Office 365 and provides the foundation for the unified programming model and new services such as Delve Analytics. In addition, the Yammer team probably helped Microsoft to move its development and product release practices to a more cloud-centric model.

It’s also fair to say that Yammer does a good job of hosting the Office 365 IT Pro Network for almost 80,000 people. Hosting a large collaboration network for users drawn from around the world shows Yammer at its best and, in my opinion, the IT Pro Network is a better and more usable place to seek information than the TechNet forums.

But as I have pointed out before, Yammer’s oxygen has been taken away by subsequent developments, notably Office 365 Groups, including its recent extension into the new workgroup task management application, Office 365 Planner. Despite protestations to the contrary and ongoing promises from Microsoft, the lack of evolution in the Yammer platform is pretty telling.

Office 365 Groups take less effort to deploy and have an integration with Outlook (2016) that makes them very approachable for the majority of Office 365 users. As Reuters reported earlier this week, Exchange and Outlook are key to the success Microsoft has enjoyed with Office 365. The results that Microsoft reported for Q2 FY16 (to the end of December 2015) underline the success as the revenue run rate for commercial cloud services increased by $1.4 billion over the last six months. I doubt that Yammer contributes much to that figure.

Maybe I’ve been wrong about Yammer and its role in enabling enterprise collaboration all along. I think not, but have been known to be wrong in the past. Time will tell whether activating Yammer for all will be a masterstroke. Activation is one thing; usage is quite another.