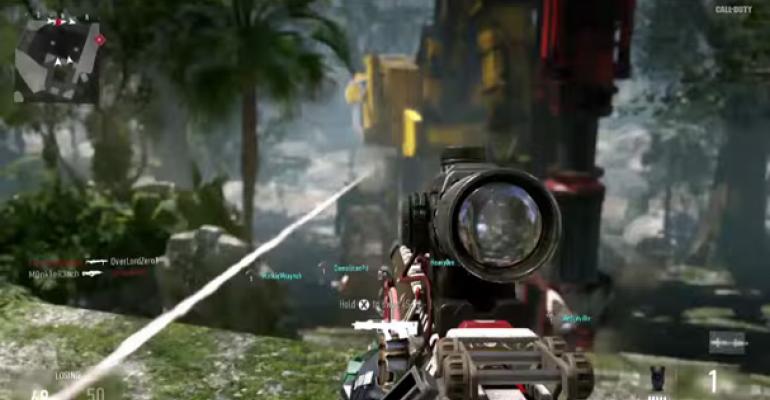 Last year, I took an actual vacation for the first time in over 10 years. It went well enough that I did so again this past week. But as it turns out, life—and the Internet--goes on without me. So here's a quick peek at some of the past week's developments that I missed writing about while I was away: Some Skype, OneNote Online, Windows Phone developer, Xbox One, and Call of Duty news, and more.

You used to need a Skype Premium subscription to use group screen sharing, a Skype feature that lets you share screens with two or more people. Not anymore: If you're using Skype for Windows desktop (or Skype for Mac), this feature is now available for free. To learn more about this feature, check out Skype's Screen sharing site.

And speaking of Skype, Microsoft this past week released an update to Modern (Windows 8) version of the app, and it now supports new capabilities like message editing and some fixes. You can find out more on the Skype Garage & Update blog.

I like the speed at which Microsoft updates its Office 365 offerings on the web and mobile devices. And this past week saw an interesting update to a very specific part of that ecosystem, OneNote Online, the web app version of Microsoft's note-taking solution. Each of the changes in the update is related to co-authoring. A new People Presence feature helps you see who else is using the same OneNote notebook or page as you, regardless of which OneNote client they are using, so that you can connect and collaborate with them if needed. And edits are now nearly in real-time, which means everyone collaborating on notes will be up-to-date as you work. You can access OneNote Online in any version of Office 365, at Office Online, or directly from OneNote.com.

Following in the footsteps of the recently merged Windows and Windows Phone developer programs, Microsoft announced last week that Windows Phone app developers can now respond to user reviews in order to resolve problems and provide updates. The software giant has a strict set of policies to ensure that developers don't use this capability to spam or sell other services and so on, and it says it will revoke permissions if anyone abuses the system.

What's a potential gift-giver to do if you intend to only purchase Xbox One (or Xbox 360) game titles digitally because of the convenience? Well, you could always buy that person an Xbox gift card, of course. But if you want to be a bit more specific, Microsoft might be on to something: The firm is testing digital download codes for select games and add-ons at participating retailers in the U.S. and United Kingdom. The codes look and work like other Microsoft/Xbox gift cards: They're basically a piece of cardboard that retailers can hang on hooks and sell. But in this case, the enclosed card is for a specific game. According to Microsoft, it's starting off slow with digital download codes for select map and expansion packs for popular game franchises like "Halo" and "Forza," as well as digital games like "Max: Curse of Brotherhood" and "State of Decay." But other digital codes will be made available in the coming months, and in more countries.

This actually happened before I went on vacation, but I never really wrote about it. Electronic Arts is starting a new game subscription service for Xbox One called EA Access that is sort of a "Netflix for video games." For just $5 per month, you can access games in a growing library that's starting off with such blockbusters as Madden NFL 25, FIFA 14, Battlefield 4 and Peggle 2. But there's more: EA Access members get a 10 percent discount on any digital game or add-on purchases, and will be able to download new games 5 days before they are available to non-members: Madden NFL 15, NHL 15, FIFA 15, NBA LIVE 15 and Dragon Age: Inquisition will all be made available in this way. I'm as suspicious of our increasing reliance on subscription services as anyone, but if you're even a semi-engaged Xbox One gamer, this is about as close to a no-brainer as it gets. For the cost of one normally priced EA video game, you get a year of pretty amazing benefits. Sounds good to me.

The Wall Street Journal's ability to promote anything that is not Microsoft has always amazed me. The latest example, Do You Really Need Microsoft Office Anymore?, provides a fictional account of how the publication's big business readers can do without the most crucial productivity tool of the modern age. We're told that most of Office's 1.1 billion users are "forced" to use the products (those damned IT departments!) and don't actually choose to do so. (Shades of "businesses buy PCs, real people buy Macs," that fictional world where 90+ percent of computer purchases are supposedly not made by people.) Here, we're presented with Google Apps (Docs, Sheets, and Slides) and Apple iWork as if they are actually viable alternatives for anyone who needs to use office productivity solutions for real work. (The iWork one is particularly clueless and betrays the Apple focus on the author of this piece.) I just find the whole click-bait baloney to be tiring, if only because there's a reason Office is one of the most successful software products ever made: It works really, really well, and is today a great value thanks to Office 365. Maybe next week, the WSJ can ignore OneDrive in a roundup of cloud storage services for consumers or something. Because that's what they do: Ignore Microsoft completely or mention it only to denigrate it.

This one is going to be controversial. Activision this week provided the long-awaited video preview of Call of Duty: Advanced Warfare multiplayer. And as one of the most avid COD gamers around, I have to tell you ... this is not COD. Instead it's sort of a cross between Halo and Unreal Tournament multiplayer, and I'm just not sure how I feel about that. I sort of get that Activision needed to make some changes—many feel that COD, and COD multiplayer in particular—had gotten a bit stale. But here's what I'd rather see: An online service called COD: Legacy that provides every single map, weapon, killstreak, and whatever else from all of the COD games from Call of Duty 2 on up that allows gamers to mix and match as they please. This would let us access remastered classic maps with modern weapons, create our own gaming playlists, and more, and would generally satisfy the hard core COD gamer. As for Advanced Warfare, yes, I'll be the first in (a virtual) line. But this may be a step too far in a new (for COD) direction. I guess we'll find out come November.