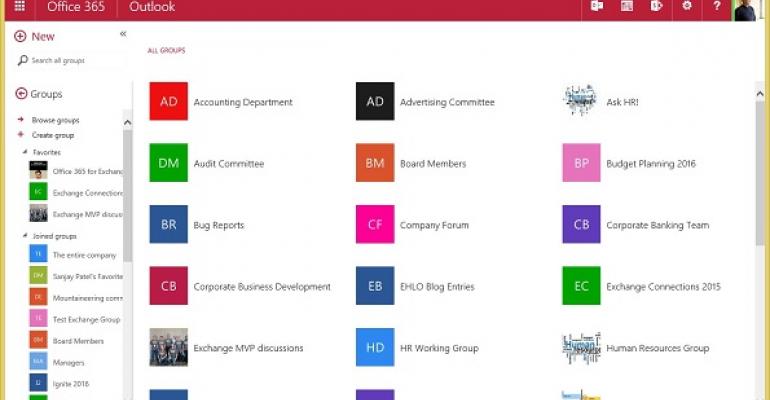 On Tuesday, I discussed how changes in engineering practices are driving innovation within Office 365. One of the more interesting areas is the use of Office 365 Groups to provide a single identity for access to applications and data drawn from across the service. Microsoft spent a lot of time discussing what they’re up to with Office 365 Groups at the recent Ignite conference. The news about groups, which will remain limited to Office 365, can be broken down into two parts: what Microsoft is enabling right now for tenants around the world and the features included in the roadmap for the rest of 2015.

Four major updates or announcements have happened recently. First, Microsoft has revamped the SharePoint document library associated with each group and used to store shared files to bring its functionality up to speed with other SharePoint document libraries. Specifically, groups now support a recycle bin to allow deleted documents to be recovered, sharing of documents from the library with other users, and rename and copy operations. None of these are earth shattering in themselves, but it’s all functionality that is welcome because each feature is often required when working with collections of documents. Quite how the recycle bin took so long to appear is a mystery in itself. Microsoft also provides a “Shared with us” view for document libraries to provide a quick view for users to know what files have been shared with a group by other groups or users.

Second, more information emerged at Ignite about the unified Office 365 REST-based API announced at the Build conference. The API covers much more than groups, but Microsoft made a big thing at Ignite of the potential that exists for developers to build applications that take advantage of groups as an access mechanism or to incorporate threaded discussions or the shared calendar. More information about the new API, including an interesting way to test out access to various types of Office 365 data can be found on the API’s landing page and reference.

Third, behind the scenes Microsoft has transformed the type of Azure Active Directory object used by Office 365 Groups. Originally, these objects were mapped onto a group mailbox object, which made them impossible to synchronize with an on-premises Exchange deployment. Now the objects are treated much like regular distribution groups, which makes it possible to synchronize them with on-premises Active Directory and use them with on-premises Exchange. You’ll need to use the AADConnect tool for synchronization. Moving to the new object type also removes a number of scalability restrictions that previously existed. Also, the group naming policy used to control the names that users can give to distribution groups now applies to Office 365 Groups too.

The original implementation of Office 365 Groups was handicapped by poor PowerShell support. You could examine a group’s properties but not much else. The old –GroupMailbox cmdlet sets are replaced by new –UnifiedGroup and –UnifiedGroupLinks cmdlets to provide a much more powerful framework upon which to script group management. It’s even possible to create a script to convert a traditional Exchange distribution group to an Office 365 group!

All of this is goodness and make Office 365 Groups a more attractive platform for collaboration, as long as you’re an Office 365 tenant. Because Office 365 Groups are designed to leverage so many parts of the service, Microsoft confirmed that this functionality will not be transferred on-premises.

Microsoft also took the opportunity at Ignite to announce what they are working on to enhance Office 365 Groups. By the end of 2015, they hope to roll out the following:

Microsoft also pointed out that you can already add a group to a SharePoint site and so solve one of the perennial issues associated with management of site permissions by using groups as the basis for adding and removing permissions. They plan to make this process much simpler and easier to use in future.

All in all, the amount of development going into Office 365 Groups is really quite amazing. The potential present in the model was obvious from its beginning, but it’s so much better when the potential is being realized.