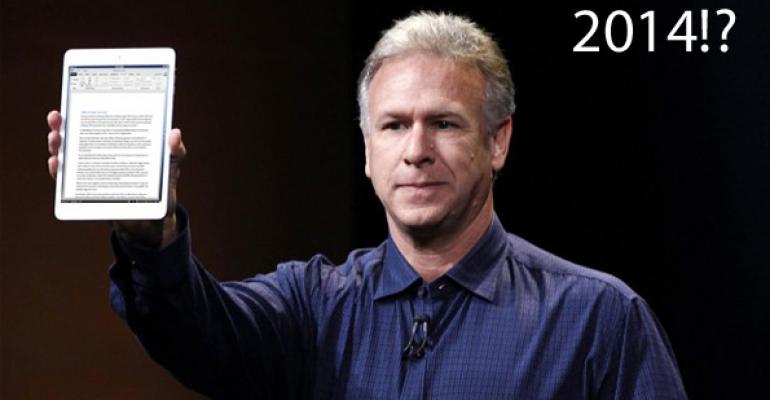 A Theory about the Office on iPad Schedule

Could Office for iPad really be delayed until late 2014??

Mary Jo Foley has published a fascinating peek at the timetable for Outlook RT, as well as coming versions of Office on iPad, Android, Mac OS X, and Windows RT. And while the dates are perhaps further out than some would like, I do have a theory about why this might be so.

Be sure to check out Mary Jo’s post, Microsoft's Office for iOS, Android: Not until fall 2014?, for the full “Gemini” schedule rundown. But the big take-away here, to me, is the timing of this stuff. It breaks down like so:

To be clear, Office for iPad and Android is apparently scheduled for over a year from now. How could that possibly be the case?

My theory is that given the obvious internal debate over the pros and cons of Office on iPad inside Microsoft, a deal was struck: Yes, the Office team could agnostically support non-Windows platforms with the Office 2013 wave of products. But it needed to wait until Windows 8/RT was firmly established in the market. This allowed Office to hold off on the iPad/Android releases until the second round of product releases (Gemini) and focus on Windows (and the Office 365 online services) for the first round.

But the implications are far more serious for Windows. Imagine what would have happened if Office for iPad had shipped alongside Office 2013 for Windows 8/RT (remembering that these products were originally scheduled for a concurrent release). It’s even worse when you look back and realize how awful the first-gen Windows 8/RT devices were, with PC makers not shipping adequate volume or diversity of tablets and other non-traditional PC devices.

Office for iPad, launched at the same time as Windows 8/RT, would most likely have killed the market for Windows 8 and RT devices. As it was, that market was already severely diminished and below expectations. But with a viable alternative tablet, it could have been game over. And the ramifications of that decision would have impacted far more than just Windows 8/RT: The PC market could have literally collapsed, much as the video game market did in 1983. The fallout would have included PC makers going out of business/being sold, a serious and potentially permanent hit to Microsoft’s bottom line and the ouster of Steve Ballmer. I’m talking tech Armageddon here.

2014 is still a long ways away. I’m surprised it’s that far out. But even if the most modest PC sales predicted do occur, this means somewhere around 500 million Windows 8/RT PCs and devices will be sold by that time. It means that virtually all Office customers who were in a position/mind to upgrade in that timeframe will have already upgraded to Office 2013 or, better yet, adopted some Office 365 version. It means that any Office iPad uptick will be complementary, not a rip and replace.

As an aside, this staggered release could also explain why Microsoft calls this version of Office “the new Office” instead of Office 2013. We’re going to be seeing new release of Office 2013—sorry, the new Office—over a very long period of time, not just in 2013, but all the way through 2014.