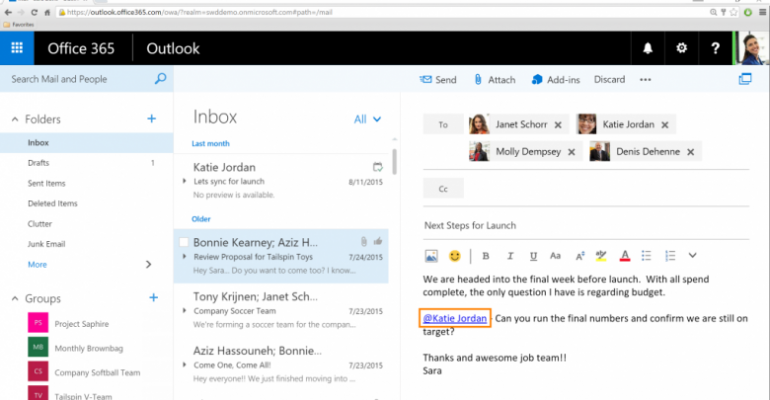 The news that Microsoft is about to make Outlook Web Access (OWA, or if you work for marketing, Outlook on the web) and Outlook 2016 behave like Facebook filled me with distaste. I guess it’s because I consider Outlook to be a working tool rather than a method to stroke the egos of insecure correspondents.

The deal is this. Before the end of the year, OWA users who connect to Exchange Online will be able to “like” messages, the idea being:

“The new Like feature in Outlook on the web provides an easy way to visibly endorse a specific email and call it out as something worth attention—perhaps a statement or idea you support. To Like a message, simply click the thumbs-up icon in the reading pane. This turns the icon from gray to blue, notes within the email that you liked the message and adds a thumbs-up icon in the email list view. Anyone on the thread can Like a message, and their Likes are identified and captured within the message as well. If someone likes your email, you'll receive a notification letting you know."

“Likes” are already present in the integration of Office 365 Groups with Outlook 2016, but I couldn’t get excited about them there either. I am also unenthusiastic about the wholesale use of the word in conversation where “like” appears to be used as a conjunctive suitable for all occasions. Or as a word to introduce a new comment or idea. Or even correctly, to inform the listener that you appreciate a thought, idea, or action.

All I can see is that bringing bad Facebook habits to Outlook is an attempt to be cool by having the same features as everyone else. It makes Outlook more palatable to a certain class of people who seem to be able to express an opinion on everything and, more importantly, need their egos to be massaged by the constant reassurance that they are truly loved by all and sundry who work with them.

The real problem is that “liking” a message implies approval of the entire content. I might like a thought expressed in a single sentence or paragraph and not particularly care for other opinions in a message, yet once I click the “like” key, I signal approval of everything voiced by the author. That doesn’t seem right, particularly in a business context. But then again, many people today rush to reply to messages with a thoughtless (or breathless) “awesome” where they might not have done so had they read the full text of the message. So perhaps “like” is the equivalent of a heartfelt “awesome”.

An advantage could be gained if “likes” replace the flood of +1 messages that are often generated after a message is sent to a large group. It’s obvious that tracking a numeric count of these responses is a neater and more efficient solution than working through all the various replies, complete with all of the text of previous responses tacked on to the end of the message. However, many responses in email threads do contain added value that might be lost if likes became the norm, simply because it doesn't take any effort to like something whereas some brain cells have to be deployed to compose a cogent and thoughtful response.

In my most cynical mood, I can imagine a rush of “likes” for every missive sent by CEOs and other senior executives in a modern version of brown-nosing. The sad truth is that senior executives probably care very little whether their latest epistle from the mountaintop is liked by the great unwashed. They will continue to do as they like whether people like it or not.

The second great advance trumpeted by Microsoft is “Mentions”, described as follows:

"To use Mentions, simply add the @ symbol in the body of an email. This will bring up your frequent contacts as well as access to your directory. Select the person you want to highlight, and they will automatically be added to the To: line if they were not already included. In addition, their name will be highlighted in the message in blue and they will receive an @ flag in their inbox view next to the message. Furthermore, they can sort by their @ messages to ensure they respond to all messages in which they were mentioned.”

Hmmm… no doubt we’ll soon be forced to use the truncated text found in tweets as well.

Seriously, I can see more benefit in Mentions than I can in Likes because it is a method that should add precision to communication in email threads by clearly calling out the person to whom the reply is addressed. Of course, you can do this today by editing the addressees for a message to move the people to whom you wish to respond to the To: line and make everyone else a Cc: recipient, but who’s going to take the time to do that?

It would be good if Microsoft provided Office 365 tenants with some method to control the use of Likes and Mentions. It would be a good idea if the Set-MailboxMessageConfiguration cmdlet was extended to allow bulk enablement or disablement of both.

I don’t have a problem with attempting to revitalize a 20-year old Outlook with some new ideas. In fact, I have great hopes that the new boss of Outlook, Javier Soltero (ex-CEO of Acompli), will introduce some new thinking to refresh Outlook in all its various guises. I wish Javier well, but I won’t “like” the email that announced his appointment.