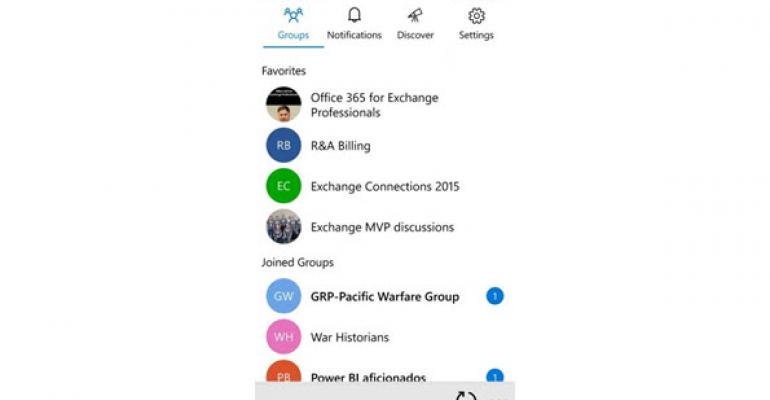 At the Ignite conference last May, Microsoft promised to release a mobile app for Office 365 Groups on the Windows Phone, iOS, and Android platforms. Four and a half months later and following a demonstration of the app by Satya Nadella at last week’s SalesForce conference (Groups appear around the 18:00 mark), Microsoft released the first version for Windows smartphones. You can download the app for Windows Phone 8.1 and Windows Mobile 10 from the Microsoft Store. You can download the iOS version from the Apple App Store and the Android version from Google Play. More details will be released at the Office 2016 launch at 2PM PST today.

Note: According to the Outlook Groups FAQ, the apps are currently available as follows:

For Android and Windows phones: Outlook Groups Mobile is available to download worldwide, except for China and France.

For iOS: Outlook Groups Mobile is available for download in the United States and Canada.

Obviously, limiting the iOS platform to just the U.S. and Canada is not optimum. I believe that Microsoft will lift this restriction soon.

Oddly, the app is named “Outlook Groups”, which seems strange because up to now Microsoft has made much of how Office 365 Groups draw from many different parts of the service. Exchange Online provides group mailboxes for conversations and calendars, SharePoint Online provides the document libraries, and OneNote Online delivers a shared notebook. Everything is orchestrated by Azure Active Directory with a promise that more features will be extracted from Microsoft’s online toolbox.

Perhaps the Outlook Groups moniker is to open up clear blue water between these groups and those managed by Yammer, which have their own app. Currently, zero points of integration exist between Yammer and Office 365 Groups, the positioning of which often confuse administrators and users alike. Microsoft has published a blog saying that Yammer and Office 365 Groups will work together better in the future and an official roadmap item exists saying that "Yammer integration with the Office 365 Group service managed by Azure Active Directory enables standard membership across Office 365", but so far there's little sign of that promise being fulfilled.

In any case, you absolutely need an Office 365 account before you can use the Outlook Groups app. Once logged in, you’re connected to the same set of groups that you use with Outlook Web App and Outlook 2016. The same set of favorite groups are shown followed by the other groups to which you belong. I assume that the Microsoft Office 365 Groups REST-based API is used to fetch and work with the data used by the app. As you can see from the screenshot, the number of new items for each group is clearly visible.

The first thing to realize about the Outlook Groups app is that consumption is its primary role. Sure, you can contribute to conversations, but those contributions are likely to be brief, unless you’re a maestro of software keyboards and enjoy using them to write paragraphs of text. On the other hand, you can post photos to conversations. Contributions shown up as items in the Sent Items folder in your mailbox.

You can also open the document libraries and edit files held there, assuming that you have suitable apps on the device. I was able to edit Word documents and Excel worksheets, but the edits are again limited by the capabilities of the device. For instance, although I store drafts of all my blog posts in a document library, there’s no way that I would attempt to compose a long post on a Windows smartphone, perhaps even the large-screened Lumia 1520. Yes, it’s possible to edit text on a 5” screen, but life is too short to try. Perhaps things are different when apps like this run on an iPad Pro or similar device. I guess it must be, because I’m writing this text on a Surface Pro 3!

Curiously, no access to the group shared calendar is to be found. Maybe this will come in a future version. Another feature that’s missing is a good browse facility. Any time I attempted to use the “Discover” option, which I assume is designed to let users search for groups that they haven’t yet joined, I was told “we can’t find any groups to suggest right now”. Hmmm…

Unlike the other clients, you can’t use this app to create or manage groups. I’m happy to see that this is the case. Creating a new Office 365 Group should not be done on a whim as new groups should have a definable purpose and not duplicate groups that already exist. The management features that support Office 365 Groups are already underdeveloped and immature without having to cope with a new client that might ignore the OWA mailbox policy setting that controls whether users are allowed to create new groups (I don’t believe the API supports this setting) or the naming policy that might be in place for Office 365 Groups and distribution groups.

Eliminating management features from an app is better than attempting to do a half-way job. The Power BI integration with Office 365 Groups demonstrates how not to create new groups (to their defense, the Power BI team have admitted to me that they need to improve and have told me that they are engaged in that work).

Overall, I like the Outlook/Office 365 Groups app. It does the job of allowing users to access the content managed through groups from a mobile platform without stretching its functionality into areas where the app might run into problems. Of course, given the low market penetration of Windows Phone, the iOS (in particular) and Android versions will be the real test as to how well users take to the app.