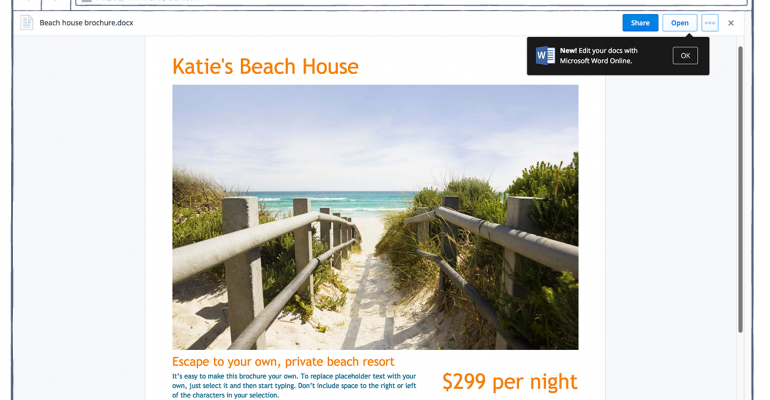 After integrating Dropbox into their iOS and Android based Office apps last November Microsoft has now brought that same capability to their web based Office Online.

When Microsoft and Dropbox announced they were going to collaborate on document storage for Office apps it surprised many because they could be considered competitors in the cloud storage business.

However, this is a journey down a path Microsoft has steadily been on since the arrival of Satya Nadella as CEO just over a year ago.

The companies mantra of Cloud First, Mobile First includes them very actively getting their products and services on all platforms plus working with competitors to create a gateway to Microsoft portals such as Office Online.

So what is new with this update between the two companies?

- The ability to open, edit and save documents directly into your Dropbox account.

Dialog box for opening files in Dropbox from Office Online

If you are over on Dropbox looking at files then you just have to click the Open button for a document you are previewing (Word, Excel, PowerPoint) and you can edit it right in the Dropbox browser.

So whether you start in Office Online, or from Dropbox, it’s simple to work with Office and Dropbox on the web. All Dropbox and Office Online users have access to this new experience today.