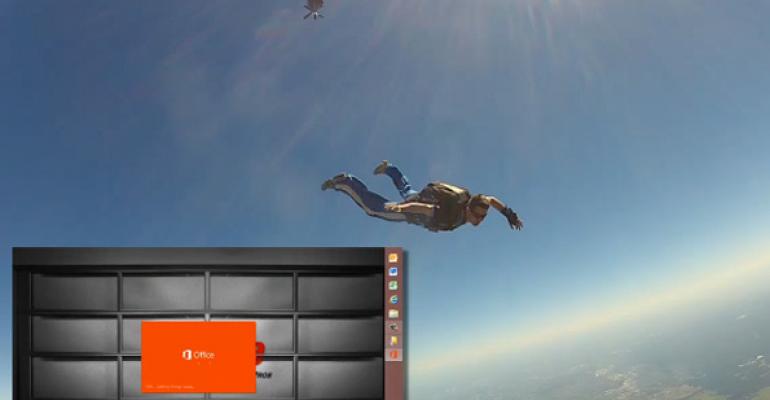 MSI vs. Click-to-Run: It's no contest

In the latest episode of Microsoft’s Office Garage video series, Yoni Kirsh and Jeremy Chapman explain the differences between Windows Installer Package (MSI) and Click-to-Run package types, how to download Click-to-Run builds for use with software distribution tools, and when its necessary to provision user accounts in Office 365. Oh, and there’s skydiving.

This episode is great because it addresses what is probably the biggest misunderstanding that IT pros have about the new Click-to-Run install type that is used by Office 2013 (and Office 365 ProPlus, an Office 365 offering). Many who hear about “streaming installs over the Internet” and “based on App-V [application virtualization] technologies” assume that the resulting installs aren’t really fully functional, or aren’t true locally-installed applications. But that’s not the case.

(MSI installs of Office 2013 are only available if you have a volume license agreement for Office Professional Plus 2013 or Office Standard 2013. So even the retail packaged versions of Office 2013 use Click-to-Run.)

“I think the similarities between the two installation types will surprise people,” Chapman explains. “And after Office is installed they are both virtually indistinguishable to a normal user.” “The things we tend to care about on the IT pro side—automated deployment capabilities, imaging support, Group Policy configuration management, application and file compatibility, etc.—are roughly the same with both package types,” Kirsh adds.

Here’s a great graphic showing how MSI and Click-to-Run compare:

Some other great points here:

Offline use. Click-to-run still results in a local install of Office. It’s not “cached” or “streaming” or whatever. It’s on the disk. (It streams during install, which means you can use it before it’s fully installed. That’s a benefit, not a problem.) “The only thing we really need a periodic Internet connection for is to see whether my IT department has deprovisioned my account and I can stay offline for 30 days at a time if I need to,” Chapman says.

Bandwidth required for the install. The 32-bit Office 2013 Click-to-Run package is 994 MB, compared to 710 MB for the MSI version. Office 365 ProPlus is about 700 MB. “The main takeaway here is that the network bandwidth consumption of an initial Click-to-Run install is about the same as a network install of the traditional MSI package,” Kirsh says. “Roughly the same goes for your updates. And if you are totally network-constrained, like 56k dial up modem slow, you can install Click-to-Run from USB or DVD media just like the MSI.”

New installs don’t get bigger/slower over time. If you’re familiar with how Office updates could be packaged with the initial Office installer in the past, you know that the update would be tacked on to the end of the install, and as time went by the Office Setup would run slower and slower, and the total package size would grow constantly. With Click-to-Run each build is cumulative and contains all the updated binaries to date, so the overall package size doesn't really change. That means that the Office 2013 install will always take about 4 to 5 minutes before users can start running the applications, regardless of how many updates are added.

There’s a lot more. Check out the original blog post, The new Office Garage Series: Who Moved My MSI?, and the video for the full story.