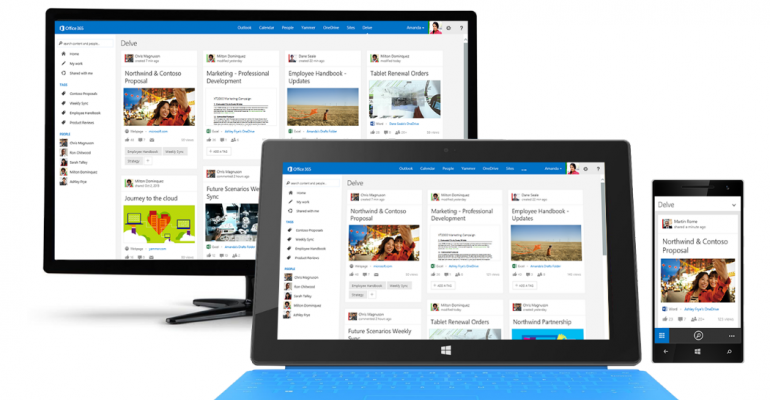 Office Delve rolling out to all Office 365 Business customers

Earlier we shared Satya Nadella's announcement about the availability of a public preview of Office 2016 for IT Pros and developers but that was not the only news he had to share for business customers during his keynote at Convergence 2015.

Following a demo of Microsoft's Office Delve program, which helps users be more productive and connect to information by surfacing content from their contacts and other information channels, he announced the global availability of the service to all Office 365 business customers.

Nadella stated that he begins his day by reviewing Office Delve to see what information and activity is trending in the Microsoft organization.

In a blog post over at the Office blog, Julia White the General Manager for Microsoft's Office 365 team, also confirmed that Office Delve now has the added capabilities to get data from a users email and social feeds in Office 365.

She said this program is intended to open up information to all users in an organization without the limitations that the typical corporate hierarchy imposes. "Delve plays a pivotal role by unlocking the valuable knowledge held by each individual in an organization, and making it easy for people to discover and build upon the work and expertise of others."

Delve’s dynamic card-based interface puts the content that matters most to you and your teammates right at your fingertips. Familiar features like views, profiles and boards make Delve intuitive to use, and ensure that relevant information is readily available, easy to discover and simple to share. And as always, Delve never changes any permissions, so people can only see the information they already have access to.

Sources which Delve can collect information from for an individual includes SharePoint, OneDrive for Business, Office 365 video content, email attachments and Yammer.

This image, provided by Microsoft, provides a great visual representation of how Office Delve curates information for a user.

Microsoft says even more about Office Delve will be shared at the Microsoft Ignite conference which is being held in Chicago, IL during the first week of May.