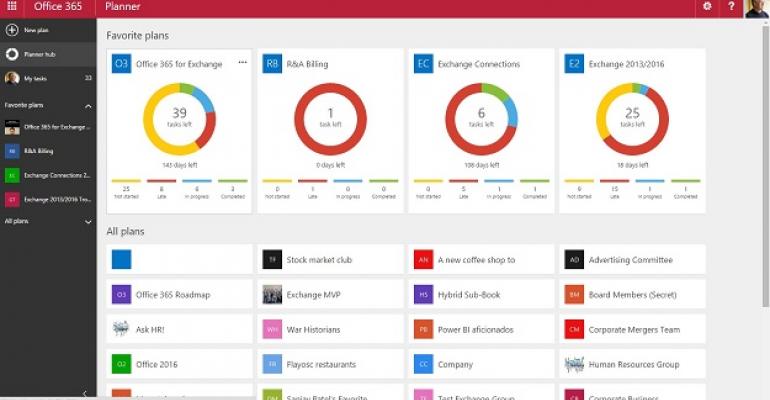 Many questions followed my article introducing Office 365 Planner, so clearly I didn’t do such a good job explaining the topic. Here’s an attempt to do so in a question and answer format. If you have other questions, try asking them in the Planner group in Microsoft’s Office 365 Network.

What is Office 365 Planner?

Office 365 Planner is a new application that Microsoft is adding to the suite of functionality available to tenants. In many respects, it is similar to the popular Trello application and well-suited to the management of small projects or the set of collective tasks owned by workgroups. It is not intended to be as powerful and flexible as Microsoft Project, which remains the tool of choice for project managers and those involved in the day-to-day management of large or complex projects.

See this article for more information on how to use Planner.

Planner is currently available to First Release tenants. Microsoft says that it will be generally available later in 2016. See this blog for more information. Planner is accessible through the tasks.office.com portal.

Some changes are expected in functionality and tuning the feature set between now and General Availability to take account of customer feedback. When available, Microsoft says that Planner will be included in the Office 365 Enterprise E1–E5 subscription plans (including corresponding Government and Non-Profit), Office 365 Business Essentials and Premium plans, and Office 365 Education.

For now, Planner can be activated through a promotional code available from Microsoft or as part of the E5 license. If activated through the promotional code (see this blog for the process to get the code), the license is allocated separately. If through E5, Planner is listed as one of the pieces of functionality included with that license. You can disable Planner by editing a user account and unchecking the box for the license. You can use this PowerShell code to check for accounts that hold a Planner license:

And here's the code to check for users who are licensed as part of E5 (remember to change the tenant name to your tenant):

A plan is represented by a collection of tasks that are assigned to different team members. Each task represents a discrete piece of work or other activity that has to be completed by a certain date.

Office 365 splits plan data across a number of repositories. The plan metadata is held in an Azure-based service while the comments for tasks within a plan are stored in the Exchange Online mailbox for the Office 365 Group associated with the plan. Documents and other attachments are held in the SharePoint Online document library belonging to the same Office 365 Group.

So a strong link exists between Planner and Office 365 Groups?

Absolutely. Every plan is associated with an Office 365 Group so a 1:1 relationship exists between plans and groups. You can’t have a plan without a group – but an Office 365 Group can exist without any link to a plan. If you create a new plan that doesn’t have an existing group, Office 365 will create the group for you.

Anyone who wants to work with Planner should have an Exchange Online mailbox so that they can contribute to plans. They also need to be able to use SharePoint Online if they plan to access files documents held in the document library.

What about people who are outside the Office 365 Group?

You can assign a task to any person who is a member of the Office 365 Group associated with a plan or leave the task unassigned. You’ll have to add someone to the group in order to be able to assign a task to them, but they have to have a user account in the same Office 365 tenant. Microsoft says that external members will be possible for plans when this feature is supported by Office 365 Groups.

Who can create new plans?

Right now, anyone can create a new plan. The OWA Mailbox Policy used by Office 365 Groups to restrict the ability of users to create new groups is ignored by Office 365 Planner. This can lead to a situation where a profusion of new plans (and groups) are created without planning (no pun intended) to create the need to clean up plans and groups afterwards. Microsoft says that they are working on lifecycle policies that will make it possible to check for and remove obsolete plans (and groups), but this feature isn’t available yet.

I want to assign multiple people to a task because they share the work and the responsibility for making sure the task is completed. Is that possible?

Not at present. A task can only have a single owner for now. Microsoft says that they are working to add support for shared responsibilities.

And what about task dependencies?

Well, Planner is designed to be easy-to-use and to bridge the gap between the intensely personal tasks that people set up for themselves in tools like Wunderlist and Outlook and the very structured project management that is done with tools like Project Server or Project Online. If you want advanced planning features such as dependencies, you will have to use a more sophisticated tool.

How do I track the progress of a task?

A task is either not started, in progress, or completed. You can’t indicate the percentage by which a task has progressed either. Planner is designed to be simple!

Six color-coded tags are available to help manage tasks. It’s up to the members of the group/plan to decide how these tags are used.

You can assign checklist items to a task. Each checklist item is independent of the others and is either in a completed (unchecked) or done (checked) state.

What happens when someone leaves the group?

You will have to assign the tasks belonging to that person to someone else. This is a manual process.

Does Planner come with some nice charts so I can see progress at a glance?

Planner includes some charts, but not many. If you need Gantt or burndown charts, you should use a more sophisticated project management solution such as Project Online.

What happens when all the tasks in a plan are complete? Can I close it down and start over?

You can certainly start over by creating a fresh set of tasks but the completed (old) tasks will remain in the plan unless they are deleted. Planner doesn’t have a way to archive old activities. If you need to keep plan information as a business record, you might be better off using SharePoint team sites today.

Can I migrate tasks that I have organized in a SharePoint team site to Planner?

Can I migrate plan information and tasks from Trello?

Can I move a plan to Project Online?

You can, but it will be a manual process because no connection exists between Planner and Project Online.

A bucket is a container for tasks within a plan. In practical terms, you can have as many tasks as you like in a bucket and as many buckets as you like within a plan. By default, a plan starts off with a bucket called “To Do”, but you can rename it to whatever you like.

Can I drag and drop tasks between buckets?

Are templates available so that the right set of buckets and some default tasks are set up when a plan is created?

No. Planner doesn’t support the concept of template plans at present.

Groups are integrated in Outlook 2016, what’s the scene with Planner?

The only client currently available for Planner are web browsers. Although Office 365 Groups are integrated into Outlook 2016, you can’t access Planner from there except to see the comments added to tasks if a plan is associated with a group. These comments show up like other threaded conversations.

Is a mobile app for Planner available?

Not yet. Given the breadth of coverage of Office 365 apps that are available for iOS, Android, and Windows Mobile, it’s reasonable to expect that a mobile app will be available soon.

Can I email a task to a plan and have it show up?

This sounds like a good idea, but it’s not possible today.

Microsoft owns Wunderlist now. Will it connect to Planner?

An integration between Wunderlist and the tasks inside plans isn’t yet available. However, Microsoft says that this is something they are working to create.

Are any PowerShell cmdlets available to help manage plans?

No. Office 365 Groups can be created and their membership populated with PowerShell, but the interaction with plans including the creation of buckets and tasks and their assignment to people has to be performed through a browser.

Is there an API that programmers can use to access plan information?

Yes. It’s in beta and the documentation is available at http://graph.microsoft.io/en-us/docs/api-reference/beta/resources/task.

Will Planner appear for on-premises customers?

Given the dependency that exists on Office 365 Groups and the Azure service, it’s very unlikely that Planner will ever be available on-premises. Microsoft Project Server is available for on-premises clients.

How can I provide feedback to Microsoft?

Through the UserVoice forum at https://planner.uservoice.com/forums/330525-planner-preview-feedback-forum/