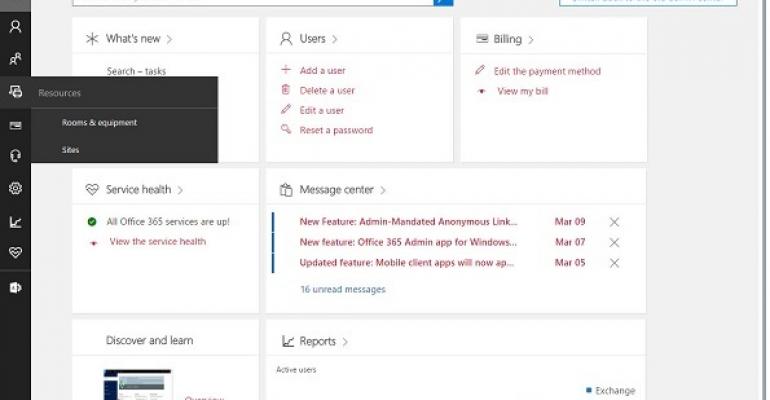 At the start of March, Microsoft began the process of switching out the current version of the Office 365 Admin Center to a fresh design. The new interface has been in preview for a couple of months and is now the default view exposed when portal.office.com is accessed by most tenants. Curiously the switch occurred despite the fact that the new interface is not yet functionally equivalent to the older Admin Center.

Anne Michels of Microsoft explained in a Yammer post that: “We reached a milestone where the functionality used by large portion of our customer base is available in the new portal. Based on that milestone and due to very positive feedback from our preview customers, we’re rolling the new portal out as a default experience.” She went on to acknowledge that “there are specific scenarios that are needed … that are not available yet in the new portal… We’re working on getting to feature parity as soon as possible and plan to achieve this within a few weeks.”

Although some question why Microsoft doesn’t impose a common look and feel across all the administrative interfaces used by Office 365 applications, a certain logic supports the continuing use of the same kind of look and field as exists for on-premises counterparts. For instance, using a similar interface for Exchange Online administration to the EAC for Exchange 2013 and Exchange 2016 on-premises reduces the need for administrators to learn new techniques when they switch from on-premises servers to the cloud.

It’s also worth noting that Microsoft is building specific interfaces for Office 365 when administrative functionality spans multiple workloads. For example, the Compliance Center brings together policies, reports, and other features that work across Exchange Online and SharePoint Online.

Returning to the new Admin interface, it’s certainly true that it is more graphically “interesting” than the older version. The intention is to highlight common tasks and make them easier to perform, both being laudable goals. Experienced administrators might consider some of the interface to be flashy rather than useful, but you have to remember that the majority of Office 365 tenants are small to medium companies whose administrators don’t necessarily view Office 365 as their full-time focus.

I don’t really have many objections that Microsoft has revamped the Office 365 Admin Center and I quite like some of the changes, such as the way that properties are exposed when an account is selected. For instance, it's good to be able to see all the groups to which an account belongs and be able to clean up by removing memberships in the same context. I also like the way that objects are fetched and displayed as required rather than having to move through data 50 objects at a time.

The new interface appears to share some characteristics with the Office 365 Admin mobile app (available for Windows Phone,  Apple iOS and Android) and the Office 365 Admin Universal app for Windows 10 that is currently in beta and available in the Windows Store. The mobile app has been in a state of frequent update since its launch last year and is pretty good in terms of enabling "on the go" tenant administration.

Any heartburn I have arises from the fact that the new interface was released when it was not ready for prime time. Compared to its predecessor its performance seems slower at times and some functionality is missing. It’s hard to be definitive on performance and no doubt Microsoft will tweak web pages to restore normal service. I’ve also run into some odd bugs that I can’t reproduce in any meaningful way, like objects not being listed correctly. But hey, this is the cloud and all will be well if you just care to wait. And it would have been nice to see the new Reports functionality rather than just read about it. From what I've read, I don't think that Cogmotive (who offer free reports for tenants with less than 50 seats) will be quaking in their boots just yet.

Patience isn’t my forte. I would have preferred if Microsoft had waited to sort out the bugs and functionality to make a like-for-like swap possible. No doubt the “positive feedback from … preview customers” tilted the balance and convinced the great and the good who gather in conference rooms in Redmond to make decisions that affect the multitude. We should all be grateful that they decided to let us find all the flaws that proliferate in the new UI.

I’ll probably be marked down as an ungrateful old man for pointing out that the new UI isn’t particularly good (just about the kindest turn of phrase I can come up with). But I can live with that label.

Update: After this post appeared, Microsoft asked me to remind Office 365 admins that they can provide feedback about the new interface through the link provided in the new portal: