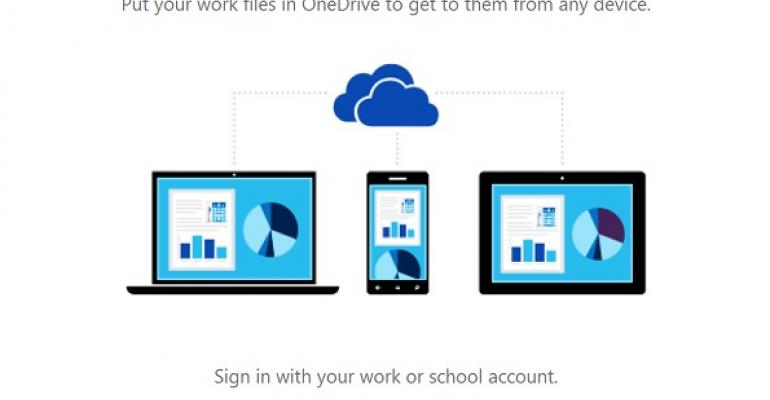 New OneDrive for Business sync client much better but not perfect

On December 15, Microsoft announced that the next generation synchronization client for OneDrive for Business is now generally available. A preview of the new software had been available since September. Despite many requests, I never managed to get hold of the preview so I was quite happy when Microsoft released the new client, which is available for both Windows and Mac OS X 10.9 (and above).

The upgraded synchronization client has been available for some time for the consumer version of OneDrive. In some respects, because the older Groove-based synchronization client was so buggy and unreliable, it’s odd that Microsoft has taken so long to make it available to business customers, but I guess it’s understandable when you consider that they simply had to get it right with this release.

The current version still needs some work to support SharePoint Online libraries (including those used by Office 365 Groups) and Windows 8.1 clients. In addition, the new client doesn’t support OneDrive for Business when deployed as part of an on-premises SharePoint 2013 installation. Microsoft estimates that the work to fill the gaps will be complete in early 2016. The new client supports Windows 10, Windows 8, and Windows 7 clients now. After applying the "EnableAddAccounts" update to the system registry, Windows 10 users can edit the settings of the in-built OneDrive Consumer client to add a business (Office 365 account).

The basic job of the synchronization client is to allow users to work on offline copies of documents belonging to online libraries. Behind the scenes, the client monitors changes made to offline copies and uploads them to the server-based libraries. This is where the previous client fell down because it often failed to upload documents, meaning that changes made to documents by users might be overlooked or ignored, which is obviously not what you want in co-authoring scenarios.

In addition, the older client had limitations dealing with large files and libraries that stored more than 20,000 files or when uploading multiple files at one time. The new client is designed to support files of up to 10 GB, handle large document libraries, and to provide selective control over synchronization, all of which is what it should be.

A reliable and robust synchronization client is needed for Microsoft to persuade customers to replace older document repositories such as Windows-based file servers with cloud services. Given the success of Office 365, it’s logical for customers to look at how they can maximize the use of the applications available in their subscriptions. In most cases, OneDrive for Business and SharePoint Online are available, but no one will move workload to these platforms if they think that any aspect of document storage is unreliable.

The good news is that the new synchronization client exhibits none of the flakiness of its predecessor. At least, I’ve used it to synchronize OneDrive consumer folders as well as OneDrive for Business document libraries on multiple PCs and encountered no problems to date (touch wood).

That’s not to say that the OneDrive synchronization client is perfect because it’s not. Apart from the issues mentioned above (and some odd screen sizing on my Surface Book), some planning and deployment effort is required on the part of Office 365 tenant administrators to make sure that the new client is activated for users. Microsoft has issued a useful guide for enterprise deployment that explains the process. If you don’t have the ability to configure registry keys and push software onto user PCs, some manual intervention is required to ensure that the new client is used (the steps are described in this article).

It would be better if it was possible to update the OneDrive synchronization client invisibly as the current upgrade process is complex enough to create the potential for error. Microsoft’s announcement text says that they are working on a “more seamless experience for users who are migrating from the existing sync client” that’s planned for the first quarter of 2016. We’ll just have to wait to see what is delivered.

But the biggest issue is the need to continue using the older OneDrive sync client alongside its newer counterpart if you want to go anywhere near SharePoint. This state of play puzzles me. Not only is it confusing to administrators, consultants, and users alike (this blog post throws some clarity on the topic), but it also removes a huge amount of goodness from the new sync client.

No doubt Microsoft will fix all the problems and bring forward one sync client to rule them all - or at least one capable of synchronizing with more than OneDrive. In the meantime, the opportunity exists to test the new synchronization client and decide how best to introduce the software to users with as little disruption as possible. Microsoft does their best to eliminate bugs from the sync code, but deploying software always creates the potential for user pain.