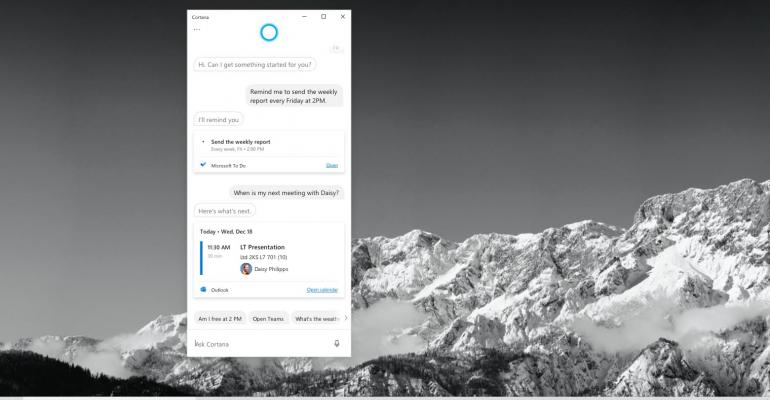 Say goodbye to Cortana on Android and iOS – instead, she’ll take on a new role in the enterprise as a low-code across the entire Microsoft 365 portfolio.

A few months ago, just prior to the release of the Windows 10 May 2020 Update, Microsoft updated their continuing plan to fully shift the productivity function in Microsoft 365 to its digital assistant Cortana. Although previously focused on consumer productivity, Cortana never gained traction in those areas, but the work done in artificial intelligence (AI) and machine learning (ML) to enhance the digital assistants’ effectiveness will now benefit enterprise customers on Microsoft 365 subscriptions.

These new Cortana capabilities are already available to customers and their end users.

Windows 10 (Version 2004), aka the May 2020 Update, was the debut of the updated Cortana App for Windows 10. With all the consumer elements removed, including the ability to only sign into the app using an Office 365/Microsoft 365 account, settings were simplified under its new enterprise role.

The enterprise shift also means the Cortana App for Windows 10 complies with all security, privacy and data governance and protection requirements for each tenant in a Microsoft 365 subscription.

The Cortana App is installed by default in Windows 10 (Version 2004) but Microsoft 365 admins can opt out of it for their organization through their Mobile Device Management (MDM) service or Group Policy.

Once signed in and active with the Cortana App for Windows 10, users can choose to either type their interactions by hand or use their voice to interact with the digital assistant. Voice interaction can be activated using the wake word Cortana or by clicking the microphone icon in the chat box of the opened app.

As with the other new Cortana capabilities, the options to interact with and use the virtual assistant for multiple actions and to retrieve information are quite robust. See the screenshots below for some of the new and updated Cortana capabilities available through the app. 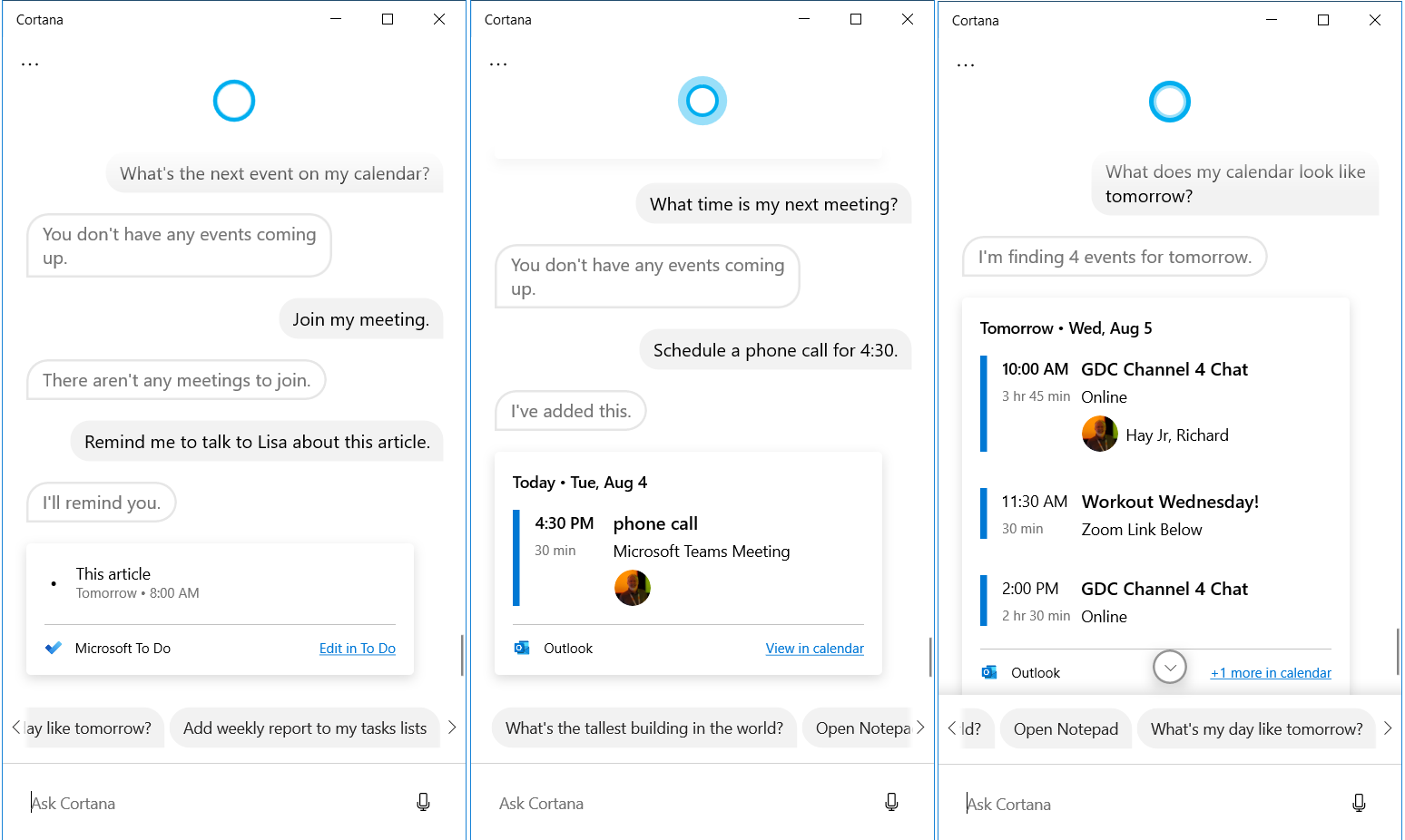 Examples of Cortana's capabilities in the Cortana App for Windows 10.

Play My Emails in Outlook

Right now, this Cortana functionality is limited to the mobile Outlook app on Android and iOS and provides a full slate of interactive commands to triage your email inbox while on the go. Users must be logged into their Office 365/Microsoft 365 account to use this capability. It is not available for personal accounts.

End users will have to opt-in and allow their phone to record audio so that voice commands can be interpreted properly. Of course, this feature also fully complies with the data handling and protection requirements as stipulated by a Microsoft 365 subscription and will observe the policies promulgated under the specific Office 365/Microsoft 365 tenant

Play My Emails is more than just a text-to-voice service to hear emails. Using AI and ML, Cortana scans over the last 24 hours or so of the user’s day including calendar events, emails and other important data to keep you up to date.

Play My Emails is a conversation, not a one-way broadcast. Using natural language processing (NLP) and language used in routine conversations, this Cortana functionality allows users to interact with individual messages to act on the information contained within.

For example, a user can interrupt the flow after hearing part of an email or other piece of information by tapping the microphone button on the screen or just saying Hey Cortana. Cortana can also make a user aware of how long an email is, which would be better read through Play My Emails or left until later.

By taking advantage of those times when a user is on the move, these new Cortana capabilities ensure improved productivity when handling routine email and calendar-related tasks.

Ever want an assistant who would provide a snapshot update on the latest activity that might need your attention? That is where the Cortana Briefing Email comes in, arriving within two hours of the beginning of the workday.

Using AI and ML, Cortana identifies potential pending tasks in email chains and brings them to the user’s attention. In addition to reiterating what’s on the user’s Outlook calendar for the day, the briefing email can give users a quick idea of where their day is headed. Documents and tasks for upcoming meetings are also highlighted.

Through this email, it is easy to mark a possible pending task as complete or book some focus time on the calendar for later in the day by just clicking an associated button. Admins and users can opt-in and out of receiving this daily email.

Between the Cortana App on Windows 10, Play My Emails in Outlook Mobile, and the daily Cortana Briefing Email, most of Microsoft 365 is covered by Cortana’s enterprise productivity role.

One area of Microsoft 365 subscriptions that is missing from the equation is Microsoft Teams; but the Redmond company already plans to provide this capability soon. This new Teams capability will presumably be fully compliant in terms of privacy, security and data protection.

Among the new Cortana capabilities coming to Teams is the ability to make calls, join meetings, send chat messages and share files via the Microsoft Teams mobile app. The idea here, like Play My Emails, is to give users the ability to be more productive on the go through voice interactions rather than typing on a mobile screen.

Some of this functionality is also expected to be available in the recently announced Microsoft Teams Displays hardware, coming later this year.

Cortana in Teams is expected to begin rolling out in the coming weeks.