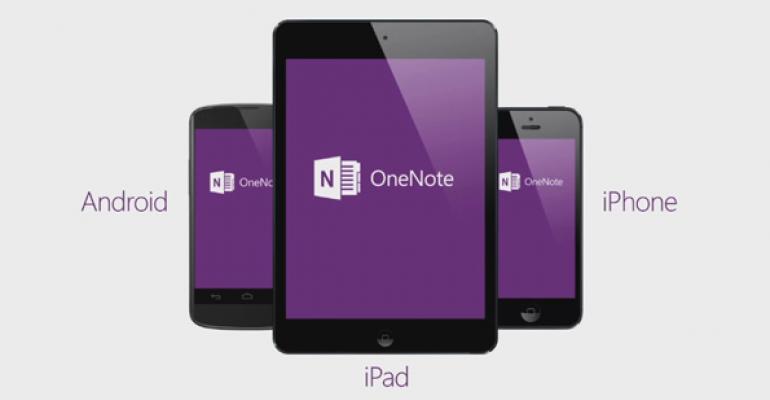 Android, iOS versions of apps catch up with the Windows versions

Microsoft this week launched major updates to its OneNote mobile apps for iPhone, iPad and Android. The new app versions improve back-end notes syncing while bringing their respective UIs up to date with the more modern Windows versions of the apps. Best of all, it now works with SkyDrive Pro in SharePoint, SharePoint Online and the business versions of Office 365.

I actually received a few complaints from readers about these app updates, since many assumed that they in some way pushed the iOS and Android versions of the apps ahead of the Windows Phone 8 or Windows 8/RT OneNote mobile apps. But in looking at the apps before and after the update, I’m pretty sure that’s not the case.

According to Microsoft, the OneNote app updates on iPhone/iPod touch, iPad, and Android offer the following improvements:

Low-level changes. The apps were re-architected to deliver more reliable syncing and enable Microsoft to update the apps more rapidly in the future.

UI improvements. Microsoft enhanced the apps’s UIs to ensure that notes appear the same across all devices and platforms. As you may know, OneNote mobile apps are also available for the Windows desktop, Windows 8/RT (“Metro”), Windows Phone 7.x and 8, and there is a OneNote Web App as well.

SkyDrive Pro/SharePoint support. The previous versions of these apps could only sync with SkyDrive, not SkyDrive Pro on SharePoint Online/Office 365.

More. The apps also feature better sharing features and remove the limit on the number of notes you could create: It’s now unlimited.

This is a fairly major update, then. I had noted the lack of compatibility with SkyDrive Pro/Office 365 previously, and you only needed to use the previous app versions briefly to discover the UI issues. Consider these silly UIs from the previous version of the OneNote mobile app for iPhone:

If you’re using OneNote—and you should be—and one of these platforms—shame on you—then these updates are a no-brainer. Grab ‘em now!