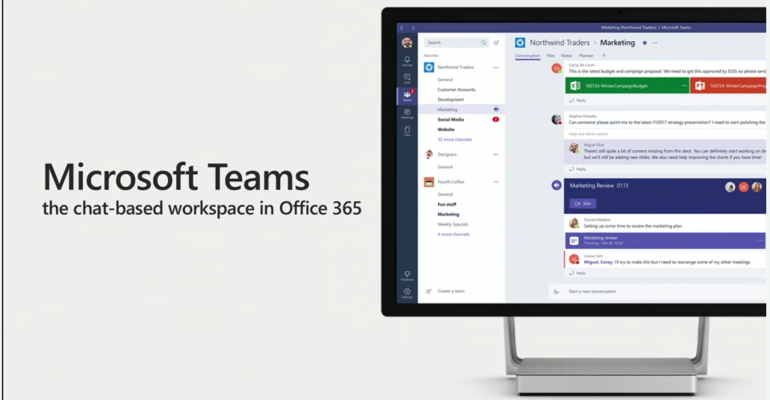 Microsoft Teams: Slack Who? This Is About More Than A Chat Workspace App

If the leaked video and the "welcome to the game" letter from Slack didn't clue everyone in, Microsoft's November 2, 2016, presentation sure did: There's a new competitor in the chat-based workplace product category.

Microsoft Teams is being positioned as a "chat-based workspace," which is the polite way of saying, "Our version of Slack." There are tweaks to the product that Slack users might find jarring -- instead of mentioning users by their handle in a Twitteresque @-sign call, there are red flags attached to messages and an alert in a mentions icon. But for anyone who's cut their teeth on Slack, using Teams looks like it won't require a steep learning experience.

And here's why it doesn't matter: Because the people who are learning how to work on a computer using open tools like Google Sheets and Slack are picking up the skills they need to easily move into similar but more closed tools. Demonstrating a working knowledge of how to tweak an application is far less important than developing an understanding of how to implement the information-managing processes the application exists to provide. It's the difference between knowing how to play "Chopsticks" on a piano and knowing how to read sheet music. Both are skills; one is transferrable from one context to another. Open apps teach users context.

And that brings us to our second point: Microsoft is pushing its products toward a computing model where information is not application-linked but user-linked and context-specific. They said as much during the presentation -- Satya Nadella said, "It's important, as you move across tools, to have your context move with you."

This idea was further underscored in the demonstration when we all saw how people could open up and use applications within Teams. The focus here is on capturing information as it flows from person to person during conversation, and that means incorporating the specific functions of information-managing apps into the conversation.

What this means is that applications are becoming far less siloed; users are learning to look at an application as a collection of information-managing features wrapped up in a specific frame of task-oriented context. (For example, if you're composing something and you want to format footnotes, you'd use Word; if you want to sort citations by source or date, you might use a spreadsheet in Excel; if you're collecting source material for later reading and excerpting, you'd use OneNote.) It makes sense to let people easily access the tools they need for tasks, instead of demanding they switch from tool to tool.

This model of "your information travels with you" also pulls from several of Microsoft's existing tools - like the Graph that maps out relationships between people or pulls in suggested file, or the bots that respond to user actions to suggest more efficient follow-ups.

Teams is going to be a test bed for Microsoft's new notion of turning AI into an extension of your own brain. It is not hard to imagine Microsoft taking the volumes of data generated through human conversation and file activity, then finding a way to have Cortana nudge you about your calendar during a planning conversation in Teams, or finding a way to have MyAnalytics look at your Teams activity and suggest follow-up conversations or collaborations.

But the fact that Microsoft can and does easily pull its array of applications into Teams brings us to the third big deal with this announcement: A big competitive advantage Teams will have is its ability to use Microsoft's apps and features already developed for specific industry regulations. It is no accident that compliance and security regulations were mentioned repeatedly in the demo, and real-world customers talked about how Teams let them maintain a chatty, connected workforce while maintaining security requirements and federal regulations.

Teams may not be a Slack-killer. But it doesn't need to be. It just needs to be the tool that its customers want -- a real-time chat workspace that emulates an experience they may have already had on Slack -- and the tool that quietly advances the notion of platform-independent, device-independent, application-independent computing. That computing notion relies on users thinking of their computing interactions as "grabbing and managing the right information at the right moment."

This app is less about taking on Slack than it is about advancing several of Microsoft's key notions about the next stage of computing. We'll see if these ideas take hold.