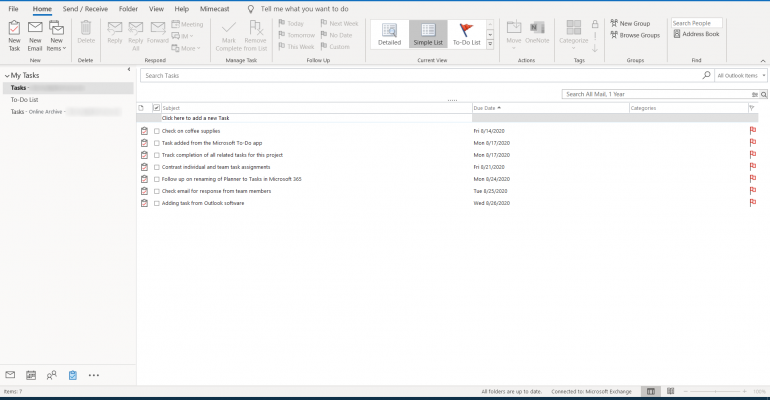 Microsoft Tasks Attempts to Unify To Do Lists Across Apps

Microsoft 365 apps used to have separate task lists with no easy way to see all the To Dos in one place. That changes now with the integration of Planner and To Do into one Tasks app accessible in Microsoft Teams. Here's what you need to know.

One of the smarter moves Microsoft has made recently is to collapse its To Do app (based off its Wunderlist buy) and its Planner app (intended for team projects) into one central app, Tasks, which is now available everywhere across the Microsoft 365 framework.

Eventually, the ability of enterprise users to have one single pane of glass collecting both individual and collaborative tasks will elevate this aspect of Microsoft 365 to a critical piece of productivity infrastructure. Creating, sharing, assigning, and managing the tasks that allow projects to reach their completion is even more important to the enterprise now that so much work has moved to cloud-based, collaborative environments. Microsoft’s introduction of Tasks in Teams illustrates this goal to bring all tasks, both individual and team items, into full integration across the entire Microsoft 365 ecosystem. Right now, though, the best implementation of this fully integrated future vision is in Microsoft Teams.

That is why Microsoft Teams seems to be the best spot for enterprises to begin building out their own task structure and connectivity. Both Planner (aka Tasks in Teams) and Microsoft To Do are available in the same channel and changes made there are synched across all instances of those individual services. Right now, although they are visible alongside of each other in the Planner channel in Teams, the tasks generated in To Do and Planner continue to reside in their respective services.

Since the Microsoft Tasks app will be the designated system for productivity and collaboration, it is important to understand how to access individual actions items (To Do) and collaborative deliverables (Planner) across Outlook, Word, Excel, PowerPoint, and Microsoft Teams.

That means discovering where Tasks lives in each aspect of Microsoft 365 and knowing where individual and team to-dos can be created, updated, managed – and where they sync and do not sync across apps in Microsoft 365. (The lack of simultaneous synching will need to be addressed in future updates; nobody wants to make “sync tasks” part of their task list.)

Before moving ahead, let us talk names and backgrounds for the apps that will comprise Tasks.

Microsoft To Do was initially released in April 2017 and is available to all Microsoft 365 subscribers. It is purely focused on tasks and their management.

Microsoft Planner was released in 2016 and was also available across business and enterprise Microsoft 365 subscriptions. Planner was built to help teams create plans, assign, and manage tasks, as well as share files, communicate, track projects, and collaborate with other team members.

Microsoft’s Naming Roadmap for Planner to Tasks in Teams and Mobile.

Until that happens, for the purposes of our exploration, we will use the name Planner throughout this article.

The next step in exploring Microsoft Tasks is understanding where your tasks connect across these services. 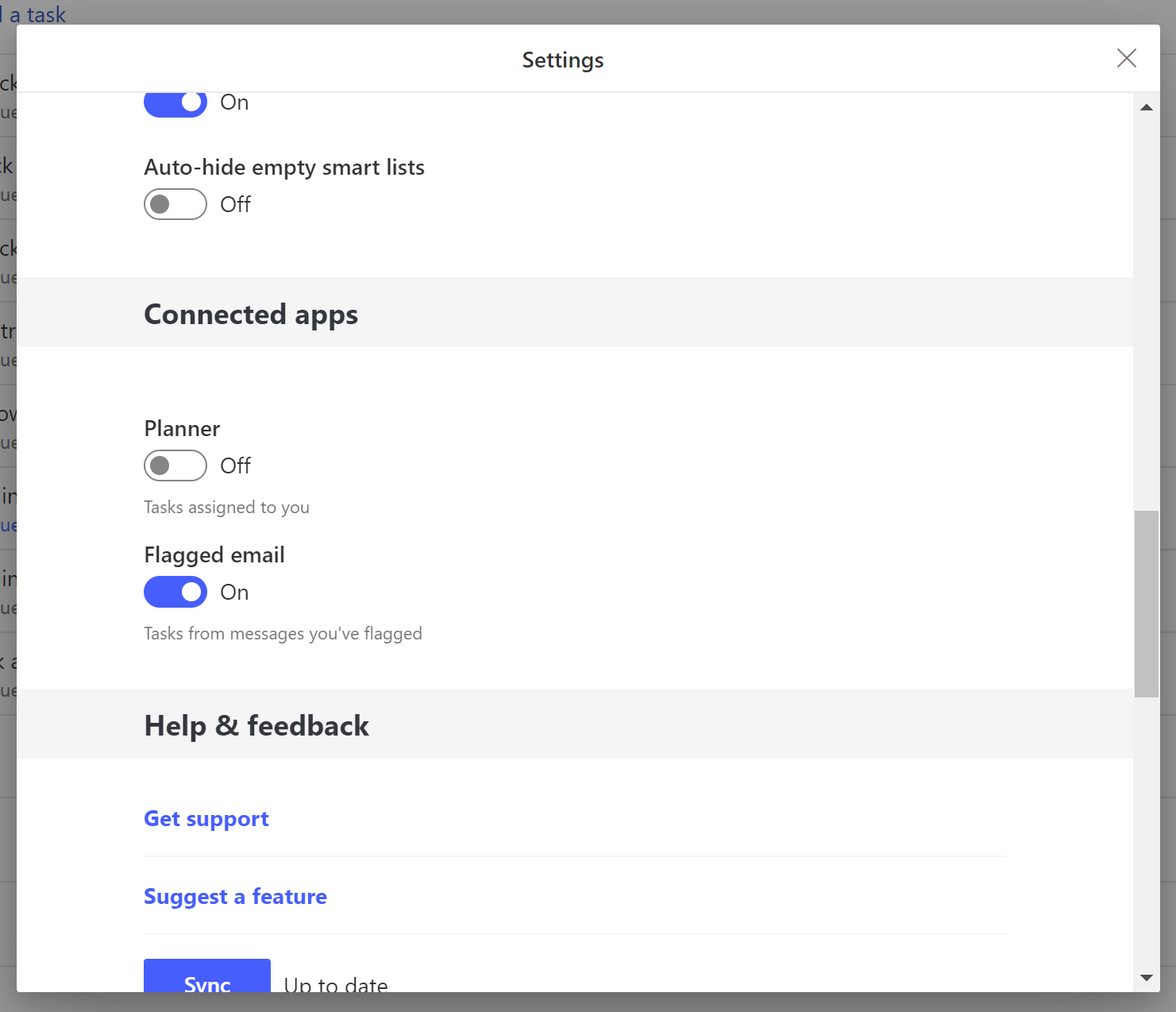 This toggle will sync assigned tasks created in Planner with Microsoft To Do. This option is available on the web interface or in the mobile app.

Once this connection has been made, updates to individual tasks will be synched across both services. Note, however, only individual tasks created in Microsoft To Do and assigned to the end user will sync back to Planner itself.

At this point you can see tasks in Microsoft's Planner and To Do all together with full capabilities for updates synching back and forth.

The next place to get the Microsoft Tasks ecosystem connected is in Microsoft Teams, which has become a central hub of team collaboration and connectivity. 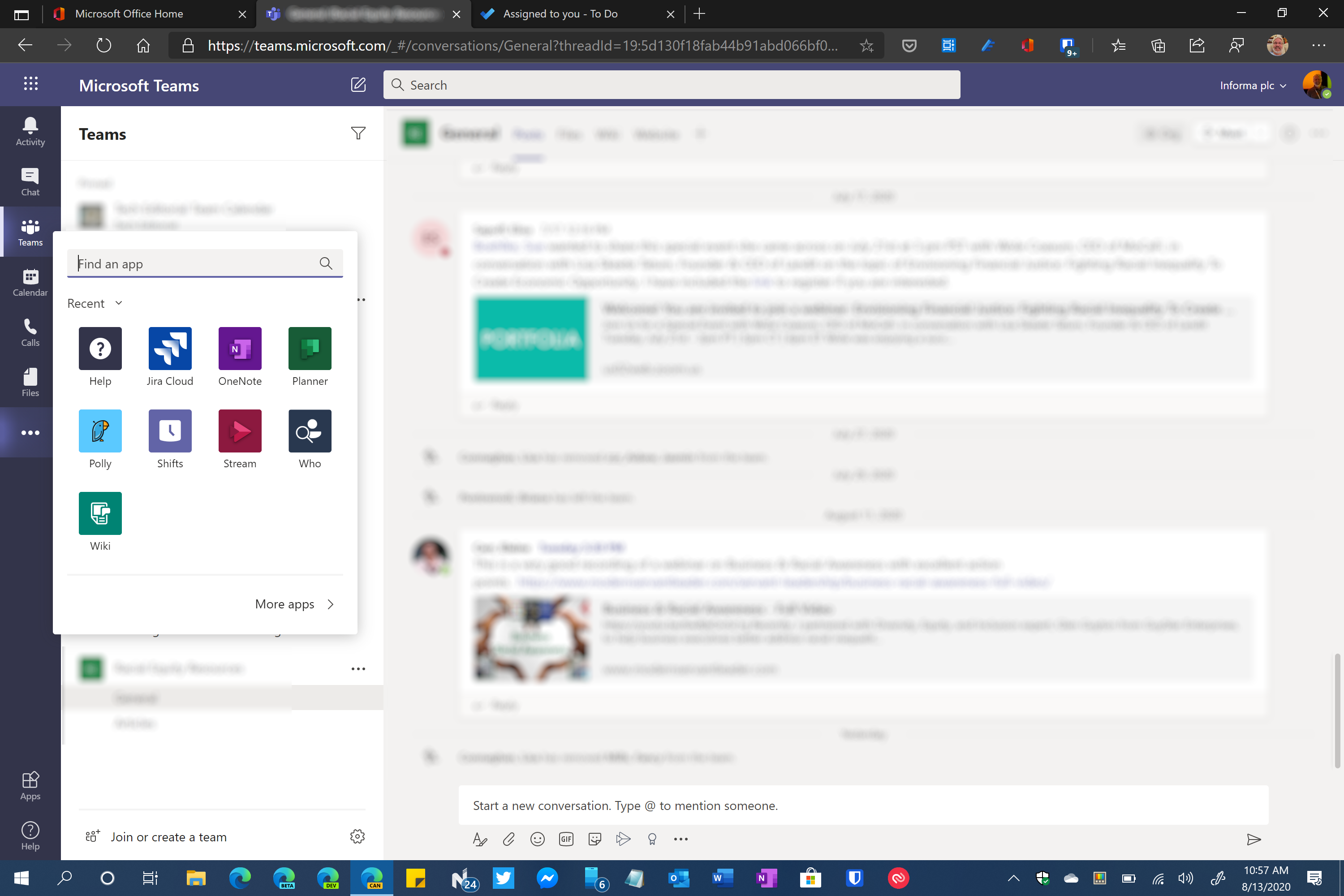 As mentioned earlier, when you search to add tasks to Microsoft Teams, search for Planner and then select that app to be included in the team channel. It will appear on the sidebar for easy access and tasks from Planner and To Do will both be present in this channel. Updates will sync from within Teams over onto To Do and Planner as changes are made.

Outlook on the Web

Users who access Outlook through the Office web portal can access their Microsoft tasks by selecting the To Do icon in the lower left-hand corner of the screen.

Microsoft To Do icon in Outlook on the web.

This will open Microsoft To Do in a new browser tab where full access to tasks from Planner and To Do will be available. All changes made to Microsoft tasks in this portal will be synched across the services. 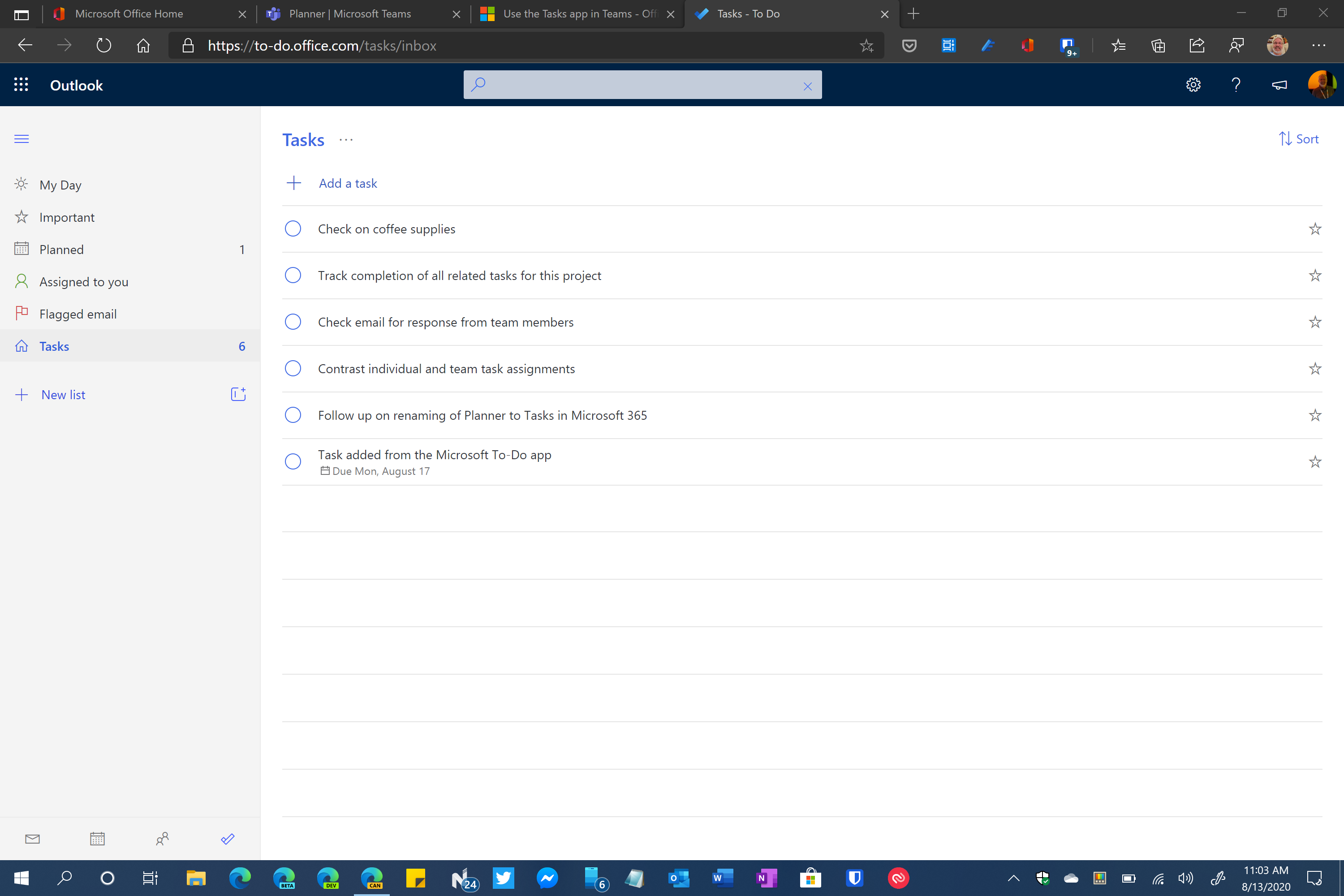 Microsoft To Do (Web)

In the proper Outlook mail program, tasks can be easily added using the New Items menu from the toolbar or by using the context menu on specific emails to create a task associated with that email. Tasks created in Outlook will sync with Microsoft To Do but not to Planner. However, tasks created within Outlook will be available anywhere Microsoft To Do is in use. That also means those tasks will sync to the Planner channel in Microsoft Teams. Even though these tasks all appear in the same Teams channel, they are sourced from the two different services, so they are still distinct and separate from Planner itself -- for now. Ultimately, these should all merge together and become a single pool of Tasks across all of Microsoft 365, with the ability to update them in any instance of the Microsoft tasks list. 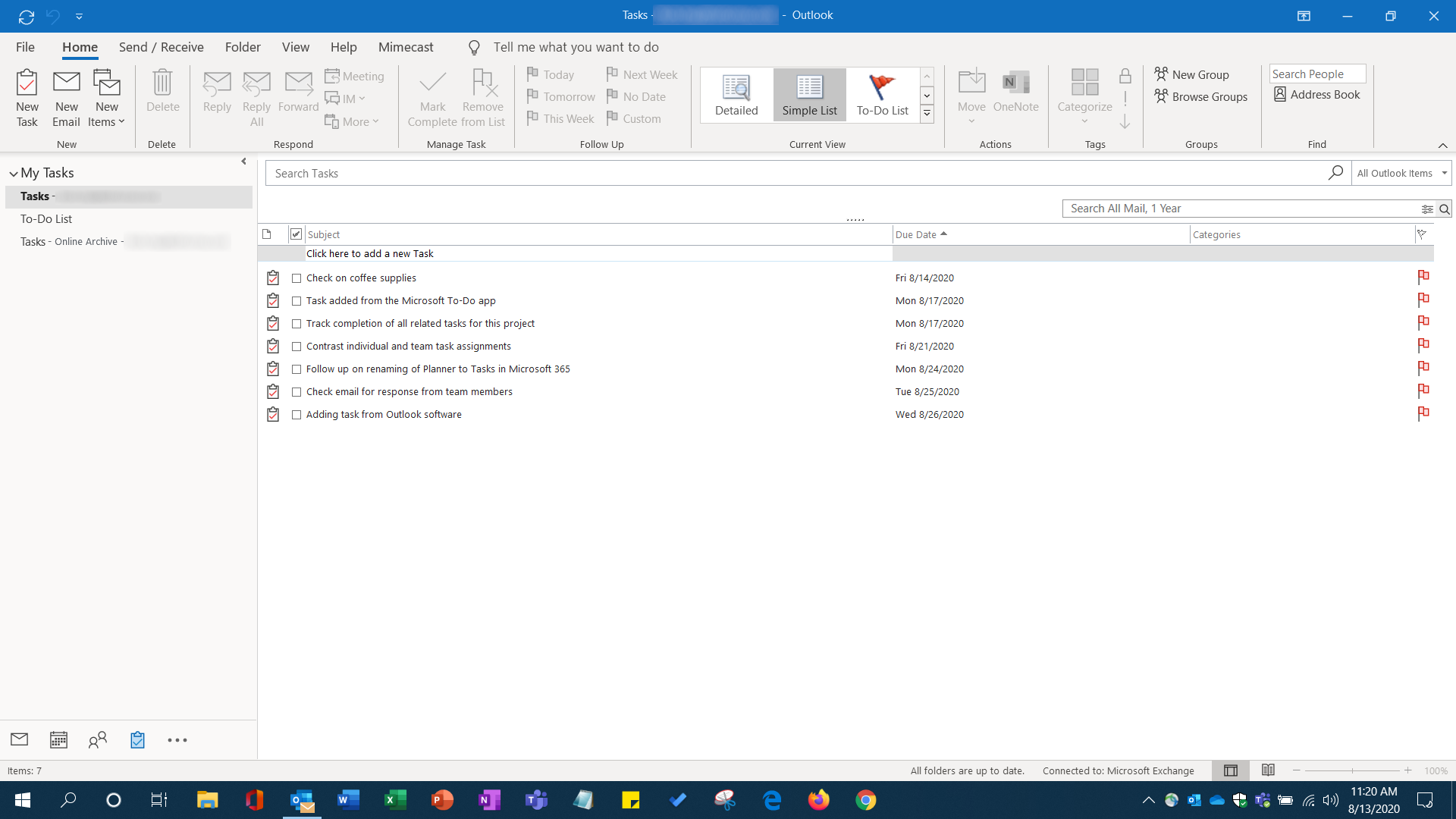 To Do tasks in Outlook (Desktop)

Changes made to tasks in Outlook will sync across all instances of Outlook and To Do both on the web and in apps.

Synching is involved in this process, but it only provides a view of assigned tasks that have due dates from Planner. In Planner, there is an option to create an iCal feed of all assigned tasks with a due date. When you select this option, an iCal feed will be created. Using a link right there on the dialog box, the iCal can be added to a user’s Outlook’s calendar.

Creating an iCal feed from Planner to Outlook calendar.

Once added to Outlook, assigned tasks will appear like this: 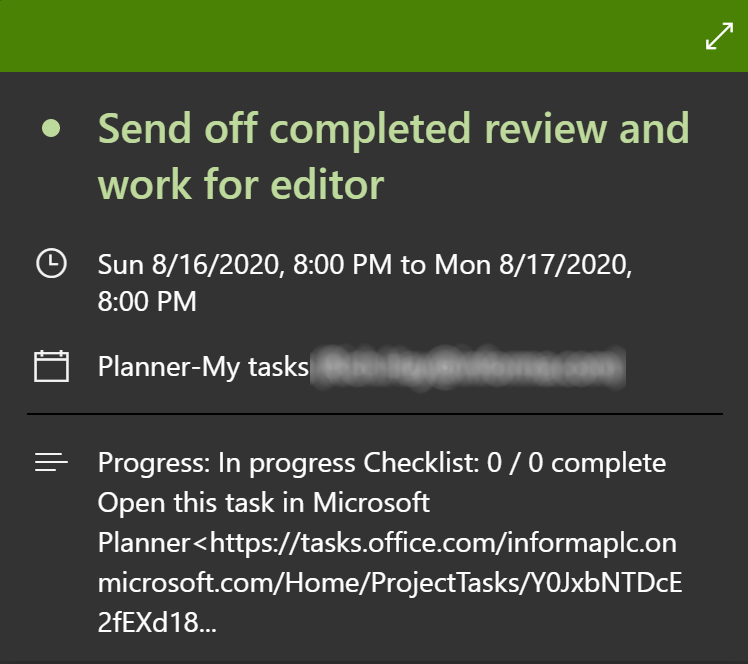 By expanding the details in the upper right-hand corner, a link to this task in Planner will be available. Clicking that will open Planner so the task can be updated and synched across all apps and services where Planner is available. This will include an updated sync back to this entry in Outlook calendar.

The Microsoft Tasks ecosystem across Microsoft 365 suffers because there is not a single portal and service for all tasks across the software and services suite, nor does everything sync up in a consistent way. Even in the current implementation of Planner and To Do in Microsoft Teams, the two systems do not share data in that channel.

If Microsoft wants to encourage a working approach where end users are focused on task execution regardless of the originating app – see the ability to edit spreadsheets outside of Excel, for example – then it will need to standardize the experience of managing Microsoft Tasks with the same approach it’s taken to other Microsoft 365 workflows.

Office users spend much of their time in Outlook and the productivity apps Word, Excel, and PowerPoint. Outlook is a perfect portal, alongside Teams, to enable the updating of tasks whether they originate in To Do or Planner. The disconnect in Outlook right now between these two services makes the early roll out feel very incomplete. Having access to all tasks in that communications tool is critical for success with the overall task ecosystem in Microsoft 365.