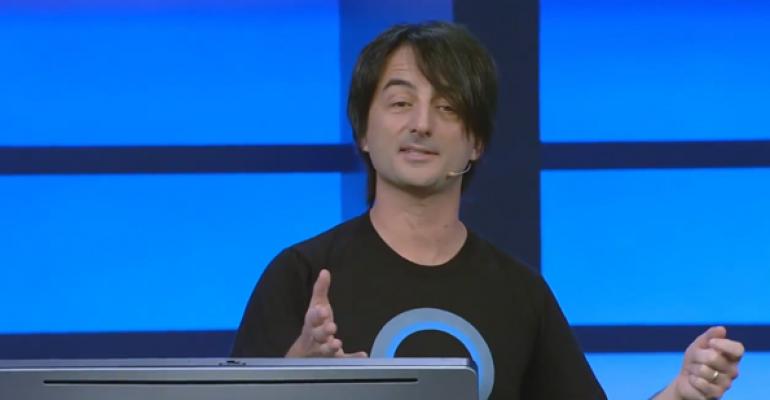 Stay calm and carry on, folks

After dealing with angst-filled complaints from Windows Phone users for months, Microsoft's Joe Belfiore this week tried to reassure fans that the firm "hadn't forgotten about" them. But he did so via the Chinese microblogging service Weibo, which would make sense if those frustrated fans lived in China. Which ... they don't.

This kind of thing makes me crazy—if only Microsoft had some other means of communicating with these fans. Maybe a corporate blog of some kind? No?—because it's emblematic of the inability to communicate that has hobbled Microsoft for years. And of the disconnect that the firm still has with its biggest fans, many of whom are thinking of jumping ship because "mobile first, cloud first" apparently really means "iOS and Android first, then we'll see what happens."

And seriously, I'm all about the brave face and stiff upper lip and all. But come on. Weibo?

Anyway, when it comes to improving mobile Office, suffice to say that 2014 saw the first-ever releases of full-blown Office for iPad, iPhone and Android, major improvements to Office Online, and absolutely no changes at all to the Office Mobile that's built-into Windows Phone, an app that dates back several years now with few if any improvements along the way. (There hasn't been a single meaningful change to Office Mobile since Windows Phone 8.0 shipped over two years ago, at the very least.)

What we did know before Belfiore's Weibo post was that Microsoft has been plotting an "Office Touch for Windows" for years, and that over time things have evolved. Now, Office Touch will be a universal app that works on both Windows and Windows Phone. And now it will be artificially delayed until the release of Windows 10, which paradoxically should see the "end" of Windows Phone anyway, since it will be reportedly melded with Windows RT into a single product. So Office Touch for Windows won't ship—in final form at least—until late 2015. Or later if Windows 10 is delayed again.

So. What did Mr. Belfiore actually communicate?

"I want to acknowledge the comments and letters you all have sent, noting that you've been frustrated seeing Microsoft launch new applications like Office on iOS and Android, without accompanying news around what will happen on Windows Phone," he wrote in his post. "I want to assure you that our Office team has not forgotten about Windows Phone – we're just aligning all of our news and announcements to a single event. You'll hear much more about what we have planned before Chinese New Year."

A quick Google Search reveals date is Thursday, February 19. Microsoft is holding a Windows 10 event in Redmond on January 21, which is almost exactly a month before that, so I suppose we should expect this news at that event or at some China-based event, perhaps, which could happen in the interim.

Don't live in China? Then you'll thrill to learn that Microsoft is also working hard to improve Windows Phone ... specifically for China. That stuff will be revealed in the coming months and ... whatever.

I assume and hope that Belfiore is simply trying to keep a lid on what Microsoft will announce later this month and that 2015 will be nothing like 2014. But as a long-suffering Windows Phone fan, I've received precious little good news this past year. I do understand the need to attract the next billion. But let's not actually forget about your current users and biggest fans in the process, Microsoft. Please.