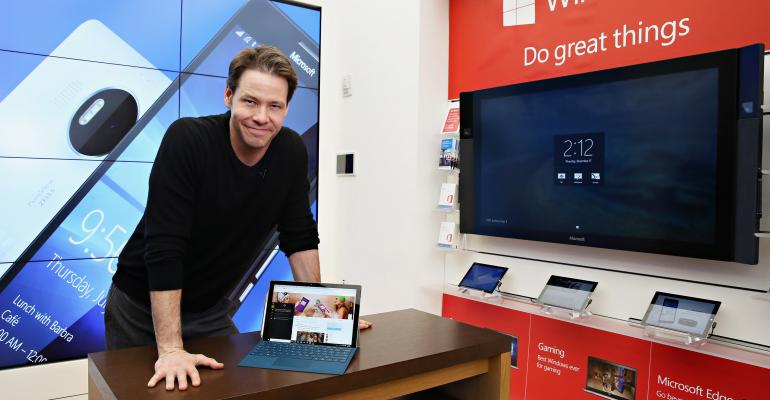 Microsoft Results to Get Lift From Office, Windows Cloud Bundle

As Microsoft Corp.’s popular Windows 7 software nears its expiration date, the company is funneling corporate customers toward a subscription-based package of products rather than a simple renewal, boosting revenue even as personal-computer growth stagnates.

(Bloomberg) -- As Microsoft Corp.’s popular Windows 7 software nears its expiration date, the company is funneling corporate customers toward a subscription-based package of products rather than a simple renewal, boosting revenue even as personal-computer growth stagnates.

The Redmond, Washington-based company reports earnings late Thursday, and results are expected to get a lift from Microsoft 365, a cloud-based bundle of the Windows 10 operating system, versions of Office productivity software, and security programs -- the products Microsoft’s business clients want to have for every worker.

Microsoft Chief Executive Officer Satya Nadella has been trying to shift more customers to subscriptions, which provide a smoother stream of recurring revenue. Unlike the older business model, where corporations bought each program outright and could use it as long as they liked, companies typically keep a subscription rolling -- otherwise they lose access to the software. The Microsoft 365 package of products was unveiled two years ago, and has gained greater traction this year, as customers replace aging Windows 7 licenses and as Microsoft signs Azure cloud-services deals that include the 365 software.

“This was a golden move by Nadella, as it has been a major catalyst for enterprises to upgrade,” said Daniel Ives, an analyst at Wedbush Securities. “Many fence-sitting customers have now gone to the M365 package.” Microsoft has yet to disclose total numbers of subscribers or revenue for Microsoft 365.

Microsoft for several years has been focusing on sales of internet-based software and seeking to gain ground in the web-services market on leader Amazon.com Inc. The company has also benefited from new Azure cloud contracts with big customers like Walgreens Boots Alliance Inc. and, last month, Providence St. Joseph Health. Some of those deals include Microsoft 365 sales -- Walgreens signed up to buy licenses for 380,000 workers, and Providence took 119,000.

The end of extended support for Windows 7 looming in January is one reason customers are switching to Microsoft 365, said Executive Vice President Rajesh Jha. After that, any customer who wants to remain on Windows 7 will have to pay for customized support updates to the operating system -- or go without. “Customers know Windows 7 is reaching end of life,” said Jha, who oversees Microsoft’s Experiences and Devices division. “And as customers modernize their desktop, they are also thinking of modernizing their Office to a cloud-connected version.”

The product links two of Microsoft’s main historical revenue streams -- Windows and Office -- leveraging the appeal of cloud software and continued corporate reliance on Windows. While Microsoft has topped forecasts in recent quarters on the strength of its cloud programs, Windows has also frequently performed better than the overall PC market.

Walgreens wanted the software so it could update in-store systems that are running Windows 7, according to Vish Sankaran, chief innovation officer at Walgreens Boots. Previously, many of the company’s retail staff didn’t have access to these programs at all -- they were reserved for managers and people back at corporate headquarters. That’s also part of Microsoft’s push with M365: to convince customers like retailers, health-care outfits and industrial firms to buy software for front-line workers, like nurses and pharmacists, who will use software to better keep track of patients and tap Microsoft’s Teams chat app to coordinate care. If successful, it will add up to more paying users.

In its fiscal fourth-quarter earnings report after the close of the market in New York, Microsoft is projected to say sales rose 9% to $32.8 billion. Profit in the period ended in June is predicted to be $1.22 a share, the average estimate of analysts surveyed by Bloomberg.

Microsoft’s shares have risen 34% this year. Its market value has jumped above $1 trillion, making it the most valuable publicly traded company. The company is riding a wave of cloud-computing contracts and a renewed role as a tech-market leader after Nadella overhauled the software maker’s strategy, engineering and and sales execution. That has attracted investors to the stock, along with Microsoft’s apparent insulation from the regulatory investigations facing some of its biggest rivals.